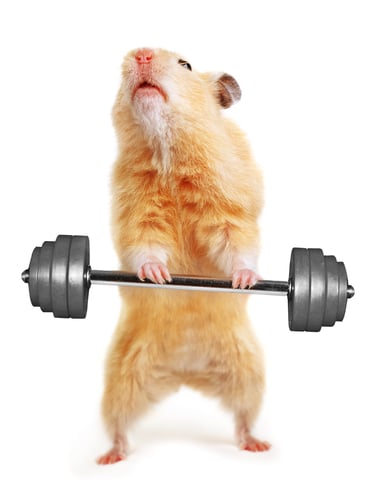 You already know that exercise has health benefits, but a recent study points to another reason why. Researchers from the Dana-Farber Cancer Institute and Harvard Medical School recently isolated a hormone that may explain why working out helps to keep us lean and lowers the risk of some diseases such as type 2-diabetes. This hormone called irisin may be key to understanding the health benefits of exercise.

Researchers discovered that exercise stimulates the release of a protein that plays a role in energy metabolism. This protein called PGC1-alpha goes on to stimulate the release of another protein, which in turn causes the hormone irisin to be produced by muscle cells. Once irisin is born in the outer membrane of the muscle, it doesn’t just stay there. It makes its way to fat cells where it interacts with them in a positive way.

White Fat vs. Brown and Why We Want More Brown

As you already know, there are two types of fat. There’s garden variety white fat that ends up stored in areas where we don’t want it like on our hips and tummies. Then there’s the more elusive brown fat. Brown fat is metabolically more active fat, producing more heat. Unlike white fat, brown fat actually uses energy and burns calories, which is a good thing if you’re trying to keep your weight under control.

Unfortunately, we lose most of our brown fat with age and what we have left becomes less active. Babies have large amounts of brown fat to keep them warm, but as they grow older they lose the majority of it. Some adults still have small amounts of brown fat mostly in their upper chest and neck area.

So what does brown fat have to do with exercise and irisin? When irisin leaves muscle tissue to travel to fat cells, it converts white fat to metabolically-active brown fat. How good could that be? Very good according to researchers. Irisin may offer benefits for people who are obese or have type 2-diabetes. Irisin has the added benefit of reducing insulin resistance, a common problem among obese people and those with type-2 diabetes.

What kind of exercise is best for boosting levels of this hormone that converts jiggly white fat to metabolism-boosting brown fat? In mice, jogging on a wheel raises irisin levels by as much as 65%, and the irisin appears to hang out in the body after the mice stop running. Would resistance exercise have the same effect? Scientists plan to do studies to find out how irisin levels are affected by different kinds of exercise and how much exercise is required to maximize its effects.

The Benefits of Exercise without Working Out?

One intriguing question is whether irisin can simulate the effects of exercise without having to lace up a pair of exercise shoes at all. To find out, they injected mice with irisin for 10 days in amounts comparable to what they would get through exercise. The results? The mice lost a small amount of weight, and their insulin sensitivity improved without stepping foot on a mouse spinning wheel.

But don’t think that you could simply inject yourself with irisin and get all of the health benefits of exercise. It doesn’t explain how exercise improves cardiovascular function or boosts mood and brain health. There’s still no substitute for moving your body. On the other hand, irisin may help some obese people and people with type 2 diabetes that aren’t able to work out.

The “exercise hormone” irisin may have benefits for people who suffer from obesity and type 2 -diabetes, and it may help convert white fat stores to brown ones while increasing metabolism. As of now, the only way to get the benefits of irisin is to exercise, and that’s one more reason to get up off the couch.

The Exercise Hormone – but is There Such a Thing?

Brown Fat: The Kind of Fat That Keeps You Thin

How Your Body Fights Fat Loss

Exercise After-Burn: Does a New Hormone Explain This Phenomenon?