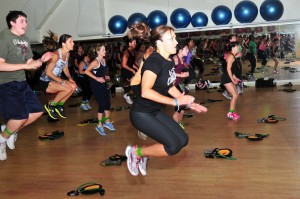 One of the benefits of exercise is the effect it has on levels of human growth hormone. Growth hormone is a hormone produced by the pituitary gland in the brain and plays a critical role in growth during childhood, but its importance doesn’t stop there. Growth hormone also has positive health benefits for adults by helping to build lean body mass and stronger bones. It also plays a role in fat-burning. Fat cells have receptors for growth hormone on their surface. When growth hormone binds to these receptors, it stimulates the breakdown of fat and blocks its synthesis. Unfortunately, growth hormone levels begin to decline after the age of 30, a factor that’s partially responsible for the increase in body fat and loss of muscle mass people experience as they age. The good news is exercise boosts growth hormone levels naturally and that has favorable effects on body composition – but you need more than a walk in the park to increase growth hormone levels.

High-intensity interval training works well for boosting growth hormone levels because it allows you to work hard for short periods of time without becoming fatigued to the point you have to stop. High-intensity workouts are the most effective for producing an after-burn, the state where you continue to burn calories even after you stop exercising. Long sessions of moderate-intensity exercise don’t give you the same after-burn.

When it comes to increasing growth hormone levels and burning fat, high-intensity exercise will give you a greater boost than moderate-intensity cardio sessions. If you haven’t tried high-intensity interval training, you’re missing out on a way to add variety to your workout and get leaner at the same time. It’s also a good way to break out of a weight loss plateau and reduce boredom. Give it a try.

Resistance Training and Testosterone: What Role Does It Play in Women?

One thought on “How High-Intensity Exercise Affects Growth Hormone Levels”