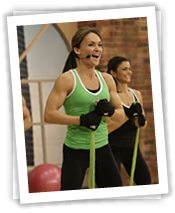 Before there was Zumba, Tae Bo, Spinning or even Step Aerobics, fitness video pioneer Cathe Friedrich recognized the need to provide a simple, flexible, affordable and motivating way for Americans to exercise and stay fit. Nearly thirty years and over 300 DVDs later, thousands of people have credited Cathe Friedrich for helping them to transform their bodies and their lives with her videos and TV appearances.

Like going through life with a friend, Cathe’s followers have grown in their workouts as she has learned and expanded her video offerings, staying focused on Cathe’s three guiding principles: Professionalism, Passion, and Quality.

Cathe is often credited with being the first to bring advanced fitness videos to the home exerciser and helped shatter the theory that only celebrities could star in fitness videos. As a certified Group Fitness Instructor, Cathe has taught thousands of classes at her New Jersey health club and has helped to train many of today’s top instructors.

As a leading innovator in the home exercise video industry, in 1988 she founded Step N Motion Videos and in 1989, created one of the first ‘step’ aerobic videos. Cathe continues to produce fun, intense, and challenging workouts for all body types and fitness levels. Her award-winning workouts have been featured in the New York Times, Wall Street Journal, Dallas News, Fox Business News, QVC and the Philadelphia Inquirer. Health and fitness writers have published articles about her in Shape, Oxygen, Self, Health, Fit, Consumer Digest and Fitness magazines.

Cathe continues to stay cutting edge through her Cathe Live streaming channel, OnDemand offerings, and mobile fitness apps.  Cathe prides herself on staying true to three guiding principles: professionalism, passion, and quality.  Her dedication to her craft and to the fitness industry led to her induction into the Fitness Hall of Fame in 2011.

While appearing on Fox Business News, Cathe told her story of how she got started. When she was 16, she took an aerobics class. Three weeks later, was asked to teach it and she was “hooked.” A few years later, Cathe was teaching a creative movement class at a fitness studio on the top floor of Carnegie Hall, where she used fourteen-inch benches as part of her workout. At the same time, Step Reebok was launching what is now known as “Step Aerobics” to the world. Cathe incorporated step into her philosophy, creating her first video, “Step N Motion One,” which was also one of the first and most influential step aerobic videos of its time. Today, her fitness empire includes all types of workouts and is one of the largest privately owned fitness video libraries in the world.

Always on the cutting edge, Cathe recognized the power of the internet and was the first to sell fitness videos online nearly 20 years ago. Today, Cathe.com is one of the largest and most visited fitness websites and Cathe’s pioneering work in this area has inspired other instructors to market and promote their own fitness videos in a similar fashion. Today, she continues to be a trendsetter with her DVDs, Ripped with HiiT, XTrain,  STS Fitness Program, digital downloads, iPhone apps, and fitness tracking software.

Collage Video, a source for exercise videos since 1987, says this about Cathe on their web site: “Since the early 1990s, Cathe Friedrich’s videos have set the standard for ‘challenging workouts’. Cathe Friedrich’s workout video technique is excellent; her cuing style is very direct. These exercise videos will challenge even the elite athlete!” The Dallas Morning News wrote: “To say that Cathe Friedrich workout videos are tough is like saying Everest slopes upward.” Fit TV declared: ” Cathe is one the most popular trainers on our network. She is a power-intense cardio-buster, a punch and crunch trainer.”

To bring her workouts and her message of healthy living directly to her fans, known as “Cathletes”, Cathe offers national road trips which give her a unique opportunity to meet many of her loyal followers in person (something Cathe really loves to do.) She also keeps in touch with her fans by embracing new technology, frequently updating her web page, blogging, Tweeting, posting on Facebook and continually answering questions in her forums.

Cathe is the mother of two boys, Eric and Kyle.