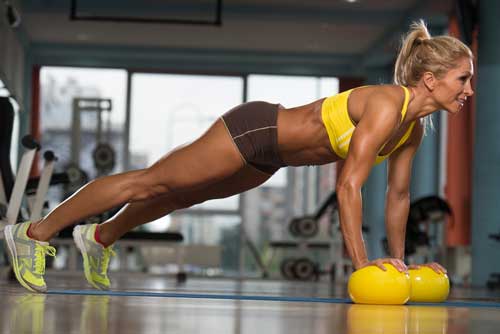 You’re probably already familiar with hormones, chemicals released into the bloodstream that affect organs distant from the site where the hormone was released. An example? You need growth hormone for growth and development and for keeping your bones and muscle fit and strong as you age. Of course, it also helps if you weight train.

Exercise can influence a variety of hormones you’re familiar with, including insulin, cortisol, glucagon, and others. Here’s where it gets interesting. A recent study in mice shows exercise stimulates the release of a novel hormone appropriately named musculin. Unlike growth hormone, released by the pituitary gland in the brain, muscle cells release musculin in response to exercise.

What does this novel, muscle-derived exercise hormone do? It causes a cascade of events that ultimately leads to greater exercise endurance. For one, it seems to increase the number of mitochondria inside muscle cells. When cells have more mitochondria, they can produce more ATP to drive prolonged exercise. So, musculin may be one of the factors responsible for building exercise endurance, giving you the power to push through that cardio workout without becoming too winded.

Exercise Hormone: Your Muscles as an Endocrine Organ

As you can see, your muscles are more than clusters of muscle fibers that contract in such a way as to allow movement. There’s growing evidence that muscle is an endocrine organ, a tissue that produces hormones. In fact, musculin isn’t the only hormone muscles make. Research shows muscle tissue releases two other hormones that are likely responsible for some of the health benefits you get from exercise.

One of the two other hormones your muscles produce is called irisin. When your muscles contract during exercise, irisin is released into your bloodstream. Once there, this hormone-like molecule redirects fat cells, telling them to burn more stored fat as energy rather than hoarding it. You can imagine what that could do for your waistline.  What’s most effective for release of irisin is high-intensity interval training and exercise involving large muscle groups.

Did you know irisin is also good for your metabolic health? One way in which irisin offers metabolic benefits is by turning white fat, the ordinary kind we store on various parts of our body, to brown fat, a type of fat that is inefficient and produces mostly heat. Wasting calories and releasing them as heat may sound inefficient, and it is, but it helps you ward off weight gain. Scientists are looking for ways to turn white fat to brown fat and to activate quiescent brown fat. Exercise by boosting irisin is one way to potentially do that.

Lest you think aerobic interval training is the only way to bump up irisin, resistance training does too, so grab a pair of weights and focus on working the large muscle groups in your lower body and back.  Bonus: Irisin is also linked with greater insulin sensitivity and a lower risk for metabolic syndrome and type 2 diabetes.

Another hormone-like compound released by muscle tissue in response to exercise is called interleukin 6, or IL-6. Also referred to as a myokine, IL-6  was once thought to be pro-inflammatory, although it appears to mediate some of the benefits of exercise. As researchers in one study point, IL-6 may promote inflammation, in some cases, but it’s also likely it has anti-inflammatory benefits. Some research suggests it can have pro OR anti-inflammatory effects depending on the situation.

The type of exercise you do doesn’t seem to matter in terms of IL-6 release. Any type of exercise where muscles contract ramps up IL-6 release, but to really get a significant increase in bloodstream IL-6 you need to exercise for a sustained period of time and work large muscle groups. According to research, you produce more IL-6 the more muscles you use and the longer you exercise. In fact, your IL-6 level may be as much as 1,000 times higher after a sustained workout than at baseline. Some research also suggests that as you become better trained and your body adapts to exercise, IL-6 release goes down.

What role does IL-6 play? Its job is to make sure your muscles have enough energy to sustain exercise. Once released, IL-6 travels to liver and fat tissue where it boosts the breakdown of liver glycogen, so your muscles can use it for fuel, and ramps up the breakdown of fat stores, to serve as a source of energy during exercise. It also increases resting energy expenditure, giving your metabolism a boost.

If IL-6 increases inflammation in some circumstances, how could it be beneficial? People who are sedentary tend to have higher IL-6 levels at rest relative to those who exercise regularly. Although an acute bout of exercise raises IL-6, sometimes dramatically, if you exercise regularly you’ll like have a lower level of IL-6 at rest. If IL-6 is truly pro-inflammatory, that would be beneficial. As you can see, there’s a lot more to learn about IL-6.

Yes, your muscles really are a hormone-producing factory and, as this new study shows, there’s a new one you can add to the list – musculin.  The next time you’re doing a workout, think about all the activity going on inside those busy muscle cells and you’ll realize you’re not the ONLY one working hard!

Science Alert. “The verdict is in: feel-good exercise hormone irisin is real”