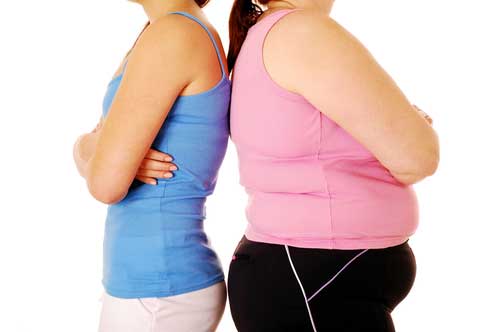 At one time, scientists thought there was only one kind of body fat – white adipose tissue – the kind that stores energy and deposits in all of those places you don’t want it – but a lot has changed in the last few decades. Now we know there’s more than one kind of fat cell and some types of fat work in your favor when it comes to staying lean. The kind of fat you WANT to have around is brown fat or beige fat.

Brown fat is a type of adipose or fatty tissue, babies have in abundance. If you looked at brown fat under the microscope, you’d see its dark in color, much darker than white fat cells. The reason brown fat cells contain some pigment is that they’re filled with mitochondria. Mitochondria are tiny organelles that produce ATP, the chemical energy that allows muscle cells to contract and produce movement. The enzymes mitochondria use to make ATP are dark in color because they contain iron.

Brown fat with its abundance of mitochondria functions differently than white fat, a form of fat whose main job is storing fat for later use. The main function of brown fat is to produce heat to keep a newborn baby warm. It does this by “uncoupling” the normal pathway mitochondria use to produce energy. Rather than produce ATP, this uncoupling process generates heat to keep a newborn baby warm. Babies don’t develop the ability to shiver until later so they need this internal source of heat.

What does this have to do with staying lean? The uncoupling process inside the mitochondria of brown fat cells releases wasted energy in the form of heat. This uncoupling process converts calories from the food you eat directly into heat rather than ATP. As a result, those calories are wasted. It’s not hard to see how having active brown fat could make weight control a little easier. In fact, there’s research looking at ways to turn on brown fat as a way to fight the obesity epidemic.

At one time, scientists thought people lost all of their brown fat after birth, but PET scans in adults show some brown fat remains, around the neck and clavicle area. Having more active brown fat might explain why some people are naturally thinner. Certain things can turn on brown fat. Not surprisingly, one of them is exposure to cooler temperatures. Another thing is moderate-intensity exercise. During exercise, muscle cells release a protein called irisin. It’s irisin that seems to activate brown fat. Irisin is also released when you’re exposed to cold and shiver.

Some experts propose one factor contributing to the obesity epidemic is the fact most people work in a temperature-controlled environment where the temperature is a comfy 70 degrees Fahrenheit, not low enough to activate brown fat.

To confuse matters, researchers recently identified a third type of fat called beige fat. Beige fat cells are actually a hybrid of brown fat and white fat. If you look at a beige fat cell under the microscope, you’ll see pockets of lipid, or fat, scattered among clusters of mitochondria, many more mitochondria than you find in a white fat cell. These beige fat cells have the capacity to store fat, just like white fat cells, but can also increase heat production and waste calories like brown fat cells.

It turns out what scientists originally believed was brown fat in adults is actually beige fat. These beige fat cells can perform the function of either white fat or brown fat. When you’re in a warm, snug environment and aren’t very active, beige fat cells behave like typical white fat cells and accumulate fat for storage. But when you enter a cold environment or begin exercising, beige cells behave like brown fat. They produce heat and convert dietary calories into wasted energy. Beige fat cells have the remarkable ability to change their function based on your metabolic needs.

Researchers are actively looking for ways to turn on beige fat cells. They dream about the possibility of developing drug treatments to turn on heat production and thermogenesis in beige fat cells. Fortunately, there’s a natural way to do it – increase the amount of irisin muscle cells produce. As mentioned, irisin is an activator of beige fat, causing it to behave like brown fat.

Research shows exercise is a potent stimulator of irisin. This makes sense since muscle contraction is a stimulus for its production. Irisin is sometimes referred to as the “exercise hormone,” based on the belief that it’s responsible for many of the health benefits of exercise. For example, irisin stimulates the release of a brain-protective protein called BDNF in animal studies. A number of studies show exercise enhances memory and cognitive function – and irisin and BDNF may explain some of these benefits. So, increasing irisin has a number of health benefits.

The other way to increase irisin and, in turn, activate beige fat is by turning back the thermostat. In one small study, participants that spent several hours a day in a 60 degree Fahrenheit room for 6 weeks experienced an increase in beige fat and lost body fat as well. Some people have proposed wearing an ice pack around their neck since most beige fat is found in the neck and clavicle region or taking a cold shower to activate beige fat. Would it work? Nobody knows – but it makes sense.

The Science of Fat Cells: What Happens to Fat Cells When You Lose Weight or Exercise?