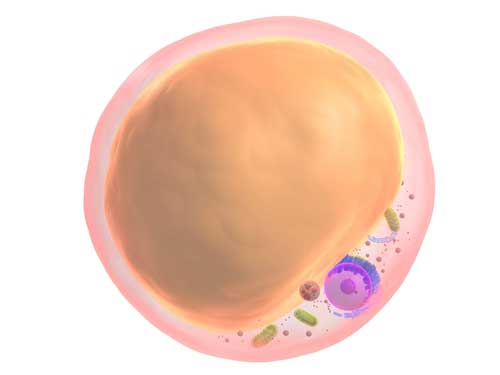 Fat cells – they serve a useful purpose but you don’t want too many of them. Fat cells aren’t just passive little sacks that store energy and help to keep you warm – they’re little mini-endocrine organs, pumping out chemicals called cytokines and CRP (c-reactive protein) that cause inflammation, contribute to insulin resistance and increase the risk for heart disease. In addition, fat cells produce leptin, a hormone involved in appetite control. Adipose or fat tissue also has a remarkable ability to expand. In cases of extreme obesity, adipose tissue can make up half of a person’s body mass. How does fat tissue change when you lose weight, gain weight or begin an exercise program?

You may have heard that you don’t create new fat cells as an adult – when you gain body fat, existing fat cells become larger. It’s true that fat cells increase in size when you gain fat. This happens as new lipids that aren’t used for energy are stored. The bad news is you maintain the ability to produce new fat cells. In fact, you don’t lose the ability to produce new ones regardless of your age. What’s true is people with a tendency towards obesity develop a larger number of fat cells during childhood. They’ll retain this number of fat cells throughout life. Hence, they have a larger capacity to store fat as adults. A healthy adult of normal weight would have around 30 billion fat cells whereas a morbidly obese individual may have up to 300 billion.

According to researchers at the Karolinska Institute in Sweden, the number of fat cells you have as an adult is established when you’re a child. Still, your body has to produce new fat cells due to fat cell turnover. Throughout life, a certain percentage of the fat cells you have in your body are broken down and replaced by new ones due to turnover. As a result, you retain roughly the same total number of fat cells throughout your existence regardless of how much body fat you lose due to turnover and replacement. Even people who lose very large amounts of weight or have bariatric surgery have roughly the same number of fat cells they had as a child. As some experts point out, a drug that blocks the synthesis of new fat cells during fat cell turnover and regeneration would be an effective target against obesity. So far, it hasn’t been developed.

According to one study published in the journal Nature, fat cell turnover may be slower in people who are obese compared to normal-weight folks. This research showed normal weight people turn over fat cells about every 1.5 years. In contrast, obese people only break down and regenerate fat tissue approximately every 10 years. As a result, fat cell storage is out of sync with fat cell turnover and destruction. The result is an accumulation of body fat. Other research shows about 10% of a person’s fat cells are destroyed and replaced through turnover every year, regardless of body weight.

Shrinking the Number of Fat Cells

Now you know the number of fat cells you have stays pretty much the same throughout life – so what happens when you lose body fat? The only alternative fat cells have is to shrink in size. When you gain body fat, the opposite happens. Existing fat cells increase in size or hypertrophy. It’s large, swollen, hypertrophied fat cells that are most closely linked with metabolic problems like insulin resistance. Hypertrophy is the primary way you gain body fat as an adult since the total number of fat cells you carry as an adult is established during childhood. The increase in size you see is due to increased storage of lipids.

It’s no secret that regular exercise, both resistance, and aerobic training, help control body fat. When you exercise, fat-burning hormones like growth hormone, epinephrine, and norepinephrine mobilize lipids from fat cells so they can be used for energy – but this may not be the only way regular exercise changes fat cells.

According to a study carried out at Lund University in Sweden, exercise changes the expression of genes involved in fat metabolism and storage. Exercise seems to reduce the expression of genes that turn on fat storage by methylating DNA. When genes are methylated, it blocks their expression. Methylation appears to be an important method for controlling the expression of other genes as well. That’s why the genes you inherit aren’t always destiny.

Research also shows moderate-intensity aerobic exercise releases a hormone called irisin from muscle cells. Irisin has the power to turn on genes that convert ordinary white fat to dynamic, energy-wasting “brown fat.” How is this of benefit?

Unlike white fat, brown fat is very inefficient. It converts large amounts of chemical energy to heat and may be helpful in controlling body weight. Babies have large amounts of brown fat to generate heat to keep them warm. By the time kids reach adulthood, they usually have limited stores of brown fat remaining. Brown fat offers a thermogenic boost that may help with weight control. Higher levels of brown fat have been linked with lower body weight. Exercise and exposure to cold both seem to “turn on” inactive brown fat.

Now you know how you gain body fat. You can shrink fat cells through diet and exercise but you won’t decrease the total number of fat cells in your body. Exercise is a strong ally in the battle against excess body fat. Not only does it burn body fat, but it may also alter the expression of genes associated with fat storage and activate brown fat. Make it a part of your weight control arsenal.

Science Daily. “Embrace the cold: Evidence that shivering and exercise may convert white fat to brown”

Is Being Physically Fit or Fatness More Important for Longevity?

Types of Body Fat: White Fat, Brown Fat and Beige Fat and What They Mean for Your Waistline

One thought on “The Science of Fat Cells: What Happens to Fat Cells When You Lose Weight or Exercise?”