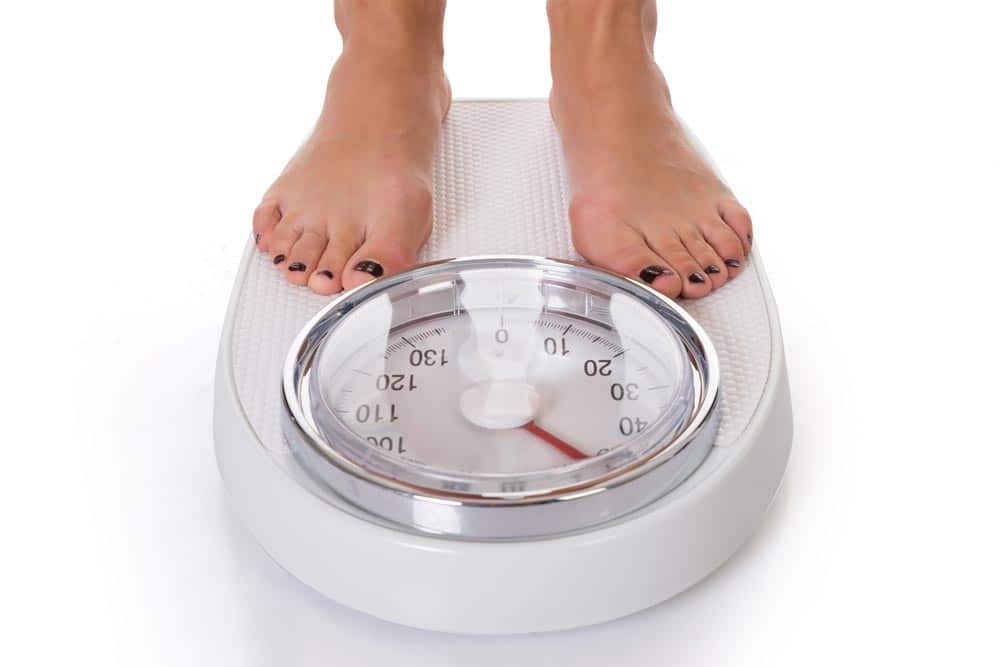 Do you weigh most days of the week? There are benefits to doing so. Studies show that people who weigh on a daily basis are less likely to be surprised by “sneaky” weight gain, pounds that appear when you aren’t watching the scale. By monitoring what the scale says and reacting quickly to small weight changes, you keep them from becoming larger ones. In fact, studies show that a daily weigh-in is linked with better weight control and less weight gain over time.

At the other end of the spectrum are those who argue that weighing daily is too obsessive and we should use how our clothes fit and how we feel as a measure of whether we’re a healthy body weight. After all, obsession with the scale, at worst, can fuel eating disorders, something we want to avoid at all costs.

Both arguments are correct to some degree. We shouldn’t be obsessed with the scale but it’s probably not wise to completely ignore what it says either. Yet, it’s important to know that the bathroom scale reflects not just fat gain, but weight gain from other factors as well. When you wake up one morning and the scale says you’re three pounds heavier, it doesn’t necessarily mean you’ve gained body fat.

Even if you went on a crazy splurge, it’s unlikely the extra pounds you see on the scale the next morning are a reflection of increased body fat. To gain a pound of body fat, you’d have to take in 3,500 extra calories above and beyond maintenance. Most of us don’t consume that number of extra calories even on a splurge day.

So, why does weight seemingly increase a few pounds overnight? Let’s look at some of the possible reasons.

Weight Gain Due to the Impact of a Big Meal

When you eat a meal that’s larger than you’re accustomed to, for example, on Thanksgiving Day, you might see that your weight climbs a few pounds relative to what it was before that mega-meal. It’s not uncommon for body weight to increase from 2 to 5 pounds after overindulging. If you step on the scale within hours of that meal, you’ll weigh more simply because of the weight of the food you took in.

Typically, though, a bigger factor is water weight gain. If the meal you ate was high in sodium, you’ll retain fluid and it can take up to three days to lose the extra fluid. Plus, you’ve filled up your muscle glycogen stores and glycogen holds on to extra water. So, you get some water weight gain due to glycogen replenishment. If you were eating a low-carb diet prior to a big meal, your glycogen stores were low already, so weight gain from refeeding will be more pronounced.

As counterintuitive as It might sound, the best way to reverse water weight gain is to drink more water and restrict the salt content of your diet. Drinking more water helps flush the excess sodium out of your system and reverse the bloating, but it can take a few days for equilibrium to restore itself, so be patient.

Weight Fluctuations Due to Hormonal Factors

You may have noticed that your weight fluctuates based on where you are in your menstrual cycle. Up to 5 days before a menstrual period, you may experience a gradual rise in body weight due to your body holding on to fluid. The amount of weight gain varies, but the average woman gains around 4 or 5 pounds with the weight typically peaking on the first day of menstrual bleeding. Once your menstrual period starts, you gradually lose the excess fluid. Studies show that active women, particularly runners, may have a more pronounced rise in body weight prior to a period.

Hormonal fluctuations around the time of a period also impact brain chemicals including serotonin, a neurotransmitter that regulates appetite. So, you might find yourself eating more right before your period and attribute the weight gain to having the munchies. Yet, more than likely, that premenstrual bump up in weight is mostly water weight. The best solution is to drink more water and reduce your sodium intake.

If you take a birth control pill or are on hormone replacement therapy that contains estrogen, you might notice that your weight increases a few pounds. Estrogen causes your body to hold on to water. So, most of the weight gain is due to water weight rather than a gain in body fat.

Yes, constipation can cause your weight to rise. If you compare your weight before and after a bowel movement, you can see a weight drop of as much as 3 pounds. To tackle the constipation problem, stay well hydrated and make sure your diet contains lots of plant-based, high-fiber foods. Caffeinated coffee also has a laxative-like effect. So, sipping a little coffee throughout the day may help you stay more regular and avoid constipation-related weight gain.

What if daily weight fluctuations cause you to bite your fingernails? Rest assured that every pound your weight rises isn’t due to an increase in body fat. Remember too, if you’re lifting weights, you may be gaining muscle. Short of getting a body fat scale that measures your body fat percentage, consider weighing yourself only twice a week to avoid obsessing too much on daily weight fluctuations. Also, weigh first thing in the morning after emptying your bowels and bladder. If you’re close to your period or you ate a salty meal, realize that your weight may be up by a few pounds due to water retention.

Stay well hydrated and reduce the sodium content of your diet to reduce fluid retention. Don’t forget that most of the sodium in the American diet is from processed foods, not the salt shaker. So, limit how many processed and packaged items you eat. Most processed foods aren’t body composition friendly anyway. If you do buy a packaged product, read the label. The sodium content of foods is deceptive. Many items you wouldn’t expect, such as soup, condiments, and even cottage cheese, are high in sodium. Restaurant food is another culprit. Restaurants add lots of salt because it makes the food taste better.

Not all weight gain is fat gain. Keep that in mind when you weigh – and don’t be too obsessed with the number on the scale. If you’re eating right and moving your body, you’re already doing something right!