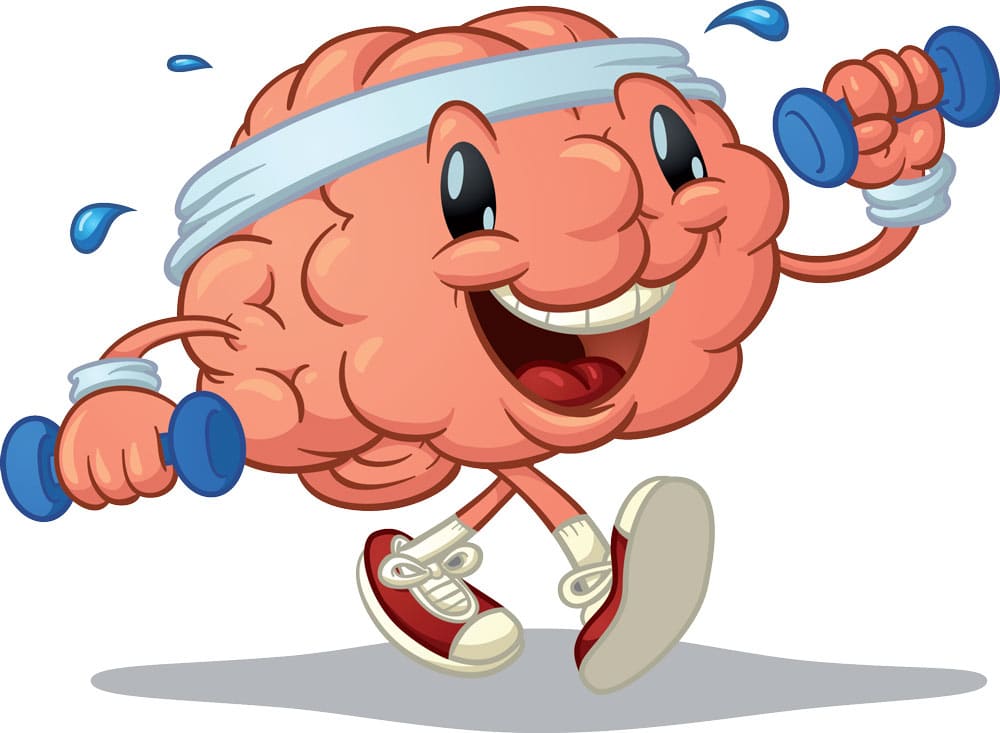 Exercise might be the best medicine that you can’t stuff into a pill bottle. Studies show that physical activity enhances the health of every organ in your body, including your brain. Whether or not we like it, our brains change with age. Memory declines as we grow older and it becomes harder to retrieve information, like the name of that acquaintance you haven’t seen in years. Their name is on the tip of your tongue but you just can’t spit it out!

In addition, research shows that people with dementia and mild cognitive impairment, a less severe form of forgetfulness, have less volume in their hippocampi. Researchers have verified this using MRI imaging.  People with dementia often have pronounced shrinkage of this region of the brain, but even healthy people experience some volume loss in the hippocampi as they age.

Physical exercise also helps preserve a portion of the brain called the prefrontal cortex, a brain region involved in decision making and planning. In fact, some research shows that aerobic exercise boosts the size of this part of the brain. One study of older adults found those who took part in an aerobic exercise program experienced greater improvement in measures of cognitive performance than did a control group who did stretching and toning exercises.

How does exercise improve brain health? During exercise, you deliver more oxygen to your brain. In addition, aerobic exercise boosts the production of brain-derived neurotrophic factor (BDNF). Some scientists liken BDNF to fertilizer for the brain. That’s because this hormone-like substance produced in the brain’s cortex fosters the development of new nerve cells and new nerve cell connections through a process called neurogenesis. It also explains some of the cognitive benefits of exercise.

Exercise boosts brain health in other ways, too. We know that moderate physical activity reduces inflammation and helps with blood sugar control. This is important since chronic inflammation and elevated blood glucose can both damage the brain. In addition, physical activity reduces stress and helps with sleep. Lack of sleep and chronic stress harm the brain too. One study found that a single night of missed sleep boosted levels of beta-amyloid in subjects’ brains by 5%. Beta-amyloid is proteins that accumulate in the brains of people with Alzheimer’s disease and are a hallmark of the condition.

Physical Exercise and Mental Exercise Together May Offer More Benefits

Does the same hold true in humans? Researchers are now looking at the impact of combining physical exercise with cognitive challenges in humans with declining memory and brain health. The results look encouraging. One study found that subjects with mild cognitive impairment, a decline in brain health not as severe as Alzheimer’s disease, who did physical activity combined with mental challenges showed a greater rise in BDNF than those who did physical exercise alone. The participants exercised while playing a video game that forced them to think.

If you play most sports, you have to think about and coordinate your movements. For example, a sport like volleyball or basketball requires agility, hand-eye coordination, and teamwork, and you have to strategize too.

But what if you don’t play sports? Are there ways to add more mental challenge to your workouts? For one, challenge yourself with new workouts. Don’t do the same routine over and over. Introduce new exercises and variations on the exercises you currently do. You should do that anyway to avoid reaching a plateau. Switch the order of the exercises you do, so you aren’t operating on auto-pilot and going through your workouts without thinking.

How about doing a math challenge each time you lift a weight? For example, start with a number like 3 on the first rep. When you do the second rep, multiply that number by itself. For the third rep, multiple the number again by 3. See how high you can go in your head. This exercise combines physical activity with mental activity.

If you run outdoors, change the scenery by running a different route. Traversing a new route forces your brain to work harder and it can help you stay motivated too!

Physical exercise is a boon for brain health, but a combination of physical and mental movement may have additional brain health benefits. Keep moving but try to add some mental challenges to your workouts by learning new exercises and mixing up your routine. If you play a sport, that helps too. Combine it with a brain-healthy diet that includes omega-3 rich fish and fruits and vegetables and you have a recipe for brain health. Much of how we age has to do with lifestyle. Take advantage of it!