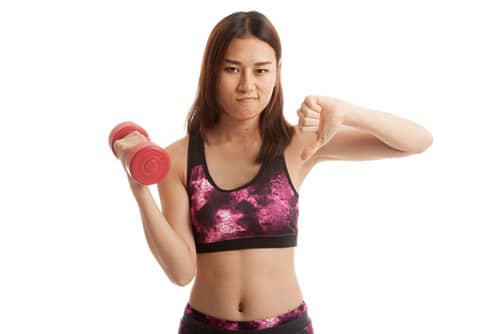 Why do some people seemingly enjoy exercise, or are at least motivated enough to do it, while others are almost exercise phobic?  Why do some guys and gals stick with their fitness routine for years while others abandon exercise to sit on the couch after only a month? After the  New Year is when people invest in new exercise clothes, make a down payment for a gym membership, and march to the exercise club to work out. Three weeks later, or at least by the end of February, the exercise clothes are tossed to the back of the closet and the exercise resolutions go by the wayside, at least until next year when they become part of a new resolution to “get fit.”

Fortunately, this scenario doesn’t happen to everyone, but the statistics are still bleak. According to a new study, 73% of well-intentioned folks who start an exercise program give it up. The reasons people give for abandoning their fitness goals include:

But what if you could look a little deeper at what’s going on in the brain of guys and gals who hate to exercise and those who can’t stick with an exercise program for more than a few weeks? What would you see? Scientists, too, have asked this question. Now, a new study published in the journal Cell Metabolism sheds light on this using a rodent model. What this study found were mice that overindulge food wise and don’t move around develop changes in receptors in their brain called D2 dopamine receptors.

You might recognize dopamine as the “reward” brain chemical When you stimulate dopamine receptors, for whatever reason, you feel a sense of pleasure and reward. That feeling is so satisfying that you want to recreate those feelings again and again. Not surprisingly, the stimulation of dopamine receptors is believed to play a role in food addiction. You feel rewarded when you eat fatty or sugary foods and want to keep eating them. Now, it appears, dopamine also influences how you feel about exercise and whether you’re motivated to do it.

Dopamine receptors are located in a portion of the brain called the striatum of the basal ganglia. It’s this area of the brain that’s damaged when people have Parkinson’s disease. The basal ganglia is involved in a variety of functions, including motor function, behaviors, and emotion and the striatum is strongly linked with reward. Based on research in mice, rodents that don’t like to exercise have D2 dopamine receptors that aren’t very sensitive. As a result, mice with these receptors don’t get the same sense of reward when these receptors are stimulated, including when they exercise. When they don’t get those “feel good” feelings that reinforce working out, they simply chill out rather than moving their bodies. Obviously, dopamine has more impact at some times than others since we all have days where we don’t want to move off the couch.

You might think this only applies to mice. However, preliminary research in humans shows it like also holds true for two-legged beings as well. According to MIT researchers, are involved in “cost-benefit analysis.” You probably know a bit about this already. You don’t feel like exercising on a given day but then you weigh the consequences of not doing so and realize you won’t feel your best and do it anyway. If you have D2 dopamine receptors that aren’t behaving properly, you might not be concerned about the cost of not exercising and decide to take it easy on the couch.

In some ways, dopamine is a brain chemical that encourages you to act rather than sit on the sidelines. Some people believe that sensitive dopamine receptors or too much dopamine motivates thrill seekers to engage in activities that are risky.

What Causes Dopamine Receptors to Be Harder to Stimulate?

Researchers believe “weak” dopamine receptors may be genetic. In fact, each of us inherits genes that determine how sensitive our dopamine receptors are. In some ways, the desire to be active is hard-wired into our brains. This could explain why a portion of the population is reluctant to exercise and can’t stick with an exercise program.

However, genes aren’t destiny. Research shows dopamine receptors are malleable and can change in shape and sensitivity in response to the environment. By pushing through a workout and making other positive changes to your lifestyle, you can “reboot” the insensitive dopamine receptors and make them more responsive. The key is to find an activity you enjoy and vary your workouts so you’re stimulated and challenged in different ways. Circuit workouts where the exercises change from minute to minute is a good option. Don’t let yourself get in a workout rut.

Another way to develop a positive mindset towards working out is to reward yourself when you work out rather than skip. Your brain sees that reward as pleasurable and may come to associate exercise with good things to follow. Just don’t make the reward unhealthy food or you’ll undo your hard work. Over time, if you’re consistent, the positive benefits of exercise, like having more energy & endorphin release, will become their own reward.

Just because you don’t have sensitive dopamine receptors and a natural love of exercise doesn’t mean you can’t stick with an exercise program. Judging by the failure of most people to stick to an exercise program, most of us aren’t wired to love to work out. Vary your workouts and reward yourself for completing each exercise session until it becomes an ingrained habit and you love the results so much that you can’t give it up.

Psychology Today. “Zero Motivation to Exercise? Dopamine Receptors Could Be Why”

Bodybuilding.com. “New Study Finds 73% of People Who Set Fitness Goals as New Year’s Resolutions Give Them Up”

Health Day. “Genes May Dictate Your Love or Hate of Exercise”

Are You Tough Enough? the Role Mindset and Mental Toughness Plays in Fitness Gains