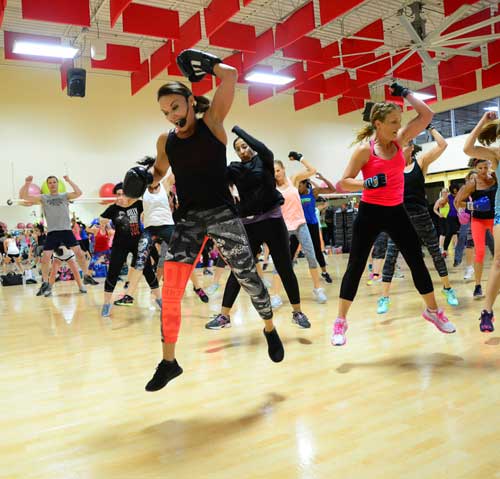 The average life expectancy for women is almost 79 years of age, a respectable length of time. But what fun would it be to live almost eight decades if you don’t have a healthy brain?  Unfortunately, brain function declines with age. In fact, you reach the peak of brain performance at around age 40. After that there’s a variable rate of decline, depending upon genetics and lifestyle.

What makes exercise such potent brain medicine? Physical activity stimulates neurogenesis, the creation of new nerve cells. This birth of new nerve cells takes places in a portion of your brain called the hippocampus, an area involved in cognition and the ability to remember what you learn. Exercise also enhances the way existing nerve cells, or neurons, connect with each other.

Researchers believe they know HOW exercise brings about neurogenesis. When you do an aerobic workout, muscle cells release a chemical called irisin. You might recognize irisin as the chemical that also activates brown fat, a type of fat that speeds up fat burning. In this case, irisin does something else beneficial. It boosts the release of another chemical called BDNF, or brain-derived neurotrophic factor. It’s BDNF that works magic on the circuitry in your brain.

Exercise boosts brain health in other ways too. Exercise enhances blood flow to the brain and encourages blood vessels to open up to deliver more oxygen and nutrients. A study showed 12 weeks of exercise increased blood volume to the brain and improved short-term memory. Other studies show exercise boosts working memory by as much as 50%. In addition, it improves episodic memory, the ability to spontaneously recall something from the past.

In addition, exercise has an anti-inflammatory effect. Inflammation is damaging to the brain and promotes insulin resistance, which further harms the health of your brain. So by subduing inflammation, exercise may help your brain in yet another way.

Just as exercise helps you retain muscle tissue, it does the same for your brain. Studies in which researchers scanned the brains of people who exercise show physical activity is linked with less loss of brain volume over time, especially in areas involved in thinking and memory. In fact, regular exercise appears to INCREASE brain volume in areas of the brain involved in cognition. Those are all good things when it comes to keeping your brain sharp later in life.

Use It or You Lose It

If there’s one downside to exercise for brain health, it’s that you can’t take a long break and sustain the benefits. How do we know this? A new study carried out at the University of Maryland supports this idea.  In this study, researchers asked 12 competitive runners between the age of 50 and 80 with a long history of running and racing to stop running for a while. These runners took their sport seriously, running 35 miles or more per week. Before stopping their running routine, researchers measured blood flow to their brain and asked them to take cognitive tests. After 10 days of doing no physical activity, they rescanned their brains and repeated the cognitive tests.

The results? What they found was blood flow to the hippocampus, the portion involved in cognition, was significantly reduced after taking a 10-day break from running. On the plus side, the participants still performed the same upon cognitive testing. Although it’s encouraging that cognitive function didn’t change, this was a short-term study and you wouldn’t necessarily see cognitive changes so quickly. Yet you lose the increased blood flow to the brain only 10 days after stopping an aerobic exercise program.

The increase in blood flow to the brain may explain some of the other benefits of exercise. For example, researchers from Stanford University found that when participants did low to moderate intensity aerobic exercise, they were able to think of more creative ways to use everyday objects. So, exercise may boost creativity as well. How many times have you been struggling with a problem and suddenly a solution comes to you during a workout?

Does Resistance Training Have Brain Health Benefits Too?

While more studies have looked at the effects of aerobic exercise on the brain, resistance training may offer brain health benefits too. In one study, researchers asked participants to take a brisk walk or weight train for an hour a day twice a week. The group who walked and the group the weight trained both experienced improvements in spatial memory, the ability to remember where things are in space. Plus, the participants who lifted weights also showed improvements in associative memory, the ability to identify two things that are related.

Resistance training may improve episodic memory as well. In one study, researchers showed healthy participants photos of objects before a workout. Afterward, one group did a warm-up followed by 6 sets of leg extensions while a second group didn’t exercise. After viewing the photos again 2 days later, the participants who weight trained were able to remember 10% more images compared to those who didn’t work out. It appears that both aerobic AND resistance training can enhance your memory.

Studies looking at exercise, memory, and brain health are encouraging but, as with most things related to health, consistency is important. You can’t take a month off and expect to retain the benefits. So, there’s fairly strong evidence that exercise is good for your brain but you need to make it part of your lifetime plan. Hopefully, you plan on doing just that.