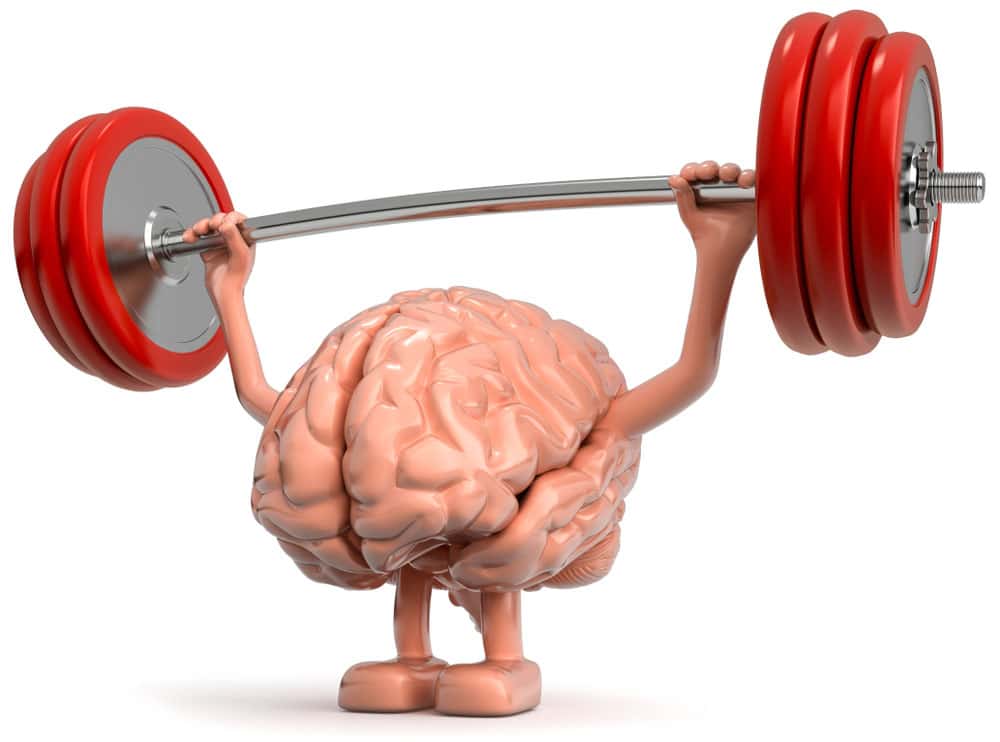 Strength training should be part of any fitness routine. Fortunately, more people are getting the message that building strength is as important as boosting their heart rate through aerobic exercise. You work your body with weights or against resistance to build strength and preserve bone mass. Of course, you want to be lean, tight, and strong too! Strength training can help you reach these goals too.

With so many other “perks” of weight training, you probably don’t think a lot about the brain benefits of working your muscles against resistance. That’s because aerobic exercise gets most of the attention in the media for brain health, for good reason! Studies suggest that aerobic exercise helps the brain form new nerve connections and even sprout new nerve cells. In response to aerobic exercise, your muscles release irisin, a signaling factor into the bloodstream. In turn, irisin boosts the release of brain-derived neurotrophic factor (BDNF) that helps the brain lay down new connections.

There’s less evidence that working your muscles against resistance boosts the release of BDNF. However, research also suggests that strength training may be an ally in the fight against dementia and age-related cognitive impairment too. What can strength training do for your brain and can it help you stave off cognitive decline as you age?

Although fascinating, the earliest research looking at the brain benefits of resistance training was carried out on rodents. Although these studies were encouraging, it wasn’t clear whether they can be extrapolated to humans.  At least in rats, strength training has some of the same benefits as aerobic training on the brain. It helps build new nerve cell connections. It’s not clear whether this happens in humans.

Is There Evidence that Strength Training Boosts Brain Health in Humans Too?

Studies focusing on the impact of strength training on the brain in humans are more limited. One encouraging one was conducted on healthy men and women between the ages of 55 and 86. The participants had a condition called mild cognitive impairment where their memory and cognitive ability were mildly impaired but not to the degree that people with dementia experience. However, people with mild cognitive impairment are more likely than the average person to develop dementia later on.

For the study, researchers divided the participants into two groups. One group strength trained twice weekly using a resistance of 80% of their one-rep max. The control group did only stretching exercises. Before and after their respective routines, the subjects underwent cognitive testing. After 12 months, the researchers brought the subjects back to repeat the cognitive testing a final time.

In another study, researchers designed a clever, randomized, double-blind, controlled study to look at the effects of resistance exercises on brain function in older adults. The strength of this study is that it was double-blind, controlled, and randomized, the highest quality type of study that carries the most credibility. Plus, the size is somewhat larger and focused on 100 participants, age 55 and over, with mild cognitive impairment.

What’s interesting is the improvements in cognitive function correlated with the increase in strength rather than the gains in aerobic capacity that participants made. Could some of the cognitive benefits we get from aerobic training come from the strength gains that go along with it? Resistance training and the increases in muscle mass that goes along with it boosts insulin sensitivity and helps with blood glucose control. That’s important since people with high blood sugar are at greater risk of developing cognitive impairment.

Independently of its impact on cognition, strength training helps prevent sarcopenia, the age-related loss of muscle and fat gains that contributes to health problems such as insulin resistance, frailty, and falls. The biggest reason older people become frail and injury-prone is because they lose too much muscle and bone mass due to inactivity.

The evidence that resistance training boosts brain function or wards off dementia isn’t as solid as the research supporting aerobic exercise for brain health, but preliminary results in humans are encouraging. That’s why it’s important to do both forms of exercise! There are several ways in general that exercise may improve brain health and ward off cognitive decline. Aerobic exercise may be best for creating new nerve cells and nerve connections, but strength training improves insulin sensitivity and body composition and that’s important for blood sugar control. Exercise, in moderation, also has an anti-inflammatory effect on the body that’s also good for brain health. So, by now you probably know the take-home message. Do both!