Are Air Fryers a Healthy Way to Cook Food?

Are Air Fryers a Healthy Way to Cook Food? 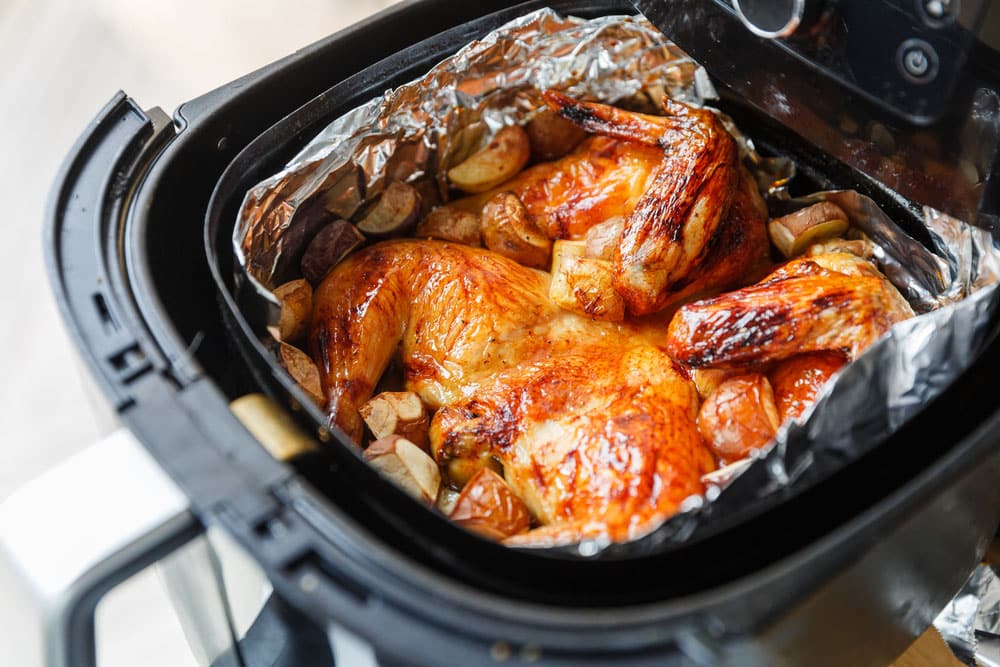 Air fryers have become one of the hottest cooking appliances to debut in the market in recent years. Advertisements claim they’re a healthy alternative to deep-frying foods and they’re easy to use. In fact, air fryers heat food with hot air instead of oil or grease - which makes clean-up easier. No greasy stovetop or kitchen counters! But is the food that comes out of an air fryer as healthy as sources claim?

Air Fryers Allow You to Cook Without Oil

The biggest benefit of air fryers is that you can get the texture of fried food using only a small quantity of oil, around a tablespoon. Instead of submerging your food in a pool of hot oil, air fryers use super-heated air to cook your food. The heat produced by the heating elements evaporates from the food’s surface. This creates steam that browns the surface of your food and gives it a crispy texture reminiscent of fried food. You get the taste of fried without the grease or oil used in traditional pan-frying methods.

This method creates crispy textures while keeping the calorie and fat content low. An air fryer is like a small convection oven that circulates hot air in a chamber around the food. The hot air cooks the food and gives it a crispy skin, like deep frying.

So, if you’re trying to cut down on fat in your diet or just want something healthier than frying foods in oil (which adds more calories), an air fryer will help you achieve that goal. Cooking in an air fryer cuts the fat and calorie content of food by 75%. It also gives your food a crispy crust and delicious flavor - which is why people are buying air fryers in record numbers.

From a calorie and fat standpoint, air fryers offer an advantage over deep frying. Since air fryers use dry heat to cook food, they may lead to less nutrient loss than deep frying. But there are other issues to consider. Let’s look at some of those.

Why is acrylamide a concern? The EPA also classifies acrylamide as “likely to be carcinogenic to humans.” However, at this time, there isn’t enough evidence to say whether eating foods cooked in an air fryer increases cancer risk. Animals exposed to acrylamides develop cancer at higher rates, but the amount of exposure is higher than what humans get from eating fried food.

One study found that air frying sardine fillets increased oxidized cholesterol and reduced the quantity of polyunsaturated fats in the fish. That would include omega-3s, an anti-inflammatory type of fat in fatty fish. Such changes would not be favorable for heart health. The study also found that adding antioxidant-rich fresh herbs may reduce this negative consequence of air frying.

If the food you’re cooking in an air fryer doesn’t reach a temperature high enough to kill bacteria, you run the risk of food poisoning. Like your oven, preheat your air fryer before using it to ensure it’s hot enough. Be sure to clean your air fryer after each use, especially if you cook chicken.

Another problem with air fryers is the type of food people cook in them Some of the most popular air-fried foods include chicken wings, fries, tacos, and fried chicken. And there are some limitations. Items with a lot of sauce or oil are difficult to cook properly in an air fryer. For example, if your chicken wings are covered in barbecue sauce or garlic butter, the sauce will drip onto the heating element or burn on the outside before they’re cooked all the way through.

If having an air fryer causes you to eat more fries and chicken wings, it may not be a good addition to your kitchen. However, you can cook healthier fare in an air fryer, including vegetables.

Air fryers use less oil than deep frying, so they don’t have the same caloric or fat load as a deep-fried food. Still, there are concerns about the acrylamides that air frying produces. If you’re using an air fryer to make veggies taste better, so you’ll eat more of them, that’s a benefit. But if you fire up French fries every night in your air fryer, you might be better off without it.

An air fryer is healthier than deep-frying, but you should still eat fried foods in moderation. If you only use an air fryer once or twice a month, that’s better for your health than eating fried food every day.

Is Fast Food a Bad Habit or An Addiction?