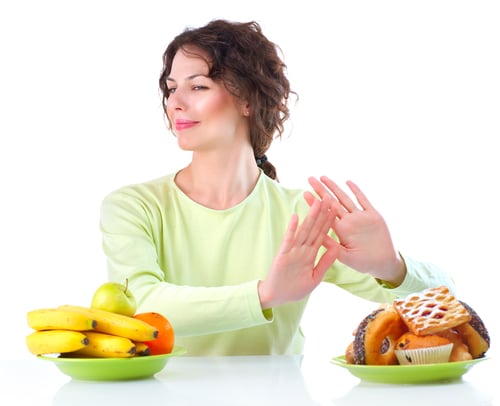 Wouldn’t it be nice if you craved broccoli and spinach instead of ice cream and French fries? That would certainly make it easier to eat a healthy diet and control your weight. Fast food restaurants are built around the idea that people can’t pass up food that’s high in sugar and fat even if it does bad things for their health. Ideally, you’d be able to program food preferences into you’d brain like you program a computer so you would no longer crave high-calorie foods that have little nutritional value. That’s not possible but there ARE ways to tame those cravings for the wrong foods and enjoy eating healthier fare.

Why is unhealthy food appealing to so many people? At least in mice, foods high in fat have addictive potential. When mice are raised on a diet loaded with fat and then switched to leaner fare, they become anxious or depressed. One theory is that high-fat diets cause changes in brain chemicals like dopamine that are linked with pleasure and reward.

Other research in animals shows sugar stimulates brain receptors for brain chemicals like dopamine and opioids. Some experts believe that sugar has an effect on the brain similar to heroin and other addictive drugs. Rats even show signs of withdrawal when they’re deprived of sugar. Whether this is true in humans isn’t clear but there’s little doubt that some people seek a sugar or fat “fix,” judging by the lines at fast food restaurants and ice cream parlors.

Can You Retrain Your Brain to Crave Healthy Foods?

If you’re accustomed to eating a diet high in sugar or fat and decide to suddenly eliminate all added sugar or drastically limit the amount of fat in your diet, you’re unlikely to be successful. Your taste buds have become sensitized to sweetness, and the texture of fat and food will taste completely different. The key? Cut back in increments, gradually replacing foods high in sugar and fat with healthier alternatives like whole foods with no added sugar or creamy sauces.

If you’re a fast food junkie, start by ordering a salad to accompany a fast food sandwich instead of fries. This works better than going “cold turkey” and giving up fast food entirely. If you put 3 teaspoons of sugar in your coffee, cut the amount in half gradually over several weeks and then cut it in half again. Gradually taper back to give your taste buds a chance to become sensitive against sweetness. Once you’re down to a teaspoon, 3 teaspoons of sugar will taste overwhelmingly sweet and foods that are low in sugar will again have flavor.

While you’re cutting back on sugar, gradually introduce healthier foods into your diet. Add one extra vegetable to your plate every week or two. Roast your vegetables or add seasonings to bring out their flavor. Eat slowly and concentrate on the taste of each bite. Gradually, you’ll develop an appreciation for foods that aren’t loaded with sugar and fat. It’s all about eating slowly and mindfully.

What about using calorie-free sweeteners to cut back on sugar? To retrain your taste buds and reduce the desire for foods high in sugar, you’ll need to cut back on ALL sweeteners. When your taste buds sense sweetness, it creates a flavor preference. Instead, expose your taste buds to whole foods so you learn to appreciate foods in their natural state. After you’ve done this for several weeks, you’ll find sugary and fatty foods will have far less appeal.

Another way to reinforce the desire to eat healthy is to create a pleasant atmosphere when you eat a healthy meal. Arrange your food in an appealing fashion on the plate. If you’re eating alone, play some relaxing music in the background so your brain associates healthy eating with pleasure.

You can retrain your taste buds to appreciate the taste of whole, healthy foods but it takes time. It’ll be less of a shock if you do it gradually – but be persistent. Stick with it and fast food and processed food will lose their appeal.

Smart Snacks That Will Fool Your Taste Buds