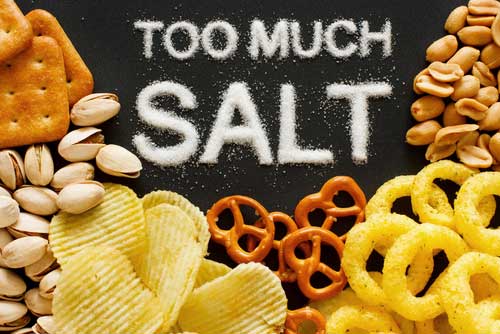 Visit the snack aisle of any supermarket and you’ll see a dizzying array of salty foods. Chips, jerky snacks, and even healthier options like nuts are all high in sodium. Ever noticed how easy it is to keep munching on these foods? It’s not your imagination. A new study now shows foods high in salt may stimulate your desire to eat more. Now you know why it’s so easy to knock off a bag of potato chips – and wonder why you did later.

What does science say? In a recent study, Australian researchers gave a group of 48 young and middle-aged individuals, some with a normal BMI and others who were overweight or obese, one of four variations of a meal consisting of pasta and sauce. Each meal had varying levels of salt and fat. The variations were:

The participants were instructed to eat as much of the pasta meal as they needed to feel full. Afterward, the researchers questioned them about how full and satisfied they felt and how pleasant they found the meal to be. Behind the scenes, the researchers also recorded how much they ate and how fast they ate it.

What they found was participants ate more of the meals high in salt and perceived them to be more appetizing and satisfying. In fact, the addition of more salt increased calorie consumption by 11%, independent of the amount of fat in the meal.

Certain people are more sensitive to the taste and texture of fat than others and those that are “fat sensitive” tend to consume less when they eat a meal high in fat. They simply don’t enjoy fatty foods. Yet, in this study, the addition of salt to a meal overcame the desire not to eat fat and even fat-sensitive individuals ate more fatty food when it contained more salt. According to this study, the addition of salt makes fatty foods more palatable even when participants don’t like foods high in fat.

That salty foods promote overeating isn’t earth-shattering. Food would taste bland without sodium and we tend to eat less of bland, flavorless food. Plus, there’s a reason food manufacturers add tons of sodium to their offerings. They want you to love it and buy more! Have you ever munched on a salt-free potato chip? It tastes like cardboard rather than a snack.

According to Dr. David Kessler, physician, medical school dean, former commissioner of the Food and Drug Administration, and author of the End of Overeating, it’s not just salty foods that stimulate overeating but sugar and fat as well. According to Dr. Kessler, foods with a combination of salt and fat and those with added sugar alter brain chemistry in a way that makes it easier to overeat. These are the combinations you find most in processed and packaged foods – and it’s not by accident. Manufacturers make money when you eat more of their products.

Your brain runs on brain chemicals called neurotransmitters. These brain messengers influence a variety of bodily functions, including movements, mood, and how much you eat. One such brain chemical called dopamine is the “reward” chemical because your brain releases more of it when you do something pleasurable, like munch on a food high in sugar, salt, and fat.

According to Dr. David Kessler, your brain actually releases opioids after eating highly palatable foods and these chemicals have a calming, almost Zen-like effect. Of course, your brain wants to reproduce those good feelings. As a result, your urge to eat more of these foods grows. It’s not hard to see how you would eat more of foods that induce favorable changes in brain chemistry and such a pattern could lead to a form of food addiction.

At least in lab rats, the evidence for food addiction is strong. Rats that can eat all they want of foods high in fat and carbohydrates will eat themselves literally to death and endure pain to gain access to the fatty, carby foods they crave. Lab rats, under such circumstances, even exhibit signs of withdrawal when these foods are withheld from them.

What do withdrawal signs look like in a rat? The animals become nervous, anxious, and restless. In addition, research from the University of Florida shows foods high in sugar and fat change dopamine receptors in the brain in the same way alcohol does.

Then there’s the issue of tolerance. When you constantly eat foods high in salt, sugar, and fat, the receptors in your brain become tolerant of the constant bombardment with brain chemical altering components like sugar and fat. In turn, you need to eat even more of these foods to get the same feelings of contentment and pleasure.

You might wonder why humans crave junk food rather than the “good stuff.” Experts believe it has to do with survival. Before food was abundant, it was in your best interest to eat calorie-dense foods as a source of sustained energy. Obesity wasn’t a concern back then and humans didn’t spend 8 hours sitting at a desk. They were constantly on the move. What was an adaptive behavior then no longer works in our favor and the obesity rate reflects this.

Salty foods, sugar, and fat – the holy trinity of processed foods are damaging to your body in more ways than one. As this study shows, adding salt to foods makes fatty foods more appealing, and sugar, in and of itself has addictive properties. Both can cause you to overeat while sugar can damage your metabolic health.

As you can see, it’s important to stick with whole foods that don’t overstimulate the dopamine receptors in the brain and lead to cravings and the need for more. Just as an alcoholic must abstain from alcohol, food addiction requires abstinence for dopamine receptors to regain their sensitivity and the cravings to lessen.

IDEA Health and Fitness Association. “Food and Addiction: The Dopamine Made Me Do It”