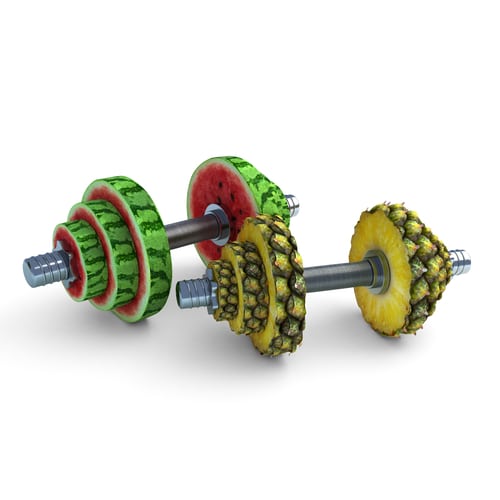 Are you skimping on your post-workout nutrition or not fueling up quickly enough after a workout? It’s important to not only replace the fluids you’ve lost during exercise but the carbohydrates you’ve used to fuel your workout. Carbohydrates are stored as glycogen inside muscle cells, and if you’ve just finished a long or intense workout those stores are depleted. If you don’t replace lost carbs, it’ll be tough to do another workout later in the day if you exercise twice a day.

The Importance of Replacing Carb Stores Quickly After a Workout

Eating a carb meal right away is most important for people who work out more than once a day. If you exercise in the morning and do another workout when you get home from work, you need to deliver carbs to your muscles as quickly as possible after your morning workout since it takes time to replace glycogen stores. There seems to be a window period after exercise where your body is primed to absorb carbs and use them to replenish lost glycogen.

Post-Workout Nutrition: How Much Carbohydrate Do You Need After a Workout?

As a general rule, you should get about a half-gram of carbohydrates per pound of body weight after a workout. This means a person who weighs 150 pounds needs around 75 grams of carbs during the post-workout period. Some athletes avoid high-glycemic carbohydrates because of the effect it has on insulin levels and fat storage, but you’ll replace glycogen stores more rapidly if you choose carbs that are moderate to high on the glycemic scale. It’s the one time of day, you don’t have to feel guilty about choosing carbs that are absorbed more quickly like pasta and breakfast cereals. Combine them with protein to help with muscle repair and recovery. Good examples of snacks to eat after an endurance workout? A serving of spaghetti, oatmeal with fruit and an egg, chicken, and rice, or a peanut butter and jelly sandwich are all good choices.

When You Don’t Need High-Glycemic Carbs after a Workout

If you just finished a lower intensity exercise like walking for 45 minutes or less, you don’t need to load up with high-glycemic carbs when you get home. Lower intensity exercise of relatively short duration doesn’t deplete glycogen stores to the same degree since your body burns a greater proportion of fats with less intense exercise.

If you’re walking to try to lose weight, eating high-glycemic carbs after a workout will work against you by spiking insulin levels, which can contribute to fat storage. You’re better off eating a snack that contains a modest amount of protein and fiber-rich carbohydrates that are low on the glycemic scale. A spinach salad with grilled chicken or a half of a turkey sandwich on whole grain bread is a good post-workout meal or snack.

After an intense workout, eat a carb meal as quickly as possible to start replenishing muscle glycogen stores. This is especially important if you exercise more than once a day. If you wait an hour or two after your workout, you’ll delay this process and make it harder to exercise later in the day. If you work out at a higher intensity, choose a carb snack that’s higher on the glycemic scale and combine it with a source of protein. If you do a shorter workout that’s lower in intensity like brisk walking, stick with fiber-rich low-glycemic carbs for your post-workout snack.

Fruit Juice, Smoothies, and Whole Fruit: Is One More Nutritious Than the Other?