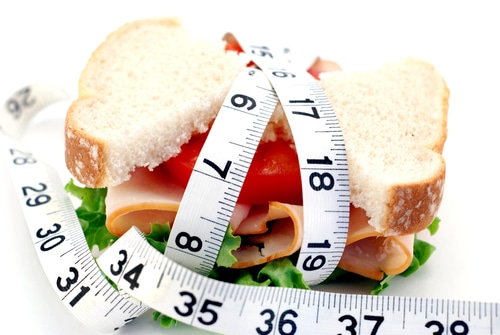 In a world where low-carb diets such as Atkins and the Dukan rule, carbs may seem to some to have been relegated to the list of foods to avoid. This is bad for two reasons. You need a certain amount of carbs in your diet for fuel, especially if you work out intensely. Secondly, an extremely low-carbohydrate diet is difficult to sustain long-term.

The problem with eating high-carbohydrate foods is they cause insulin levels to spike. Insulin is a hormone that not only moves glucose into cells but promotes fat storage as well. The insulin spike that occurs after eating a high-carbohydrate food is the body’s signal to store more fat. Not a good thing if you’re trying to maintain your weight or lose a few pounds. Fortunately, there are ways to eat carbohydrates that will have less impact on insulin levels and fat storage.

When you eat carbs, combine them with a protein source. According to Dr. Cheryle Hart, author of the book The Insulin Resistance Diet, protein doesn’t cause the same spike in insulin levels as carbohydrates do. She suggests combining carbohydrates with a protein source to reduce the rise in insulin that occurs after eating a carb-rich snack. For example, when you eat potatoes, have them with a source of lean protein like turkey or lean fish. The idea is to balance the insulin-boosting effect of the potatoes with a protein.

Not all carbohydrates have the same effect on insulin levels. Fiber helps to reduce how rapidly carbohydrates are absorbed. This lowers the insulin response. When you eat a piece of white bread, you’ll get greater insulin release than when you eat a piece of whole-grain bread that’s rich in fiber. Fruits and vegetables are carbohydrates, but they don’t cause the same insulin response, because they also contain fiber. Focus your carbs around fiber-rich carbohydrates like vegetables, and eat moderate amounts of fruits and whole grains. Eliminate processed carbs that have had most of their fiber removed from your diet as much as possible. They’ll do nothing good for your waistline or your health.

You should probably limit rapidly absorbed carbs that lack fiber. The exception is after you’ve completed an intense workout. After a hard workout, your glycogen stores are depleted, and you need carbohydrates to replace them. Many bodybuilders combine simple carbohydrates that boost insulin levels with protein after a strength training session. The simple carbs stimulate insulin release, which helps amino acids from the protein enter muscle cells where they can be used to build lean body mass. A bowl of oatmeal and two eggs or an order of lean, turkey sausage is a breakfast meal that would rapidly replenish glycogen stores and help muscle cells get access to the protein they need after a morning workout.

You need carbs if you work out. The key is to know when and how to eat them. Carbohydrates are an important part of a healthy diet. Don’t ignore them.

Calorie Quality: Why It’s Important and How to Improve It