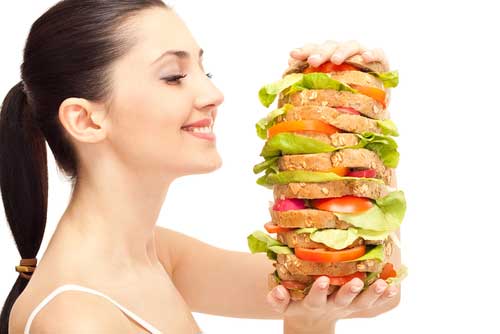 Hunger is a powerful motivator. When the hunger wave hits, it sends you scurrying to the refrigerator to eat the wrong things. The desire to eat is controlled by your brain and the interplay of a variety of hormones including leptin, ghrelin, insulin, and hormones produced by your gut. As always, your brain and gut hormones have your best interests in mind. They’re working together to keep you well fueled.

Uncontrolled hunger is one of the primary reasons people fail at losing weight. Hunger can rage out of control when you reduce your food intake too much and your body senses starvation. Hunger is also impacted by the composition of your diet. If you feel hungry all the time, it may be related to the food choices you’re making.

Hungry All The Time? The Role Carbs Play in Out-of-Control Hunger

If you’re feeling hungry throughout the day, take a look at how much you’re eating AND the types of foods you’re chowing down on. A diet high in low-fiber carbohydrates, particularly processed carbs, may be at the root of the problem. Simply put, high-glycemic carbohydrates won’t fill you up as well and won’t keep you full for longer.

In one study, researchers gave obese young men one of two milkshakes to drink. Both milkshakes had the same amount of fat and protein and a similar number of carbs, around 70 grams. There was one difference. The carbohydrates in the first milkshake were high-glycemic carbs that cause a rapid rise in blood sugar. The second milkshake was made with low-glycemic carbs.

When the men drank high-glycemic shakes, their hunger was satisfied – but only briefly. Their hunger returned quickly. Over the next five hours, they consistently felt hungry. Not so when they drank a low-glycemic shake. The men stayed satiated and satisfied. When researchers visualized the men’s brains using brain imaging studies, they found portions of the brain involved in reward were activated after the high-glycemic shake. The take-home message? Choose your carbs wisely and make sure they’re low-glycemic ones.

You need carbs, especially if you do high-intensity workouts but not all carbohydrates are created equal. High-glycemic carbs are carbohydrates that rapidly raise and then drop your blood sugar. Examples are white bread, white rice, white potatoes, and sugary foods. Low-glycemic carbohydrates are those that elicit a slow increase in blood sugar. Examples are fiber-rich vegetables, whole grains, and some fruits. Guess which ones you want to avoid if you’re trying to control hunger? The high-glycemic ones, of course, because they drop your blood sugar quickly.

You don’t have to know a carbohydrate’s glycemic index to determine whether it’s a carb that won’t keep you satisfied. If you stick with fiber-rich, unprocessed carb sources and avoid processed carbs and foods low in fiber, you’ll hit the mark most of the time.

Protein and Carbs – A Good Combo

What you eat with carbs also impacts blood sugar response and whether you feel full. Eating carbohydrates with protein or a little fat slows down digestion, so the carbs are absorbed more slowly. This gives you a slower rise in blood sugar and keeps you full longer. Protein is the most satiating of all the macronutrients. Not only does it keep hunger in check the best, but your body also has to expend more energy to break it down. That’s why higher protein diets are more effective for weight loss.

In general, research shows foods higher in protein, fiber and water are the most satiating and keep hunger in check the longest. Think fiber and water-rich veggies, healthy soups and salads with protein. Good thing to remember when planning your meals!

Distinguishing Between Hunger and Appetite

It’s not necessarily hunger that drives you to the refrigerator. Hunger is a physical reaction, often driven by a decline in blood sugar. That’s why high-glycemic carbs that drop your blood sugar more quickly motivate you to eat more. Appetite is a psychological desire to eat, not necessarily motivated by hunger.

How many times have you been full at the end of a meal only to have your appetite perk up when you see the dessert tray? That’s not true hunger. It’s the desire to enjoy something that tastes good. Not distinguishing between the two can cause you to overeat. Eating when you’re bored or stressed out, in the absence of true hunger, is another bad habit that can lead to weight gain.

If you’re hungry all the time, you’re probably not eating enough total calories or protein or you’re snacking on the wrong types of carbohydrates. Choose high fiber carbohydrates and eat them with a source of protein to keep your blood sugar stable and hunger at bay.

Just as importantly, don’t cut back on calories to the point you’re hungry all the time. Appetite hormones are a powerful motivator and it’s hard to resist their pull. Make sure you’re giving your body the energy source and nutrients it needs in a form that won’t leave you feeling hungry an hour or two later.

Good Carbs vs. Bad Carbs: Do You Know the Difference?