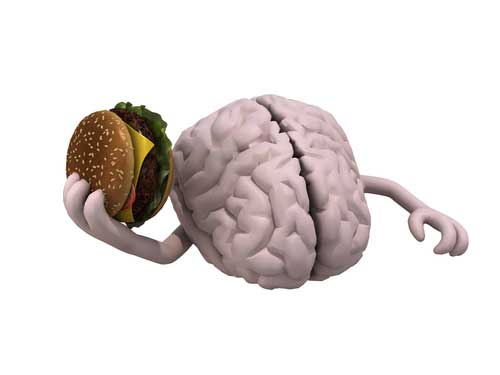 Since leptin turns off appetite, it might be more appropriate to call it a satiety hormone. Up until now, scientists haven’t known exactly HOW leptin acts in the brain, only that it acts on receptors on a portion of the brain called the hypothalamus. Now, the exact brain cells that control appetite, through the activity of leptin, have been identified.

Leptin is a hormone produced by fat cells. Its main job is to regulate your body’s energy balance, both how much you eat and how much energy you expend. When you’re in an energy-rich state and have enough stored fat, your fat cells produce more leptin. This leptin travels to your brain, sending the signal to shut down your appetite and increase your metabolism.

In an energy-depleted state, fat cells, being deflated due to lack of stored fat, produce less leptin. Therefore, less leptin reaches your brain to scale back your appetite and speed up your metabolism. As a result, your hunger level climbs and your metabolism slows.

It’s an elegant system but one that can get out of whack. We know that people who are obese often have high levels of leptin. Yes, it sounds paradoxical. After all, they have plenty of stored fat – so why are fat cells pumping out leptin in an energy-rich state? The problem lies with the receptors that sense leptin.

When an obese person, or anyone else, has a high level of circulating leptin, their receptors are bombarded with leptin. In response, leptin receptors in the brain “downregulate” and become less responsive to it in a similar manner to which insulin resistance occurs. There’s plenty of leptin around but the brain isn’t getting the message because the receptors are desensitized. It’s as if the receptors can no longer sense the presence of leptin. This is called leptin resistance and is an underlying factor in many cases of obesity. Believe it or not, this knowledge is relatively new. Scientists only discovered leptin 20 years ago and it’s changed the way we look at obesity.

A New Discovery about Leptin

Slowly, researchers are gaining new insights about appetite regulation. In a recent study, scientists identified a group of brain cells called NG2-glial cells. These cells are clustered around a portion of the brain called the median eminence located in the hypothalamus, a very busy portion of your brain. Some of the hypothalamus’s many jobs are to control body temperature and regulate the release of hormones, including hormones that affect metabolism and appetite. What they found was when NG2-glial cells are absent, leptin can’t bind to leptin receptors and the brain has no way of knowing fat stores and energy needs are being met.

In mice, when researchers used a drug to destroy the NG2-glial cells, the mice began to eat voraciously and, over a 30-day period, some of the rodents actually doubled their body weight! With the NG2-glia cells out of the picture, leptin couldn’t communicate with the brain as easily. This finding further confirms the role leptin plays in appetite control. When leptin can’t bind to leptin receptors and convey its message, it leads to overwhelming hunger and weight gain.

The Role of Leptin in Health

It’s not hard to see the role leptin plays in obesity. Leptin resistance is a growing problem – but there’s evidence that high leptin levels, due to leptin resistance, may play a role in other health problems as well, independent of obesity.

For example, research shows circulating leptin in the bloodstream is linked with inflammation and blood vessel damage. In turn, these factors may contribute to other health problems, like coronary artery disease, high blood pressure, and type 2 diabetes. Both leptin and insulin resistance seem to contribute to the higher rate of hypertension in people who are obese.

As you can see, leptin resistance and high levels of leptin may be a factor in other chronic health conditions. Are the newly discovered NG2-glial cells a major contributor to leptin resistance? More research is needed but it’s an intriguing question.

Leptin Isn’t the Only Appetite Hormone

Leptin doesn’t act alone to control your appetite. In fact, there are at least 11 other hormones and brain chemicals that help regulate your desire to eat. Some of these chemicals are produced by the small intestinal tract while others, like ghrelin, are manufactured in the brain or by the lining of the stomach. Ghrelin is the most powerful of the hunger-stimulating hormones while leptin is the reigning satiety hormone. Your stomach lining produces ghrelin when you haven’t eaten in a while and makes more when you’re sleep deprived or not consuming enough calories.

As you can see, appetite control is multi-faceted and, as you know, we don’t always just eat when we’re hungry. Emotional eating, munching out of boredom, and distracted eating is common and also contribute to weight gain. So, appetite and satiety hormones aren’t the entire story.

Obviously, there more to learn about appetite hormones, but scientists now have a better idea of how leptin works and you do too! It’s one of the many hormones that can impact your appetite, body weight, and your health.

Can Exercise Help You Avoid Overeating?

The Metabolic Effects of Snacking