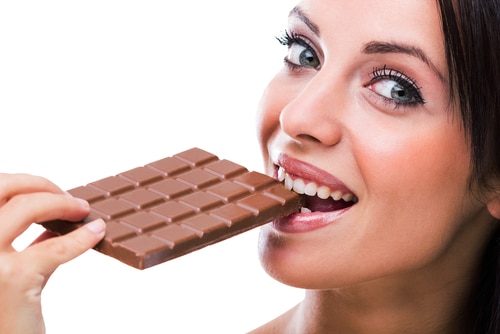 What Happens When You Eat a Cheat Meal?

If you’re consistently eating low-calorie meals, your body has likely adapted to the number of calories you’re eating. When you suddenly challenge your body with a few high-calorie, high carbohydrate meals, your leptin level rises. Leptin is a hormone produced by fat cells and responsible for regulating your appetite and energy intake. It’s not the only one but it’s a major player. Leptin interacts with receptors in your brain that turn off your appetite so your hunger is appeased. Leptin also plays a role in energy metabolism. When you restrict calories and your leptin levels fall, your metabolism slows as well. The amount of active thyroid hormone in your bloodstream drop as well. This is your body’s attempt to conserve energy during periods of calorie restriction.

Calorie restriction isn’t the only thing that causes leptin levels to fall. Leptin is also regulated by the amount of body fat you have. If your body fat stores fall due to weight loss, less leptin is produced and your metabolism slows. This makes it so easy to regain the weight you’ve lost. It also wreaks havoc with your appetite. As a result, you end up eating more and snacking more as leptin levels fall. It’s your body’s attempt to restore your dwindling fat stores. So, a combination of calorie restriction combined with dwindling body fat stores can cause a sharp drop in leptin.

So what happens when you “shake things up” with a few meals that are significantly higher in calories than what you’ve been eating? Your leptin level rises. This jump in leptin is beneficial for two reasons. It reduces your appetite AND speeds up your metabolism so your body is a more effective fat-burning machine, at least temporarily. To get the benefits, these cheat meals should be high in carbs. Carbs stimulate insulin production and insulin, in turn, boosts leptin.

A Cheat Meal or a Cheat Day?

Eating a cheat meal to increase leptin and jumpstart your metabolism sounds like a no-brainer. There’s only one problem. A single cheat meal may not be enough to significantly raise your leptin level. You may need to increase your carbohydrate and calorie intake for a full 24 hours – a cheat day to get the benefits.

Is There a Better Approach?

Obviously, you don’t want your leptin levels to drop when you’re trying to lose weight since it slows your metabolism and makes you feel constantly hungry. One approach is to only modestly reduce your calorie consumption. Then focus on creating an energy deficit through exercise. Another is to alternate low-calorie, low-carb days with days that are higher in calories and carbs to boost your leptin level and help you avoid a metabolic slowdown. What you don’t want to do is restrict calories and carbs consistently so that your leptin levels dive and you have problems controlling hunger.

If you choose to “cheat” on a weekly basis, a cheat meal may be psychologically satisfying, but it may not bring the desired physiological benefits (an increase in metabolism) that a cheat day will. It may take more than a single meal to jumpstart leptin production. Increasing calories by around 30% and doubling your carb intake for a full day should be enough to boost your leptin level if you’ve been following a low-calorie diet.

The Problem of Leptin Resistance

Some overweight people who have difficulty losing weight are leptin resistant. Leptin resistance is where your body becomes unresponsive to the leptin you produce. You may have lots of circulating leptin but it’s not doing its job of turning off your appetite. Some research suggests that leptin resistance comes from the inability of leptin to cross the blood-brain barrier to reach the brain where it can interact with brain leptin receptors. Triglycerides appear to block leptin transport into the brain. Triglyceride levels go up with both obesity and starvation. Both of these extremes may contribute to leptin resistance.

There’s also some evidence that the sugar fructose contributes to leptin resistance. In a study published in the Journal of the American Medical Association, researchers gave participants a drink that contained either fructose or glucose and measured their brain activity using an imaging study. The participants that drank the glucose drink showed increased brain activity in portions of the brain involved with reward and appetite suppression. Those that drank the fructose drink didn’t. This supports other research showing that fructose may behave differently than glucose in your body and may not be as effective at turning off appetite as glucose. It’s one more reason to limit the amount of fructose in your diet. The worst culprit? Foods at your local supermarket that contain high-fructose corn syrup. One way fructose may increase leptin resistance is by elevating blood triglycerides.

Leptin is a critical hormone involved in appetite control and energy balance. When leptin levels drop due to calorie and carbohydrate restriction, it’s more difficult to control your appetite. In addition, your metabolism slows. A period of “refeeding” where you eat more calories and carbs than your body is accustomed to can help boost your leptin level.

Winter Weight Gain: Why You Eat More in the Winter and How to Avoid It

Calorie Cycling: Should You Change the Number of Calories You Consume on a Daily Basis?

What Is Hunger and How Can You Control It?