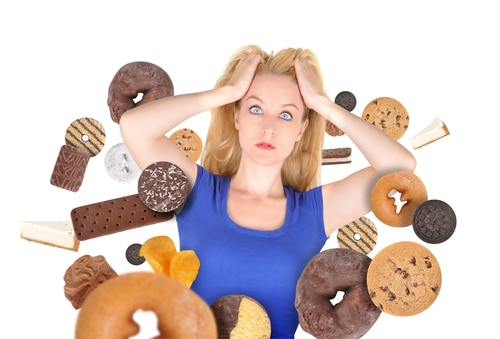 Hunger is a powerful motivator – one that can send you running to the closest snack machine for empty-calorie munchies. Willpower can help you control the impulse to eat something you know you shouldn’t, but wrestling the hunger monster is not something you want to do all the time. It’s better to control hunger in the first place. Fortunately, there are ways to get a better grip on your appetite.

Your body has mechanisms in place to ensure it gets the nutrients and energy it needs for survival. It’s called hunger. The exact sequence of events that triggers hunger isn’t completely understood, but it involves the interplay of hormones like leptin and ghrelin that signal the brain when you’re low on energy or in a well-fed state.

Leptin is produced by fat cells and is released in higher concentration after a meal to signal a high-energy state. After you haven’t eaten for several hours, leptin levels start to drop, and the “hunger hormone” or ghrelin, produced by cells in the lining of your stomach, kicks in, creating hunger pangs and the desire to munch.

Of course, it’s never quite that simple. Other hormones like cortisol, insulin, peptides released from intestinal cells and recently discovered neuropeptides called orexins affect leptin and ghrelin levels or impact hunger by their effects on the brain. Dieting affects levels of hormones like leptin too, causing leptin levels to drop so hunger kicks in.

Lack of sleep has an impact too. Skimping on sleep increases ghrelin and decreases leptin levels, all of which increase hunger. Based on this, two ways to control hunger are to not restrict calories too much by “dieting” and to make sure you’re sleeping a minimum of 7 to 8 hours a night.

Other Ways to Control Hunger

There are other simple steps you can take to better control hunger so you’re not constantly wrestling with your appetite hormones. Here are some tips:

Eat more high-volume foods. High-volume foods are those with a greater water content – think soup, fruits, and veggies. The high water content of these foods adds bulk and increases satiety. Foods high in fiber also add bulk because they expand and form a gelatinous-like substance in your digestive tract. Many experts recommend starting a meal with a high-volume food like a bowl of soup to increase satiety and reduce how many calories you eat for the rest of the meal. That’s good advice.

Begin the day with breakfast – and a high-protein one at that. When you eat protein, it increases the release of a peptide called peptide YY that suppresses appetite. Start the day with 30 grams of high-quality protein. Eggs are a good choice and one of the more satiating foods you can eat. Then eat some form of lean protein at every meal to help control hunger.

Dividing your calorie intake into smaller, more frequent meals may help reign in hunger too. Although research doesn’t always support the idea that eating more frequent meals helps with weight loss, there’s some evidence that it controls hunger. The key is to keep your calorie intake consistent and consume those calories in six meals instead of three. Many people who try this end up eating MORE calories. Monitor your calories closely, and be sure each small meal contains some protein.

Don’t be afraid of fat. When you eat fat, it slows down gastric emptying. This helps with hunger control since foods stay in your stomach longer and reduce the production of ghrelin. Pine nuts contain a type of fat called pinolenic acid that stimulates a peptide called GLP-1 and the peptide hormone CCK, produced by your intestines, which boosts satiety. Sprinkle them on salads or into soups. Try toasting them to bring out their flavor.

Hunger is a complex but very powerful motivator. Fortunately, changing the composition of your diet and the frequency with which you eat it can help reduce those hunger pangs that cause you to snack on the wrong foods. That’s a good thing when it comes to controlling your weight.

One thought on “What Is Hunger and How Can You Control It?”