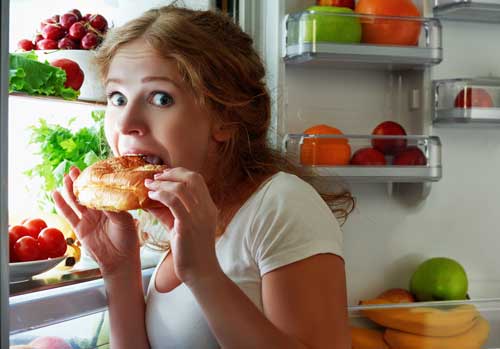 When you’re hungry and your stomach growls, it feels like hunger is coming from your tummy, but your tummy is actually a secondary player in the “hunger game.” It’s actually your brain that makes you yearn for something to eat, hopefully, something healthy. So, what actually is going on when you are ravenously hungry? More importantly, how can you make quiet those signals when your desire to eat is out of control?

Hungry? It All Begins in Your Brain

Although your brain plays the biggest role in hunger control, it responds to feedback from other parts of your body, particularly your stomach. The portion of your brain most closely involved in controlling hunger is the hypothalamus, a part of your brain that also regulates other bodily functions like temperature, thirst, memory, sleep, growth, and more.

Other signals that tell the hypothalamus in your brain that you need to eat are chemicals released in response to eating or not eating. One of the major ones is a chemical called neuropeptide Y, or NPY. NPY is released by your brain when you haven’t eaten in a while and your energy stores have dwindled. Once released, you feel hunger pangs and want to eat and keep eating until NPY drops again. In fact, studies suggest that the reason some overweight and obese people overeat is that their NPY levels aren’t suppressed as easily when they eat a meal. By the way, hunger pangs are actual stomach contractions in response to being hungry.

NPY doesn’t act alone. It gets feedback from other hormones and chemicals, particularly two appetite hormones called leptin and ghrelin. After eating a meal, your body is in a fed state. Under normal circumstances, leptin, produced by fat cells, goes up and ghrelin, made by cells that line your stomach, goes down.  In contrast, if you haven’t eaten in a while, leptin falls and ghrelin rises and you feel hungry. These hormones communicate with NPY, supplying the input it needs to decide whether you need to feel hungry or not. Leptin is an appetite suppressant while ghrelin is an appetite stimulant.

People who are obese often have high levels of leptin, an appetite-suppressing hormone – so why is it sometimes hard for them to get full? Many are leptin resistant, meaning they have plenty of leptin but when leptin binds to its receptors, the satiety message isn’t being conveyed. Just as with insulin resistance, the receptors of some obese people are desensitized to leptin. In fact, leptin resistance is believed to be a major driving force behind obesity.

Although leptin and ghrelin are major appetite hormones that feed back to your brain, they aren’t the only ones. At least 15 different chemicals and hormones interact with your brain to regulate hunger. Some of these are produced by your small intestines and enter your bloodstream. Others, like serotonin and dopamine, are produced in your brain.

Now that you know what causes hunger, how can you make these factors that stimulate and suppress appetite work in your favor, so that you’re not hungry all the time?

Hungry? Change the Composition of Your Diet

As you know, there are three macronutrients – protein, carbohydrates, and fats. Of these, protein is the most satiating. This means, of course, that you should include a source of protein at every meal as well as a source of fiber. Fiber fills you up by drawing in water and causing your stomach to stretch. Remember, stomach distension feeds back to your brain and tells your brain you’ve had enough to eat. Eating foods high in fiber and water, like fruits and vegetables, work well because they cause more rapid stomach stretching. Also, avoid processed carbohydrates and sugar since they cause rapid blood sugar fluctuations that stimulate cravings.

Lack of sleep is a powerful hunger stimulator. When you skimp on sleep, especially if you drop below 6 hours a night, your leptin level falls and ghrelin goes up. That’s a double whammy with regard to hunger. In response to too little sleep, you feel hungrier and crave unhealthy carbs. If lack of sleep becomes a habit, it reduces insulin sensitivity and your metabolic health begins to decline. To make matters worse, when leptin drops, it slows your metabolism. So, you end up hungry, insulin resistant, and with the added burden of a sluggish metabolism. The result? You may find that your body fat percentage goes up. To make matters worse, chronic lack of sleep causes your adrenal glands to produce more cortisol. That further enhances the hunger you experience and the decline in insulin sensitivity. Now you see why sleep is part of the weight control equation.

Stress is another stimulus for cortisol release. Think of cortisol as the “stress hormone” one that also increases your appetite for unhealthy foods. As you eat more in response to the effects of cortisol, your body composition changes too since cortisol stimulates the breakdown of muscle. So, you end up with less muscle and a higher percentage of body fat. You’re also likely to notice more fat storage around the tummy area.

Cortisol isn’t just bad for your body composition, it’s harmful to your metabolic health since it reduces insulin sensitivity. As you probably know, insulin resistance is a precursor to other health problems, including type 2 diabetes and heart disease.  As you get older, the impact of cortisol is even greater because you no longer produce the quantities of anabolic hormones, like growth hormone, that you did when you were younger.

Unfortunately, we don’t just eat in response to real hunger. There’s an emotional component to eating too. During stressful times, it’s easy to turn to food for comfort, further compounding the weight gain and change in body composition. Even if your hunger signals tell you to stop eating, you keep eating to satisfy an emotional hunger. In reality, the reason people have problems losing weight has less to do with the ability to control hunger than the ability to control the desire to eat. So, make sure to address stress issues if you’re having weight problems.

Yes, exercise burns calories but it has other health benefits as well. Exercise is a good stress reliever and may help control emotional eating by its effects on brain chemicals, like serotonin and dopamine. Mind-body exercises, like yoga, also reduce the release of cortisol. There’s also evidence that exercise helps reverse leptin resistance.

Hunger control is complex and we sometimes override hunger signals and eat anyway. That’s why it’s important to address issues like stress and lack of sleep along with eating balanced meals with protein and fiber. Doing these things can help you fight and win your battle with hunger.