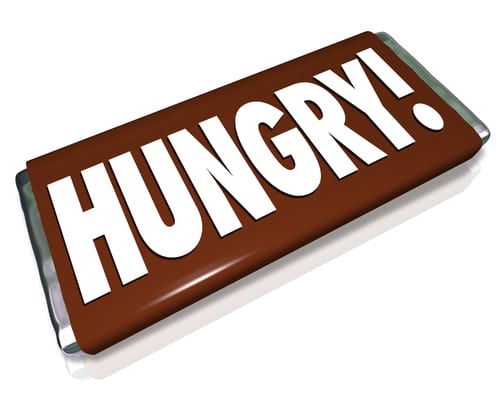 Can’t stop snacking? Make sure you’re not skimping on sleep. Research already shows a link between not spending enough hours in dreamland and weight gain, but exactly how sleep contributes to weight gain and overeating isn’t clear. According to some research, the answer lies with the way sleep affects two appetite hormones that turn on and off the desire to eat.

The Dueling Duo: Leptin and Ghrelin

Leptin and ghrelin are hormones that control appetite control. Leptin is produced by fat cells and sends a signal to the brain that curbs the desire to keep eating. It essentially puts a brake on your appetite. Some obese people don’t respond as readily to the satiety signals leptin sends because their body is resistant to it, a condition known as leptin resistance.

Ghrelin is produced by cells lining the stomach and pancreas. It’s the hormone that causes your to stomach to growl and sends you rushing to the kitchen for a snack. Ghrelin is a hormone you don’t want working overtime if you’re trying to control your weight.

Together, leptin and ghrelin working quietly behind the scenes in conjunction with other hormone players to control your desire to eat. They’re a powerful duo when it comes to appetite control.

In a study published in Annals of Internal Medicine, researchers measured the effects of inadequate sleep on appetite hormones in 12 healthy young men of normal weight. They did this by restricting the amount the men slept for 2 night consecutive nights. On those nights, they were only allowed to sleep for 4 hours.

When researchers measured levels of appetite hormones in these sleep-deprived young men, they found that their leptin levels had dropped by 18% and their ghrelin levels rose by 28%. Not surprisingly, their appetite also increased, and they experienced more cravings for high-carb, energy dense foods.

Even though this study was small, other research also suggests that lack of sleep boosts appetite and cravings for carbs. Some experts believe it’s an underappreciated contributor to obesity.

If you deprive yourself of sleep, levels of the stress hormone cortisol rise. Cortisol is a hormone that breaks down muscle tissue, reduces resistance to infection and boosts belly fat, especially the most dangerous kind, visceral fat. Cortisol is another hormone that can trigger cravings for carbs and send you running to the vending machine for a high-calorie snack.

As you can see, a variety of hormonal players work overtime when you don’t get enough shut-eye. That’s why sleep should be a priority in the same way exercise is. If you’re working out regularly and aren’t shedding body fat, keep a sleep diary for two weeks and see if you’re getting enough sleep. If not, it’s time to re-prioritize.

To keep your appetite hormones in line, between seven and eight hours of sleep a night appears to be optimal. Less than that and you’ll have a harder time reigning in your appetite and may find it more difficult to resist high-carb treats like doughnuts that usually get passed around the office.

Don’t underestimate the importance of sleep for controlling your weight. Lack of it can upset the delicate balance between your appetite hormones and undermine your efforts to control your weight. Next time you’re tempted to watch a late show on television, head to bed instead. You’ll feel better the next day, and you may eat less.

What Is Hunger and How Can You Control It?

Do All Types of Fiber Control Appetite Equally?