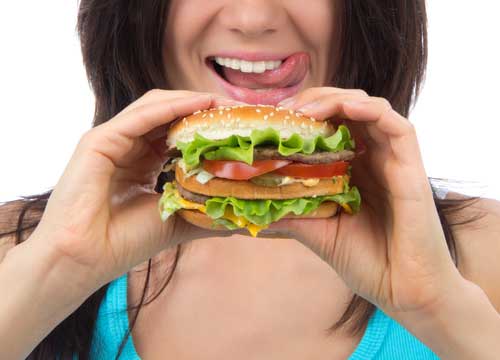 Food cravings make it hard to make smart dietary choices. When hunger is beckoning, you’re likely to reach for whatever you happen to be craving, usually something sweet or salty and high in calories. Sometimes cravings for foods are caused by a poor diet, not consuming enough calories or eating foods that cause blood sugar swings, like processed carbohydrates. Some experts believe low serotonin levels in the brain trigger food cravings. However, research also shows that persistent urges to eat the wrong foods may be caused by leptin resistance.

What is Leptin Resistance?

Leptin is a hormone produced by fat cells. Its main job is to let your brain know about the status of your fat stores. Here’s what normally happens: When you have enough stored energy (in the form of fat), fat cells make leptin. Once made, leptin enters your circulation and makes its way across the blood-brain barrier, the gateway into your brain. There it tells your hypothalamus that you’re loaded up from an energy standpoint. In response, your brain turns off hunger and food cravings and you no longer feel the desire to eat. When leptin levels fall again as energy stores drop, you again feel hungry.

In the case of leptin resistance, this carefully orchestrated system goes awry and no longer works as it should. Cells in the brain that answer to leptin stop responding and fail to turn off hunger and cravings. Since the leptin being made isn’t doing its job, your fat cells produce more and more of this fat-regulating hormone until you have high levels of circulating leptin. Yet your brain STILL doesn’t get the message that you’re stocked up on energy and doesn’t turn off your appetite, so you continue to feel hungry and have food cravings after you’ve eaten a meal and between meals. Leptin normally acts to maintain an energy balance but only when the system works right and cells are responsive to its messages.

Of course, this is a simplified look at leptin. In reality, leptin also exerts effects on your body by interacting with other hormones like neuropeptide Y, ghrelin, and insulin. In addition, leptin modifies your resting metabolism through its effect on thyroid hormone production. When leptin levels increase, as a signal that energy stores are adequate, your metabolism speeds up, but only as long as you’re not resistant to leptin. If you ARE resistant to leptin, cells don’t get the message that you have enough stored energy and you don’t get the metabolic boost that helps you burn the calories you’ve just eaten. So, you feel hungry, have cravings, and your metabolism is stuck on idle, all of which make it hard to control your weight.  In addition, women with leptin resistance can have fertility problems.

What causes the finely-tuned leptin system to fall out of whack? Lack of exercise, poor sleep habits, weight gain, eating too much and consuming processed carbs are all factors in leptin resistance. A common sweetener in processed foods, fructose, is another contributor to leptin resistance according to a study published in the American Journal of Physiology-Regulatory, Integrative, and Comparative Physiology.

Can You Reverse Leptin Resistance?

Lifestyle changes can help you reverse leptin resistance and get those cravings under control. There’s more than one reason to take charge of leptin resistance. Research shows high leptin levels increase the risk of a variety of cancers, including breast, prostate, and colon cancer. In fact, experts believe the reason people who are obese are at greater risk for some forms of cancer can be partially blamed on their higher levels of leptin. Research shows leptin promotes the growth of tumor cells.

What can you do to get a handle on leptin resistance? Studies show vigorous bouts of exercise, like high-intensity interval training, can lower leptin levels while long periods of steady-state cardio can actually fuel leptin resistance by raising cortisol. Exercise also improves insulin sensitivity, which should indirectly help leptin resistance.

Women may have a harder time reversing leptin resistance because they naturally have higher leptin levels than men, partially explaining why women have more body fat. Plus, women need a certain amount of leptin for reproductive health.  Higher leptin may also explain why women have more cravings for carbs. To get your leptin feedback system working properly again, add high-intensity interval training and resistance training to your workouts, limit steady-state cardio, and eat a diet that emphasizes protein and healthy, fiber-rich carbs. Eliminate processed foods, especially those sweetened with fructose from your diet. Make sure you’re getting at least 7 hours of sleep a night and take steps to control your stress level. Stress and lack of sleep elevate cortisol and cortisol fuels leptin resistance.

Leptin resistance is an under-appreciated cause of food cravings and stubborn body fat that won’t seem to budge. You can improve how your cells respond to leptin by changing your diet and sleep habits, doing moderate amounts of high-intensity exercise, and by taking steps to control your stress level.

IDEA Health and Fitness Association. “The Low Down on Leptin”

The Science of Food Cravings

Weight Maintenance: New Study Shows How Your Body Works Against You

Leptin Resistance and the Obesity Epidemic