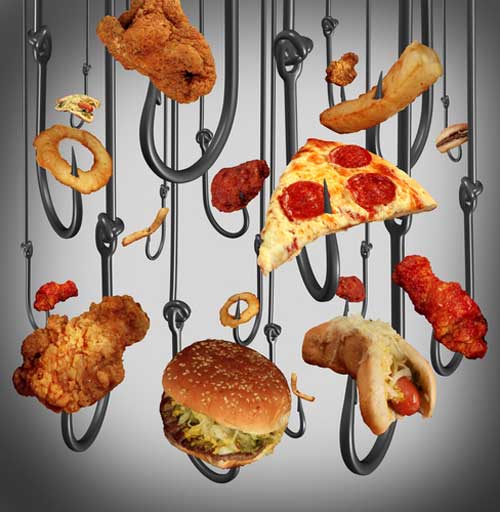 Food cravings – chances are you’ve had them at one time or another. For some people, cravings happen a lot, sometimes every day. Unfortunately, if they act on them, they end up gaining weight. It wouldn’t be so bad if our bodies craved healthier foods like apples or a fresh garden salad, but more likely, those pesky cravings are for calorie-dense foods made from refined flour and often with added sugar. In fact, the way ultra-processed foods are manufactured makes them crave-worthy. Researchers work hard to find just the right combination of taste and aroma to keep you coming back for more.

Cravings often have little to do with real hunger, the type of hunger that demands your attention when you haven’t eaten in a while and your body needs sustenance. Instead, it’s akin to “hedonic hunger,” the desire to eat something tasty even when your body doesn’t need the calories. How can you distinguish between the two? If an apple sounds appealing, you’re probably really hungry, but if only a pizza or cookie will do, it’s hedonic hunger. Another example of hedonic hunger is eating a meal and feeling full, at least until you see dessert. Suddenly, your desire to eat is reignited. How many times have you experienced that?

It’s easy to see how hedonic hunger would lead to weight gain. Not only are you eating when you don’t need the extra calories but foods that inspire hedonic hunger are usually calorie dense. So, how can you get those hedonic cravings under control?

According to Jon May, a psychology professor at Plymouth University in the United Kingdom, thinking about food, visualizing what tasty food looks like and how it would taste, fuels hedonic food cravings. When you ask a person to envision an appetizing food, it leads to powerful cravings for that food. Hardly surprising, right? One way to chase away such cravings is to focus your mind on other tasks. According to research carried out by Dr. May, distracting your brain with other endeavors helps extinguish those cravings.

After experimenting with a variety of brain distraction techniques, Dr. May and his team found those that are the most visual are most effective. For example, in one study, they asked college students to envision in their mind doing something enjoyable, unrelated to eating. Not only did this reduce cravings for food but the participants consumed fewer calories for four days after the study. If you think about it, that’s pretty powerful. It’s also more evidence that the mind is a powerful thing.

It’s not hard to test visual distraction out on yourself. Make a list of five activities you enjoy doing. Then, when you next think about food, immediately switch to thinking about one of those activities instead. If possible, actually DO the activity. Either way, you’re tying up your brain with other thoughts that are unrelated to food.

Visualization isn’t the only sense you can use to crush cravings. Small studies show that taking a whiff of vanilla when a craving strikes can help break its control over you. In fact, research shows that catching the scent of vanilla before a meal may help you eat less. Researchers at St. John’s Hospital in England tested a patch that released the pleasing aroma of vanilla. What they found was participants who wore the patch on their hand experienced fewer cravings for sugary foods and beverages. You might discover that taking a whiff of a pad with vanilla essential oil or vanilla extract (preferably natural vanilla extract) will help you tame your own cravings.

If you’re cutting your calorie intake too much in hopes of losing weight, you can expect to be hungry and have cravings. Make sure you’re not reducing your calorie intake by more than 500 calories daily even if you’re trying to lose weight. Rather than cutting back harshly on the amount of food you eat, burn calories through exercise, another cravings buster. Also:

.   Get at least 7 hours of quality sleep each night. Lack of sleep can dial up hunger and cravings.

.   Reduce the amount of stress in your life. Stress causes a rise in cortisol and this increases cravings.

.   Keep foods that spark cravings out of your home and out of easy reach at the office. (no candy jar on the desk)

.   Reduce refined carbohydrates and sugar in your diet. These cause rapid blood sugar changes that can bring on cravings.

.   Find a healthier substitute. When cravings strike and you can’t distract, have a healthier, “go to” alternative. How about a cup of herbal tea or a handful of grapes? Freezing grapes beforehand will give them a popsicle-like taste and texture.

Finally, don’t be too hard on yourself. Don’t be so restrictive in your eating habits that you eliminate all “treats.” A study published in the International Journal of Eating Disorders showed participants who restricted their favorite foods, in this case, chocolate, experienced MORE food cravings. Whenever you tell yourself you CAN’T do something or eat something, your mind rebels.

Try these tips to tame your cravings. Visual distraction can be an effective technique for avoiding unplanned splurges. Just don’t get so restrictive that it backfires on you.

LiveScience.com. “The Science of Hunger: How to Control It and Fight Cravings”

Care2.com. “The Scent that Stops Cravings in Their Tracks”