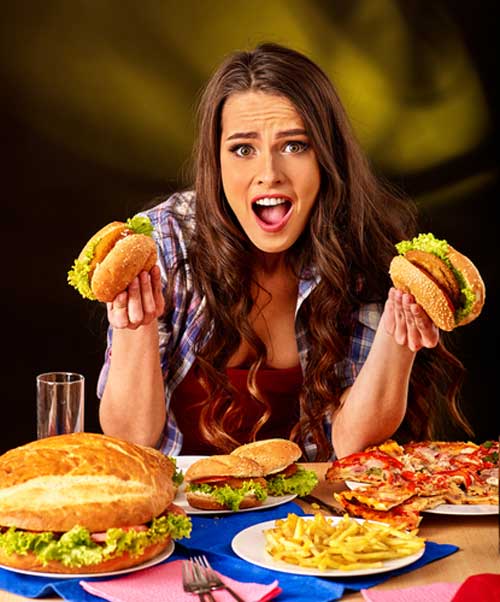 What does it mean to be hungry? The answer isn’t as simple as it sounds. The dictionary defines hunger as a strong need or desire for food – but desire and need are two different things. That’s why some scientists now believe there are two types of hunger: “real” hunger and hedonic hunger. It’s the second type that works against us when we’re trying to achieve a healthy body weight.

What is Hedonic Hunger

It was a clinical psychologist at Drexel University in Philadelphia, Pennsylvania who popularized the term “hedonic” hunger almost a decade ago. The term is best described as an overwhelming desire to eat something tasty even when your body isn’t in an energy-deficient state. In other words, it’s eating for pleasure or to satisfy a deep inner urge rather than a true biological need.

One problem with hedonic hunger is it causes you to consume more calories than your body needs. You munch out on foods that taste good and the excess calories are stored. Three weeks later you’re up a pant size. The second problem is hedonic hunger signals a loss of control over eating habits. Plus, it plays a role in food addiction and binge eating.

Unlike real hunger, hedonic hunger has an emotional component. If you see an attractive display of food or breathe in its aroma, you want to devour it, regardless of whether you’re in an energy depleted state or not. Unfortunately, the types of foods that trigger hedonic hunger typically aren’t ones you feel good about eating, like fruits and vegetables, but sugary, high-fat foods like ice cream, pastries, bread, and pasta.

Real hunger is driven by the biological need for more calories. Your body senses you’re in a low energy state and, in response, signals a portion of your brain called the hypothalamus. It does this through the action of several key appetite hormones that act as messengers.

How does this happen? When you haven’t eaten in a while, cells in the lining of your stomach produce an appetite hormone called ghrelin that tells your hypothalamus to make you feel hungry. Ghrelin increases your drive to seek out food.

Another key appetite hormone you’re probably familiar with is leptin. Its action is the opposite of ghrelin. When you have plenty of energy and stored fat, fat cells produce more leptin. This signals your hypothalamus that you have enough stored energy. In response, your hypothalamus reigns in your desire to eat. Plus, your metabolism increases to burn more energy so that you don’t end up with too much-stored fat.

Your stomach and intestinal tract also produce appetite-suppressing hormones, like peptide YY and CPK, that communicate with the hypothalamus in the brain to reduce the urge to eat when you have a full tummy. These hormones work together in ensure you have enough energy on board and to reign in overeating.

With such a finely tuned system, why is hedonic hunger even an issue? It became apparent in the 1990s that there’s a second brain circuit, a sort of “reward” pathway that stimulates hedonic hunger. This circuit is easily turned on, even by the sight and aroma of sugary and fatty foods – and these foods are everywhere.

For example, when you catch a whiff of a chocolate chip cookie baking in the oven, smell receptors send an impulse through nerves that travel to the reward centers in the brain. In response, the reward centers produce more dopamine, a brain chemical associated with pleasure. Who doesn’t like good feelings? So, you learn to link pleasurable feelings and the release of dopamine with sugary, fatty foods like chocolate chip cookies. Next time you’re stressed out and need to feel reward and pleasure, you may seek to recreate it by eating cookies.

Unfortunately, if you keep eating foods that activate dopamine release, your brain is flooded with dopamine and it becomes desensitized to it, in much the same way you become acclimated to other chemicals like caffeine.  As a result, you have to eat more chocolate chip cookies to get the same pleasurable feelings. It’s not hard to see how food addiction resembles drug or alcohol addiction based on the way they both activate the brain’s reward center.

As it turns out, at least one of the appetite hormones, ghrelin, involved in true hunger also plays a role in hedonic hunger. Research over the last decade shows ghrelin stimulates the release of dopamine, the brain chemical that gives pleasure and makes you feel “rewarded.” Interestingly, research also shows people who undergo bariatric surgery to lose weight are less stimulated by the sights and smells of sugary, fatty foods afterward and less prone to hedonic hunger. It seems that altering the anatomy of the gut through surgery disrupts the “reward” pathway that activates hedonic hunger.

Why some people experience more hedonic hunger than others isn’t clear. Genetics and environmental factors like stress likely play a role. Also, we’re exposed to so much more palatable food these days on television, in ads, and on sites like Pinterest and Instagram. For some people, merely the sight of these foods can bring on hedonic hunger.

Eating more protein and fiber helps control “real” hunger but isn’t as effective for hedonic hunger since this form of hunger is driven by reward and pleasure. Many experts believe the best way to tackle hedonic hunger is to keep tempting foods out of reach – and that means not buying them. When you reduce your exposure to palatable foods, it reduces the hedonic hunger drive.

The more you stay away from such foods, you weaken the hedonic reward pathway. Instead, choose whole foods and eat them mindfully. Learn to appreciate the natural sweetness of a fresh piece of fruit rather than an overly sweet pastry or cookie. It takes time but persistence will pay off.

Psych Central. “Are We Slaves to Hedonic Hunger?”

Hungry All the Time? Increase the Micronutrients in Your Diet