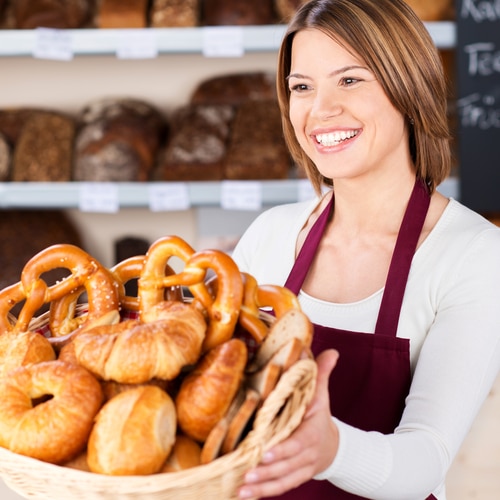 Carbohydrates – they get a bad rap. Talk to anyone on an Atkin’s diet and they’ll tell you carbs are the enemy. They’ll explain how they raise your blood sugar level rapidly and cause an insulin spike that makes it easier to store fat. There’s some truth to this – if you choose the WRONG carbs. You need a certain amount of carbs in your diet. Carbohydrates are the fuel your body prefers to run on, especially your brain – and your brain sucks up a lot of glucose. That’s why people on a strict low-carb diet sometimes experience “brain fog.”

Carb sources aren’t all the same. A bowl of lentil soup and a doughnut both have a significant amount of carbs but your body handles each differently. The doughnut sends your blood sugar soaring along with your insulin level while the carbs in the lentil soup are slowly absorbed, causing a more subdued rise in blood sugar and insulin. Their effect on your body isn’t equal either. The lentil soup will give you sustained energy for hours while the doughnut will send it crashing shortly after eating it. That’s when you’ll begin craving your next carby snack.

Researchers determine a food’s glycemic index by giving a person a set amount of a food and then following their blood sugar for two hours. After charting the blood sugar response, they assign each food a value based on how its blood sugar response compares to a “standard” glucose load like pure glucose or a piece of white bread.

How is this useful? You could buy a little book of glycemic values and use it to determine whether a carb is a good carb but that’s more than most people want to do. Can you blame them? Plus, there are some limitations to the glycemic index. For one, it doesn’t take into account the total amount of carbs in a food. A food can have a high glycemic index but still not raise your blood sugar rapidly because it simply doesn’t have a lot of carbs. Carrots are an example of that. They DO have a high-glycemic index, but you’d have to eat lots of them to get a spike in blood sugar.

Another measure called glycemic load takes into account the total amount of carbs in the food. Therefore, it gives you a better idea of how a particular food will affect your blood sugar than the glycemic index does. There are other problems with glycemic index and glycemic load. These values can vary depending on how a food is cooked – glycemic index goes up the longer you cook it and other factors like what you eat it with. Plus, when you look at charts listing glycemic indexes and loads you’ll often find discrepancies.

Unfortunately, glycemic index and glycemic load complicates things and there are better ways to distinguish good carbs from bad carbs. Here are some general rules you can use to identify good carbs.

The first rule of thumb for making smart carb choices is to understand processed foods are generally not the kind of carbs you want on your dinner plate. Most are heavily processed, low in fiber and have added sugar, all of which cause them to be absorbed rapidly. In contrast, unprocessed, whole foods retain their natural fiber. This slows down absorption and reduces the rise in blood sugar.

Therefore, one of the marks of a good carb is it’s high in fiber. The reason fiber is important is because it slows down the absorption of a food, and the more slowly a food is absorbed, the less it impacts blood sugar and insulin. That’s a good thing.

What’s so bad about a big rise in insulin? For one, repeated insulin spikes can lead to insulin resistance, a precursor to type 2 diabetes. Plus, when insulin is floating around in your bloodstream, it makes it far easier to store fat, especially in areas like your waist and tummy. Whether you’re trying to control your weight or reduce your risk for type 2 diabetes, keeping your insulin levels lower helps. High-fiber foods help by slowing the absorption and preventing blood sugar and insulin spikes.

If you don’t want to be bothered with glycemic index and glycemic load, here are some guidelines for choosing healthy carbs:

Reduce the amount of processed foods in your diet. If you must buy something in a package, jar or can, look for items with as little added sugar as possible (less than 5 grams) with as much fiber as possible. (5 grams or more)

Choose whole foods as your primary carb sources – fruits and vegetables. They’re naturally high in fiber to slow absorption. As healthy as fruit juice sounds, even from fruits you’ve juiced at home, the fiber is removed during juicing so you’ll absorb them rapidly and get a greater blood sugar rise. Stick with whole fruits instead. If you like drinking your fruits, a smoothie without added sugar is a better option because the fiber is still there.

Avoid the classic white foods that cause a rapid rise in blood sugar – white rice, white potatoes, pasta and foods made with white flour. If you enjoy potatoes, sweet potatoes are an acceptable choice if you eat them in moderation. They’re also a good source of beta-carotene that’s not in white potatoes. Another option that’s high in fiber and can serve as a rice substitute is quinoa.

The Best Time to Eat Dessert

Healthy carbs should make up the majority of your diet but we all need a little “splurge” once in a while, say an occasional cookie, piece of cake or a bowl of ice cream. The best time to eat such a treat is at the end of a high-protein meal – not as a standalone. Protein from a meal helps to reduce the glycemic response that comes from eating a sugary dessert.

Another way to reduce the blood sugar response to a dessert is to add fiber. You could do this by sprinkling ground flaxseed on your dessert or even psyllium husks – but be forewarned, the psyllium won’t make it taste very good. There was a study showing psyllium with meals reduces the blood sugar rise in response to that meal. If you don’t like sprinkling psyllium on your food, there are psyllium capsules you can take.

Hope this gives you a better idea of what a good carb is and how to distinguish it from a carb that can spike your blood sugar. You can’t go wrong by sticking to whole foods, especially non-starchy vegetables. Enjoy carbs but make sure you’re choosing the right ones.

3 Characteristics of a Healthy Carbohydrate