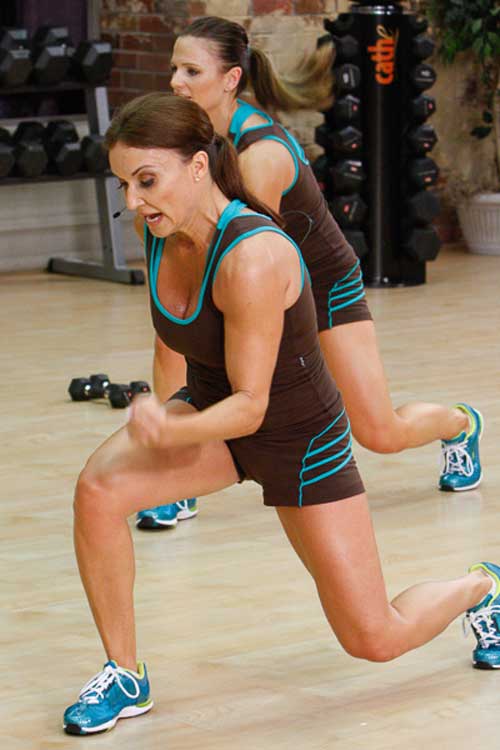 Glycogen is a storage form of glucose composed of many glucose units that form a complex structure with many branches. With its rather intricate, glucose-rich structure it’s a viable source of energy for muscle cells who love having lots of it around. Your muscles and liver both store glycogen so they can break it down to glucose. In muscles, the glucose that comes from glycogen breakdown is used to make energy, in the form of ATP, to sustain muscle contractions.

When you’re sweating it out doing a HIIT routine, your muscles tap into glycogen stores at a rapid rate and use it to make ATP. During less intense, steady-state aerobic exercise, muscles depend less on glycogen, since muscles can use fat as a fuel source during lower intensity exercise. The more intense the exercise, the more your body depends on carbohydrates as a fuel source to make ATP, and the more quickly muscle glycogen stores are depleted.

Your liver, too, stores glycogen, and in times of need, it can break down its own glycogen into glucose and release it into the bloodstream where it’s primarily used as a fuel source for brain cells. As your blood sugar level drops, it signals to your liver to break down glycogen to glucose so your brain can use it to keep you awake and alert. In that way, the liver is an unselfish organ that donates glucose to other cells, including brain cells, when they run low on fuel.

After a long or intense workout, your muscles and, to a lesser degree your liver, may be depleted of glycogen since these organs can only store so much of this branched-chain form of glucose. Glycogen attracts water, so carrying around lots of glycogen would increase your weight to the point you’d have trouble getting around. So, what should be a priority after a hard workout? Replenishing glycogen so that your muscles have a fuel source to use to make ATP.

Carbs Are a Performance Enhancer

When muscle cells are depleted of glycogen, it has a dramatic effect on exercise performance, especially high-intensity exercise. You may have heard marathon runners talk about “hitting the wall” or “bonking,” a phenomenon that happens when muscles run out of glycogen. Legs become weak and tired and the motivation to keep exercising becomes almost non-existent. At that point, the pace of exercise slows and there’s an overwhelming desire to plop down on the pavement and take a nap. Fortunately, fat stores serve as a back-up fuel source, but converting fat to energy is slower than breaking down glycogen, so even the most motivated marathon runner has to slow their pace when they’re using mainly fats for fuel as opposed to glycogen.

You don’t have to be a marathon runner to bonk. If your muscles run out of glycogen, because you didn’t consume enough carbs prior to working out or because your training session was long and intense, you too can “hit the wall” and have to slow down or stop. The physical symptoms you feel at this point, the leg fatigue and weakness, is primarily a result of muscle glycogen depletion, while the mental fatigue and loss of motivation are due to low levels of liver glycogen, vital for supplying the brain with sugar.

Fill Her Up: Replenishing Muscle Glycogen

Unlike a car, you can’t go to a gas station to fuel up your muscles and liver with glycogen – you have to build up muscle glycogen stores through diet. As you might expect, your muscles crave carbohydrates, especially after a workout, since dietary carbs can be broken down to simple sugars and converted into glycogen.

Some studies show there’s a “window period” of about 30 minutes after a workout when consuming carbs maximally enhances muscle glycogen synthesis. One study showed delaying carb intake by 2 hours reduced glycogen synthesis by 50%. That’s why you don’t want to wait too long to have a recovery snack. In reality, not all studies support the idea that the window period is this short or that nutrient timing is all that important. What is clear is that you need a post-workout snack containing carbohydrates, especially if you’ve done an exhaustive workout. How much do you need? As a general rule, the amount of carbohydrate you should consume should be around 1.5 grams of carbs per kilogram of body weight.

The Role of Protein in Post-Workout Nutrition

It’s not just carbohydrates that should be part of your post-exercise snack, studies show combining carbohydrates with protein leads to a greater synthesis of glycogen. So, eating a combo snack with carbs AND protein may enhance glycogen synthesis more than carbs alone. How much protein do you need? Between 20 and 40 grams – it’s doubtful that your body can absorb more than that amount at one time.

Why does eating a combination of protein and carbs jumpstart muscle glycogen synthesis more than isolated carbs? Both carbs and protein signal the release of insulin so consuming the two together has an additive effect on insulin release. Insulin isn’t just a fat storage hormone, it helps to deliver glucose into cells and promote the synthesis of glycogen, exactly what you need after a workout, not to mention the protein is important for muscle recovery. Plus, taking in carbs after a glycogen-depleting workout stymies the release of cortisol, a catabolic hormone that, among other things, has the unwanted effect of breaking down muscle protein.

What about Recovery from Resistance Training?

You need a recovery meal or snack after resistance training too. With so much focus on post-workout protein, it’s easy to forget about the importance of taking in carbs after training with weights or resistance bands. Carbohydrates stimulate insulin release to help ferry the amino acids from the protein you’re taking in into muscle cells so the muscles you worked can repair and recover. After a workout, your muscles are crying out for carbs and protein, make sure you’re not skimping on post-workout nutrition.

Yes, it’s important what you do during a workout, but it also matters what you do afterward in terms of nutrition. Your workout isn’t over until you’ve given your muscles the nutritional support they need to refuel and rebuild. Make time for a small or snack!

4 Things You Need for a Successful Exercise Recovery

Nutrition and Hiit Training: Are You Fueling Up Properly?