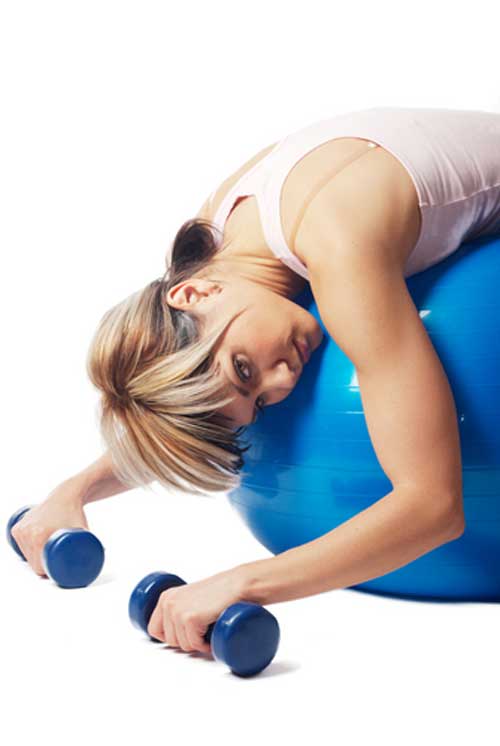 We all know what exercise fatigue feels like – the feeling that you can’t do another bent-over row or another set of jump squats. Fatigue makes your muscles feel like lead and gives you that familiar burning sensation. Eventually, it forces you to stop and take a breather or at least lower the intensity. Have you ever wondered why you become fatigued and whether it’s possible to override it?

Exercise fatigue is a complex phenomenon. It has a “central” component, mediated by your brain and central nervous system, and a “peripheral” component, caused by the failure of your muscles to convert input from your brain into muscular contractions.

Not surprisingly, a fit person becomes fatigued less quickly than an unfit person who has undergone little or no training and is in poor cardiovascular shape. Environmental conditions are also a factor. You become fatigued more quickly when working out in a hot or humid environment, especially if you aren’t drinking enough fluids.

Central fatigue, as discussed, is when your brain and central nervous system fail to send nerve input to the working muscles. Motor neurons are large nerve cells that originate in the central nervous system and connect with a few or many hundreds of muscle fibers. A motor neuron and the muscle fiber it innervates is called a motor unit. When motor neurons are activated, they release a chemical called acetylcholine that activates the muscle through a sequence of events that involves the release of calcium.

Central fatigue may be caused by dysfunction of the brain or central nervous system, but it’s more commonly related to psychological factors. Have you ever felt so tired you couldn’t eke out another rep? Chances are you still had energy reserves and the ability to do another rep. Your brain tells you to stop BEFORE your energy supply actually runs out. It’s a way to protect you from potential harm.

During intense exercise, such as HIIT training, lactate and hydrogen ions build up and interfere with muscle contractions by preventing actin and myosin from interacting with one another, a requirement for muscle contraction. The release of calcium is also needed for a muscle to contract, and build-up of hydrogen ions during intense exercise can interfere with calcium.

Contrary to popular belief, most research suggests lactate itself is not responsible for fatigue. It’s more likely that hydrogen ions and drop in pH is. In fact, lactate can be circulated back to the liver and converted to glucose and used as a fuel source.

Your Body Can Adapt to Become More Exercise Fatigue Resistant

The good news is this. When you do regular high-intensity exercise, your body becomes better at handling the hydrogen ions and pH drop that takes place during an intense bout of exercise. As a result, with regular training, your muscles become more resistant to fatigue and you’re able to exercise longer at the same intensity. Steady-state, long-duration exercise is also dependent on adequate amounts of ATP, the energy currency of all cells. During high-intensity exercise, your muscles mostly get ATP from creatine phosphate and muscle glycogen stores, but during steady-state, lower intensity exercise, your muscles gain a steady supply of ATP from the breakdown of fat as well. Since most of us have a considerable supply of fat, you can potentially exercise for hours or days at a low intensity by utilizing fat as a fuel source, while muscle glycogen stores are usually depleted after about two hours of exercise. This leads to feelings of extreme fatigue, especially if accompanied by a drop in blood sugar.

When you’re exercising in the heat or high humidity, your core body temperature rises. This increases your heart rate at any given intensity of exercise and leads to earlier fatigue by both a central and peripheral mechanism. That’s why it’s so important to drink fluids, and with prolonged exercise, an electrolyte-rich beverage is a better choice. By exercising in the heat on a regular basis, over a period of two weeks or more, your body becomes heat acclimated and you experience less fatigue. One way your body adapts to exercising in the heat is through an expansion of plasma volume, the amount of protein-rich fluids circulating in your bloodstream. Your body also adapts to exercising in heat by beginning to sweat earlier in a workout for better body temperature control.

How much do psychological factors impact fatigue? If you think you’re exhausted, then you are, at least that’s what a 2013 experiment showed. When researchers asked bikers to cycle to exhaustion, they were able to pedal much further when they repeated positive mantras in their head such as “I’m feeling good.” This suggests exercise fatigue is determined, at least to some degree, by what’s going on in your brain.

Having a positive, upbeat conversation with yourself about how you’re feeling strong and capable of going further or lifting longer may help you push a little harder and not stop as quickly. Most people don’t stop when their fuel reserves are depleted but when their brain tells them too. Your brain is out to protect you when the going gets tough, and successful athletes often learn to override those signals and push a little further. In fact, that’s often what makes an athlete great.

Now that you know a little more about exercise fatigue, use it to maximize your training and be the best you can be from a physical standpoint.

ACE Fitness. “Everything You Need to Know About Exercise and Fatigue”

Science Daily. “Lactic Acid Not Athlete’s Poison, But An Energy Source — If You Know How To Use It

Can Your Mind Help You Conquer Exercise Fatigue?

6 Habits that Drain Your Energy & Make You Feel Tired & Unproductive

Exercise Recovery: Does the Temperature of the Room You Recover in Affect Muscle Recovery?