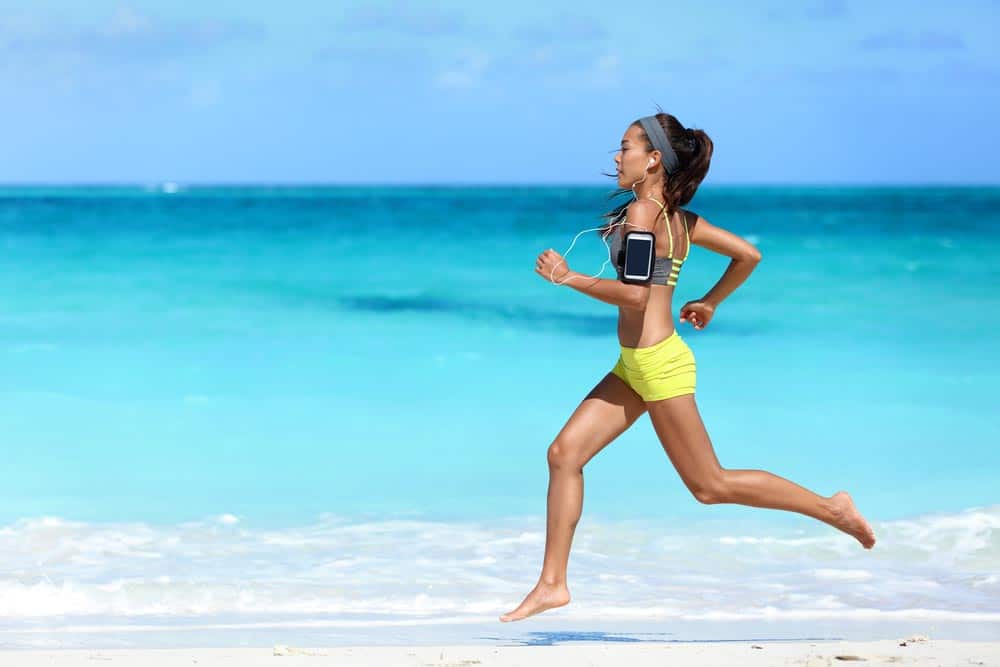 In many parts of the country, summertime heat and humidity are forces to be reckoned with in the summer. You may have the luxury of working out in a temperature-controlled environment during the summer and can avoid the extra stress heat places on your body. But, what if you run races, cycle competitively, or play a sport that requires you to exercise in the heat outdoors on a hot, humid day? Hopefully, you already know the importance of staying hydrated, but you might also wonder how heat and humidity impact performance when you exercise in the heat. According to science, it may depend on how acclimated you are to the heat.

It certainly feels challenging to run, cycle, or do any type of workout a hot day. You sweat more and fatigue faster than you do on a cooler day. Your motivation takes a hit as well! It’s tough pushing forward with the sun beating down on you and humidity making it hard to breathe.  But, what about exercise performance? You might wonder whether exercising on hot days significantly impacts your performance and whether humidity is a factor. When the humidity in the air is higher, your body can’t release heat as well as sweating is impaired. This can lead to a rise in body temperature that can impair exercise performance. So, yes, short-term exercising in the heat makes exercise harder. But, what does science say?

A study published in the Journal of Exercise Science and Fitness looked at this issue. In this small study, researchers asked nine, male athletes to perform a Wingate anaerobic test and a V02 max test (to measure aerobic capacity under three conditions. In one, the environment was hot and humid. In the second, it was hot and dry. The third condition was cycling in a room with a moderate temperature and humidity. The researchers monitored parameters like oral temperature and skin temperature before and after the exercise sessions. The study found that participants experienced a reduction in V02 max under hot conditions, although there was no difference between hot and humid and hot and dry. In terms of the Wingate anaerobic, there were no significant differences in anaerobic performance between any of the three groups.

Exercise in the Heat Can Improve Your Endurance

So, research suggests that exercise endurance may suffer when it’s hot outside. But, here’s the interesting thing. Exercising in the heat may actually improve endurance performance if you do it consistently. By exercising in a hot environment, you force your body to become heat acclimated and better able to deal with the physiological challenges a hot day offers.

In a study at the University of Oregon, 20, highly trained cyclists (male and female) cycled for 10 days in a room with a temperature of 104 degrees F. Pretty warm! Another group did the same cycling workout in a cool and comfortable 55-degree F. room. What’s interesting is the cyclists who worked out in the hot environment made greater fitness gains over the 10-day period than the control group did. When researchers retested them in a 55-degree environment, the cyclists who trained in the heat rode 6% faster than those who trained at room temperature. What’s more, they also displayed 5% greater power output at lactate threshold.

Why might this be? The bodies of the cyclists who braved the heat made adaptations that made them better able to handle a hot environment. Their bodies became more efficient at eliminating heat. Let’s look at some of these changes when you exercise in the heat.

Adaptations to Exercising in a Hot Environment

Several changes happen that make your body more efficient at handling the heat. For one, the volume of plasma, or liquid & proteins, in your bloodstream increases. This helps your body better deliver heat to the blood vessels on the surface of the skin, so it can be released. Your body also adapts to exercising in a hot environment by sweating earlier and more profusely to help lower body temperature faster. Plus, the composition of sweat changes during heat acclimatization. The amount of sodium chloride you lose through sweating declines, so there’s less loss of electrolytes. Your heart also adapts and heart rate during exercise drops. It usually takes about 2 weeks of exercising in the heat to become heat acclimated.

Safety is Important When You Exercise In The Heat

Although there are performance benefits to training in the heat, safety is important. You shouldn’t exercise in the heat every day. Once every four or five days is better to avoid placing undue stress on your body. Also, think about whether you really need to boost your performance in this manner. If you don’t run races, marathons, play an outdoor sport, cycle, or spend a lot of times being active outdoors, it’s not necessary.

Start out slowly, particularly if you aren’t accustomed to exercising in a hot environment. Gradually increase the duration and intensity. Practice the rules of good hydration and make sure you’re getting enough salt in your diet to compensate for the electrolytes you’re losing through sweating. If you’ll be exercising for more than an hour in the heat, drink an electrolyte-rich drink. If you feel lightheaded, faint, nauseous, or dizzy, stop immediately, head to a cool spot and drink fluids. Be judicious about training in hot and humid conditions, knowing that hydration and electrolyte replacement is critical.

Exercising in the Heat: How Long Does It Take for Your Body to Adapt?