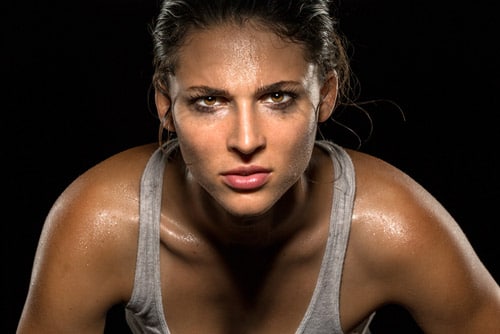 Sweating is a sign you’re working hard – train harder and you’ll sweat more, right? In reality, it’s more complicated than that. How much you sweat depends on a variety of factors, including how hard you’re exercising, the temperature you’re working out in, and the humidity. You might assume that gender is a factor too. Men sweat more than women – or do they? Let’s see what science shows about sweating, gender, and factors that influence how much you sweat.

Is Gender a Factor in Sweat Rates?

A recent study published in Experimental Physiology challenges the notion that men sweat more than women. Researchers at the University of Wollongong in Australia and Mie Prefectural College of Nursing in Japan measured the sweat rate of 36 men and 24 women after asking the participants to exercise at two different intensities (low and moderate) in two separate trials. The body cools off in two ways: by increasing circulation and through sweating.

What they found was body size was a better determinant of sweating than gender. Regardless of sex, men and women with small body sizes sweated less than their larger counterparts. The reason? Smaller men and women have a higher surface area per kilogram of body mass than larger guys and gals. A larger surface area exposed to the environment means it’s easier to lose heat by increasing circulation to the surface of the skin rather than sweating. So, body size is a more important determinant of how much an individual sweats than is gender.

Previously, the consensus was that women, despite having more sweat glands per unit area of skin, sweat less than men even with when they reach similar core body temperatures. However, this study calls this idea into question. One limitation to the study is that the individuals were Japanese and the form of exercise they did was cycling at a low or moderate intensity. Would the results have been similar during high-intensity exercise?

The Role of Body Composition on Sweating

You would expect men and women who have more body fat to have more problems releasing heat during exercise. After all, fat is an insulator that holds heat in. Not surprisingly, men and women with higher body fat percentages are at higher risk of overheating and developing heat exhaustion or heat stroke when in a warm environment. Fat adds extra insulation that slows heat loss through the skin surface. People with a high body fat content also have less surface area relative to body mass for heat release. In fact, heat fatalities are 3.5 times more common in overweight, young adults compared to those of normal weight. Being smaller in size and lower in body fat increases the surface area available to the outside for more efficient cooling.

How physically fit you are is a factor in how much you sweat during a workout. If you’re fit, you’ll sweat at lower body temperature and, therefore, begin sweating sooner. Your sweat will also be more dilute and contain fewer electrolytes. In addition, you’ll lose less sodium in your urine. As you become more physically fit, the fluid volume in your blood vessels increases and this also makes it easier for your body to cool off. It takes about two weeks of regular training in a warm environment to become heat acclimated. Exercise must be at least moderately intense, at least 50% of your aerobic capacity to become heat acclimated.

It’s best to acclimate to warm temperatures in a gradual manner. Start by exercising for 15 minutes in the heat and gradually increase the time. As always, make sure you’re hydrating adequately. Even if you exercise indoors in an air-conditioned environment, getting heat acclimated will make other outdoor activities you do safer and more pleasant.

Other Factors that Impact Heat Tolerance and Sweating

Some people, irrespective of all of these factors, are more profuse sweaters than others. Genetics likely play a role. Some people are genetically predisposed to sweat more and at lower temperatures. You’ll also sweat more if you have more total sweat glands. Less commonly, people who sweat heavily, not just when exercising, have a condition called hyperhidrosis. If you have this condition, sweating disproportionally impacts areas like the palms of your hands, feet, and armpits. It’s not clear what causes this condition, although it seems to be related to dysfunction of the nerves that regulate sweating. Even anxiety and stress can be a factor. Both activate your sympathetic nervous system, which regulates heat release and sweating.

As you can see, a variety of factors influence when you start to sweat and how much sweat you produce during a workout. Contrary to popular belief, gender is less important for determining sweat rates than body size and surface area. Big people and those carrying more body fat typically sweat more, regardless of gender. Being physically fit actually increases the sweat response by causing you to sweat earlier in a workout for more efficient temperature control.

Getting heat acclimated as the weather changes is one of the best things you can do to make outdoor activities safer and more pleasant. Make hydration a priority. When you don’t replace the fluids you lose through sweat, the volume of fluid in your blood vessels falls, your heart has to work harder, and your core body temperature rises.

5 Surprising Myths and Facts about Sweating

Is Exercising in the Heat Less Effective?