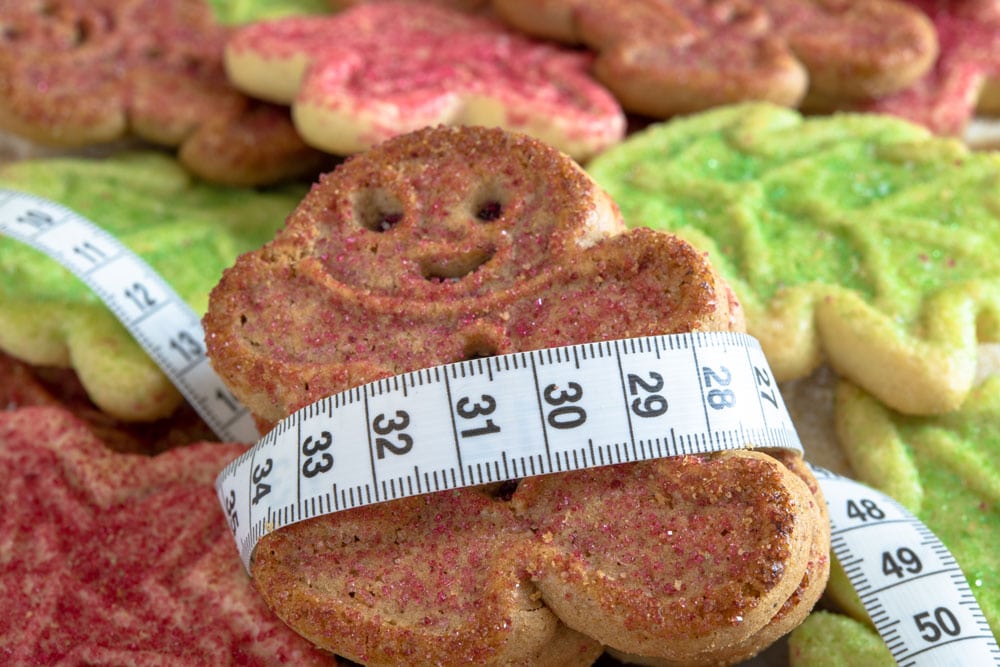 At one time, the focus was on fat and how it expands the waistline. Being more calorie-dense than carbohydrates, dietitians warned clients not to consume too much fat to avoid weight gain. In response to this not so sage advice, the low-fat movement was born. Rather than nosh on healthy sources of fat, like full-fat yogurt and avocados, people stocked up on fat-free and low-fat products and filled their grocery carts with refined carbohydrates and low-calorie snacks like rice cakes.

Despite the pressure to avoid fat, eating fat-free products did nothing to slow the rising rate of obesity. The number of people who were overweight or obese during the fat-free phase continued to expand, along with the collective waistline of Americans. Now dietitians are more likely to recommend cutting back on or eliminating sugar. Then, they would suggest choosing more healthy fat sources rather than adopting a fat-phobic mentality.

If you feel less full after a meal of refined carbs and sugar foods, it’s not your imagination. These types of foods are less satiating than nutrient-dense whole foods. But why?  One reason is processed carbs snacks lack fiber, a key component for satiety. Plus, foods high in sugar are rewarding to circuits in the brain that make you want to keep noshing. Somehow, people can always find room for sugar. Have you ever noticed how dessert sounds appealing even when you’re full and “can’t eat another bite?” People often crave dessert even when they aren’t hungry.

In fact, studies show that people who are obese have a stronger response to sugary foods, meaning they activate the reward centers more and they want to eat more of these tasty and rewarding foods. Therefore, processed carbs and sugar encourages overeating. In contrast, healthy fats and foods high in protein and fiber don’t turn on the brain’s reward circuitry. Plus, fat and fiber slow the movement of food through the digestive tract for more sustained satiety.

If you often munch on sugar and refined carbohydrates, you increase your risk for insulin resistance and pre-diabetes. When you bite into a sugary treat, your pancreas has to release more insulin to helps cells take up glucose. However, when cells are bombarded with insulin, the receptors that respond to this hormone become less sensitive and the pancreas has to release even more insulin to get glucose into cells. Over time, this leads to insulin resistance and a higher insulin level.

Why is higher insulin bad for your waistline and your health? Insulin promotes fat storage and reduces fat breakdown. Plus, when insulin is high, it triggers leptin resistance.  Leptin is an appetite hormone that also plays a role in energy regulation. When it functions as it should, it tells you to stop eating when you’ve consumed enough energy. However, when you have insulin resistance, leptin doesn’t work as well, and you eat more. Plus, leptin increases metabolic rate, but when you have leptin resistance, you don’t get the same boost in metabolism when you eat a meal or snack. People who are overweight or obese often have some degree of leptin resistance.

Another reason sugar and refined carbs contribute to weight gain is people who consume fast food or junk food diet eat fewer nutrient-dense foods. If you’re chomping down on hyperpalable foods with little fiber or nutritional value, you’ll have less room on your plate for nutrient-rich, low-calorie fruits and vegetables.

What you eat matters! Meals and snacks that contain protein, fiber-rich carbs and healthy fats with little or no sugar are easiest on your blood sugar and insulin level. Therefore, these nutrient-dense meals are less likely to cause weight gain. Plus, well-balanced meals that are low in sugar and refined carbs are the most satiating.

Can You Lose Weight by Decreasing Sugar Intake?

It’s encouraging when small changes make a difference. In one study, researchers asked a group of adults to reduce their sugar intake. Without making other changes, those who cut back on sugar lost almost 1.7 pounds over 8 months. In contrast, adults who didn’t curb their sugar eating gained around the same amount of weight. If you consume sugar-sweetened beverages and eliminate them, the results may be more dramatic. Studies show that we don’t feel as full when we consume liquid calories.

The take-home message? Wean sugar out of your diet and replace refined carbohydrates and ultra-processed foods with whole foods or minimally processed ones. You’ll eat less and be more satisfied. Plus, you’ll have room in your diet for more nutrient-dense foods and that’s better for your health.