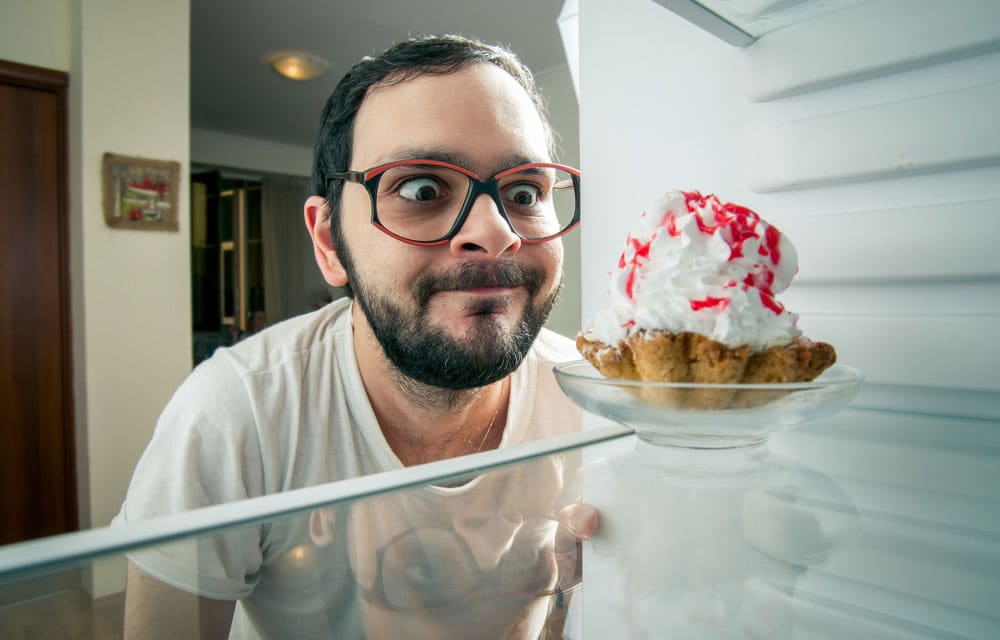 Do you find yourself heading to the kitchen just before bedtime for a pre-sleep snack? You’re not alone!  Research shows that cravings for sugary foods often increase at night. It’s not healthy to eat sugary snacks any time, but munching on a doughnut or sticking a spoon into a pint of mint chocolate chip ice cream before bedtime may be worse for you than eating these foods during the day.

Research shows that people who load up on sugary and high-calorie fare close to bedtime are more likely to be overweight or obese. Although this is only a correlation, it makes sense, doesn’t it? You don’t have many opportunities to burn off the calories you eat at the end of the day. Plus, research shows the body’s ability to handle sugary foods is reduced in the evening. Insulin sensitivity drops, so the calories you take in are more likely to be stored as fat rather than used as fuel.

Why do sugar cravings tend to strike in the evening after dinner, and are people really more likely to hunger for sugary treats in the evening? Researchers at Harvard Medical School designed a study to look at this issue. They asked 12 normal-weight, healthy adults to live in a controlled laboratory setting for 13 days. In this environment, the researchers closely monitored when they ate and slept. What they found was that the participants felt the most hungry around 8 P.M. and least hungry at 8 A.M. So, the evening is a vulnerable time for snacking on the wrong stuff.

Blame It on Your Clock!

Why might this be? The researchers believe this pattern of feeling hungry in the evening is hardwired into our biological clock and the circadian rhythms that arise from this internal clock. Circadian rhythms are the natural rhythms that dictate many physiological functions, including hunger, sleep, and the release of hormones, including ones that control mood and metabolism. Eating more at night made sense during primitive times when food was scarce. Now, when food is so readily available at all hours of the day and night, it’s a recipe for obesity.

Based on the concept of circadian rhythms, meal timing may impact weight loss and weight control. A study published in Cell Metabolism found that mice that ate a low-calorie diet only lost weight when they dined during the hours they would normally be active. Mice are active at nighttime, but in the case of humans, the daylight hours are when most people are out and about or working. If this study applies to humans, it suggests that cutting back on calories might be ineffective if you consume those calories during periods when you’re least active. These findings suggest that when we eat matters, too!

Back to sugar cravings. For some people, cravings can be hard to ignore, even if they are hard-wired into our internal biological clock. It’s all too easy to act on them if you have easy access to sugar. Another reason the desire to eat sugar can increase in the evening is that the activities people do, like watching television, go well with snacking. The refrigerator is down the hall and it’s easy to slip into the kitchen for a pre-bedtime bite. During the day, you’re more likely to be tied up with work, family, and getting things done. Your mind is focused on other things. If the day is stressful, you take those stressors home with you and the kitchen is the place you head to get some stress relief.

Also, studies of twins who are genetically identical suggest that the desire to consume sugar is partially genetic and partially a learned behavior. Based on genetic differences, some people are more susceptible to sugar cravings. What makes sweet stuff so rewarding? Consuming something sweet stimulates the release of dopamine, a brain chemical linked with reward. Who doesn’t like feeling rewarded? So, we tend to seek out foods that stimulate the release of dopamine. People who are more prone to sugar cravings may have a learned or genetic imbalance in their dopamine system. Some studies show that the brains of obese people light up more in response to sugar than people who are leaner.

Based on the results of a variety of studies, here are some things that science suggests will help control cravings:

·        Gradually cut back on all sugar. Do it slowly to avoid frustration. Then watch your taste buds and desire to eat sugar gradually drop off. It may take a few weeks or a few months, but it works.

·        Clean out the cabinets and fridge. Eliminate tempting foods that you eat too much of once and for all. Studies show we’re more likely to eat what’s easily available.

·        Take five minutes. When a craving strikes, make yourself wait five minutes before indulging it. Find something fun to distract yourself. Using a delay tactic or distraction can often break the hold of a craving.

·        Eat a protein-rich breakfast. Research suggests that eating a high-protein breakfast boosts dopamine in the brain to help keep this hormone balanced and prevent cravings.

We may be hard-wired, to some degree, to nibble on sugary foods in the evening but that doesn’t mean those cravings have to get the best of you. Try the tactics above to gain control over those urges to eat the wrong stuff. Sugar is empty calories. Even worse, some studies link a high intake of sugary foods and refined carbs with health problems. So, nix those sugar cravings once and for all!