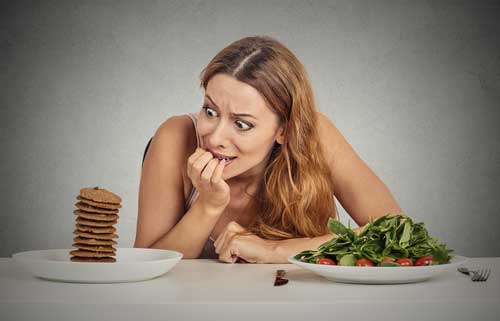 Cravings for the wrong foods are a major roadblock to weight loss. It’s okay to occasionally give in to a craving, even when you’re trying to eat healthy, but it’s best not to make a daily habit of noshing on fatty, sugary fare. The best way to keep those cravings at bay is by making dietary choices that are healthy AND fill you up. Here are 6 satiating foods that’ll help you keep those cravings in check.

Popeye’s favorite leafy green is a craving buster. Surprised? In a study published in the journal Appetite, researchers gave participants a spinach water drink or a placebo to drink first thing in the morning. Those who drank the spinach beverage felt less hungry after breakfast and three hours later. They also felt less compelled to reach for sugary snacks later in the day.

What makes spinach so satisfying? Nestled inside the membranes of spinach leaves is a group of compounds called thylakoids. When you eat a bowl of a spinach salad, these thylakoids activate an appetite-suppressing hormone called GLP-1. Plus, you get all of the other health benefits spinach offers. Although there are lots of ways to enjoy spinach, making spinach smoothies is one of the best. The blending action breaks open the plant cell membrane and release the thylakoids.

Eggs almost always top the list of most satiating foods, thanks to their protein content. One study showed overweight women who consumed a breakfast of eggs experienced increased satiety and consumed fewer calories throughout the day compared to those who ate an equal amount, from a caloric standpoint, of a bagel. Eggs are a high-quality source of protein, rich in leucine, an amino acid important for satiety and for building lean body mass when you challenge your muscles through resistance training.  Skip the bagel and start the day off with an omelet or a few eggs prepared your favorite way. You’ll eat less later!

Although relatively high in natural sugars, an apple contains a fiber-like compound called pectin that slows glucose absorption and helps you feel fuller longer. At only 95 calories for a medium one, an apple is a caloric bargain. Plus, a medium-sized fresh apple supplies 14% of your daily requirement for vitamin C and contains phytochemicals that may lower your risk for certain forms of cancer. There’s a reason you still hear the old phrase, “An apple a day keeps the doctor away.” Stick with whole apples, preferably organic, and skip the apple juice and apple sauce. A study published in the journal Appetite showed they don’t have the same satiety benefits as the whole fruit.

Surprised to see this one? Yes, low carbers avoid potatoes because they’re high in carbohydrates, but they still help with hunger control. In one study, researchers compared the satiety effects of almost 40 foods. Guess which one topped the list as most satiating? Boiled potatoes. In this study, boiled potatoes were 7 times more satiating than croissants!

Concerned about the carbs in potatoes? After cooking potatoes, place them in the refrigerator overnight. When exposed to the cold, some of the starch in the potato is converted to resistant starch, a fiber-like material your body can’t absorb.  Not only is resistant starch satiating, but it also helps reduce the blood sugar response to a meal, so it’s good for your metabolic health.

Plus, bacteria break down resistant starch into short-chain fatty acids that are healthy for your colon. When you eat a meal high in resistant starch, it also may also improve the absorption of some minerals, including zinc and calcium. Potatoes get a bum rap, but they’re not all bad, especially when you prepare them in a healthy way – like boiling or baking.

Almost any kind of soup is a good meal starter, although you might want to avoid the heavy cream-based ones. Several studies show that if you eat a bowl of soup prior to a meal, you’ll eat less when the main course is served. Why is soup so appetite-taming? According to a study published in the European Journal of Clinical Nutrition, soup slows down stomach emptying and that makes you want to eat less. Grab a healthy soup cookbook and go to town. It’s the perfect pre-meal accompaniment for fall and winter.

When you tire of eggs begin the day with a bowl of hot oats. Oatmeal contains B-glucans, a fiber-like material that increases the release of  CCK, an appetite-suppressing hormone from the small intestines. B-glucans, present in the cell walls of cereals, have another benefit – they help lower LDL-cholesterol and act as an additional source of heart-healthy fiber. They also slow the rate of glucose absorption after a meal and help keep your blood glucose level more stable.

Sprinkle nuts and flaxseed on your morning bowl of oatmeal for even greater satiety benefits. Give yourself bonus points if you eat a hard-boiled egg with your oatmeal!

To crush cravings, stay away from sugary foods and snacks as well as processed carbs. Sugar and refined carbs are rapidly absorbed and cause a rapid rise and drop in blood sugar. As your blood sugar falls, you experience a drop in energy level and increasing hunger. Foods made with white flour and sugar are among the worst offenders. Eating sugary foods begets cravings for MORE sugary foods. Better to break the cycle by eating more protein and fiber-rich foods.

Start with some of these foods in the morning – oatmeal and an egg or make a spinach omelet. How about an apple for a snack? Spread a little almond butter on apple slices and you’ll reduce cravings even more while getting heart-healthy fats and protein. Include these foods in your diet and limit sugary, refined ones and watch those cravings become less frequent.

Psychology Today. “One Of The Best Foods to Manage Hunger Throughout the Day”