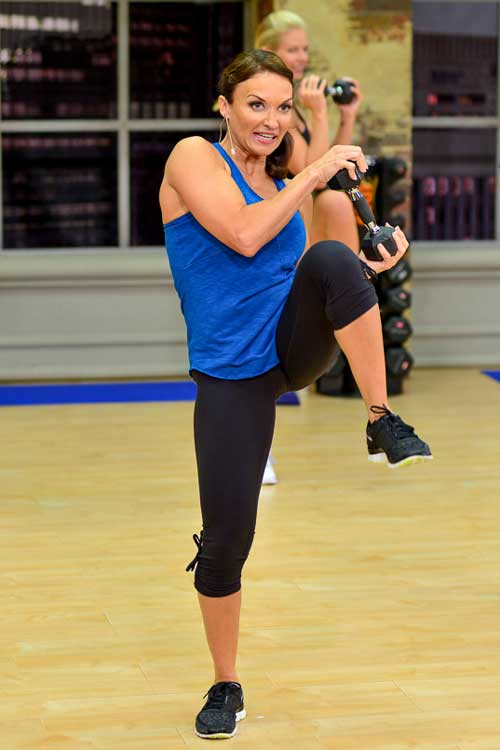 Exercise greatly increases your body’s energy needs. No surprise there! To fuel exercise, your muscles use a high-energy compound called ATP.  ATP doesn’t appear out of nowhere. Your muscles store only a small amount of ATP as creatine phosphate, enough to power about 10 seconds of intense exercise. Most ATP your muscles need for fuel comes from the breakdown of the food that you eat, fat and carbohydrates.

Cells use dietary macronutrients, mainly carbohydrates, and fats, to produce ATP through a complex series of reactions. These reactions can take place in the presence of oxygen or without oxygen when oxygen is a limiting factor. The pathways that make ATP without oxygen are called anaerobic energy pathways.  Protein is used to a lesser degree to fuel exercise and only under certain conditions, during prolonged exercise or when your body’s muscle carbohydrate stores (glycogen) is depleted.

Fuel Use during Exercise

How does your body decide whether to burn fat or carbohydrates as its main source of fuel? This is an important question not just from a fat burning standpoint but for endurance athletes. Endurance athletes, like long-distance runners, need to conserve glycogen stores as much as possible so they can run longer without “hitting the wall.” Using more fat as fuel conserves glycogen and helps them make it to the finish line without pooping out. Here are five factors that affect which source of fuel your body primarily uses during an exercise session.

Why does this change over occur? Oxygen-requiring, or oxidative pathways, for producing ATP are slower and require oxygen. As exercise intensity increases, blood lactate levels also rise. High blood lactate levels and the drop in pH that goes along with it reduce your body’s ability to use fat as a fuel source. Plus, oxidative pathways are slower. As exercise intensity increases, the slow oxidative pathway won’t cut it. That’s when carbohydrates become the predominant fuel source. Of course, your body is always using fat and carbohydrates to some degree – it’s just that the proportions change.

You might think staying in the fat oxidation or “fat-burning” zone, below 75% of heart rate max, would be of benefit if you’re trying to lose weight because you’re mostly using fat as a fuel source. It’s true that you burn a higher percentage of fat when you’re in the fat-burning zone, but you burn more total calories when you exercise at a high intensity. Plus, vigorous exercise activates fat-burning hormones like growth hormone, testosterone and adrenalin more than exercising at an intensity that burns predominantly fat. Despite the lower percentage of fat burned during high-intensity exercise, total fat burned is generally higher because you expended more total energy and calories and continue to burn fat at a higher rate during the recovery phase. So much for working out in the fat-burning zone.

How long you exercise impacts fuel selection. During long periods of exercise, your body increasingly oxidizes fat as a fuel source. Unfortunately, during prolonged exercise, especially if you haven’t fueled up beforehand, your body also breaks down muscle tissue and your liver uses the amino acids to make glucose. So, you may burn more fat during long-duration exercise but you also jeopardize the gains you’ve made in muscle mass through resistance training.

What and when you eat prior to a workout also affects fuel selection and usage. When you eat a carbohydrate meal prior to a workout, your body will use more carbs as fuel since that’s what’s readily available. Plus, eating a high-carb meal prior to exercise puts the brakes on fat oxidation by boosting insulin release. Insulin can hang around for several hours after a meal and block fat breakdown. It’s insulin’s job to make sure cells are well fueled, that glucose and amino acids get into cells and fat stays in adipose tissue. As a result, insulin can rain on your fat-burning parade. That’s why some people recommend doing cardio in a fasted state, so there’s less insulin to interfere with fat burning.

Fasted cardio sounds good in theory. If you’re exercising at a low to moderate intensity, it may be a good option, but if you’re doing a high-intensity workout where your body needs carbohydrates as a fuel source, your performance may suffer, As a result, you may burn fewer total calories because you’re forced to scale back the intensity. The composition of your diet on a daily basis can have an impact too. When you eat a diet lower in carbs, you train your body to more efficiently tap into fat as a fuel source.

Whether You’re Male or Female

Research suggests women are better able to oxidize fat as fuel during exercise relative to men. As a result, they use a higher proportion of fat as a fuel source during low and moderate intensity exercise.  Interestingly, men oxidize a higher ratio of fat to carbohydrates compared to women at rest.

One advantage of regular aerobic exercise is it “trains” your body to tap into fat stores as a fuel source. One study showed as little as four weeks of aerobic exercise increases fat oxidation during exercise. Regular aerobic training has a number of favorable effects that make it easier for your body to use fat as fuel. Endurance exercise increases the number of ATP-producing mitochondria inside muscle cells, increases enzymes that help mitochondria make ATP and increases oxygen delivery to these tiny ATP producers. So, endurance training enhances the ability of cells to make ATP through oxidative pathways.

Your body predominantly uses fat and carbohydrates for fuel. Which it uses a higher proportion of depends on these factors. To some degree, you can modify fuel usage through diet and the intensity and duration of your workouts.