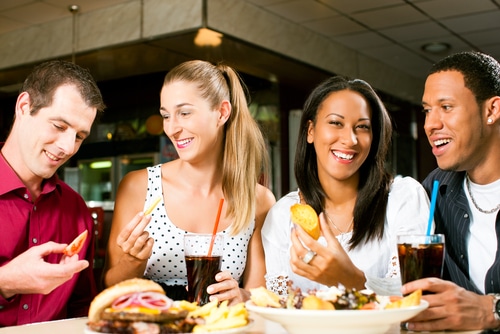 Some people skip meals because they’re so busy they forget to eat. Others do it intentionally in hopes it’ll help them lose weight. That kind of thinking can backfire on you. There are a number of reasons not to skip meals. For one, your body responds to periods of food restriction by slowing down the rate at which it burns energy. It essentially goes into “conservation mode.” That’s not what you want if you’re trying to shed body fat.

Secondly, skipping meals can cause you to feel sluggish as your blood glucose levels drop. After all, your brain uses glucose as fuel. Now a new study published in the Journal of the American Medical Association highlights another reason why skipping meals isn’t smart. It can motivate you to make higher calorie food choices when you finally do eat.

Does Skipping Meals Cause You to Compensate by Overeating?

Researchers at Cornell University carried out an interesting experiment. They asked a group of participants to fast for five hours prior to grocery shopping. Before “shopping,” they gave some of the participants’ crackers to reduce their hunger before making their selections. When the participants shopped for groceries without eating beforehand, they chose more high-calorie items than those who had eaten crackers to reduce their hunger.

In a separate study, researchers monitored the selections participants made at various times of the day. During times they would typically be hungry like the late afternoon and early evening before dinner, the shoppers selected more items that were higher in calories.

What does this mean? It appears that even relatively short periods of fasting, equivalent to skipping a meal, can alter the food selections you make. When participants in this study didn’t eat for even short periods of time, it influenced their selections and shifted their food choices to higher calorie offerings. No wonder they tell you not to grocery shop when you’re hungry! The obvious message here is to avoid skipping meals and make a trip to the grocery store AFTER you’ve eaten, not before.

If you’re planning on eating out at a restaurant, eat something low-calorie and filling before you head to a restaurant like an apple or a cup of soup. Just like shopping for groceries when you’re hungry increases the chance that you’ll choose something higher in calories, going to a restaurant after skipping a meal is likely to do the same thing.

Have you ever visited a restaurant when you haven’t eaten in a while? Everything on the menu sounds good and you’re less likely to think about what you’re ordering from a health standpoint. Your appetite hormones are in control and urging you to make high-calorie selections. It’s easy to let down your guard when you’re starving and let self-control fly by the wayside. You may be tempted to order an appetizer, entrée, AND dessert. With the portion sizes restaurants serve that could easily be 1500 calories or more for a single meal.

Surprisingly, the meal people skip most is the one they most need – breakfast. After an overnight fast is when your body most needs energy. Stepping out the door to go to work without eating can leave you tired and mentally sluggish before you even start your day. Plus, you’re more likely to select something unhealthy from a vending machine or a doughnut in the break room that some well-meaning rep brought in when you go to work hungry.

Make sure you’re eating something healthy that contains some protein every three to four hours. Skipping meals and not eating breakfast is a short-sighted strategy that can backfire on you and cause you to consume more calories at later meals. Eat at regular intervals and choose what you eat wisely.

If you don’t have time to prepare breakfast in the morning, prepare oatmeal in the slow cooker overnight or whip up a fruit and Greek yogurt smoothie with a scoop of protein powder first thing in the morning. Keep hard-boiled eggs in the refrigerator ready to grab for those mornings you’re way behind. Keep high-protein snacks like string cheese and nuts at the office to snack on when hunger strikes. They’ll help you avert a trip to the vending machine. Skipping meals and skipping breakfast won’t help you lose weight – it’ll just leave you feeling tired and hungry.