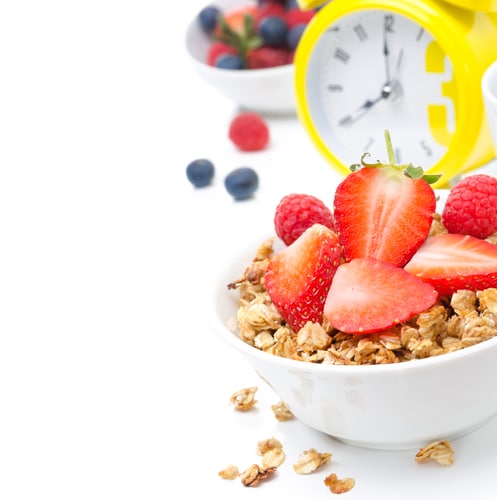 Sure, what you eat and how much you eat matters whether you’re trying to lose weight or maintain it. Load your plate up with unhealthy foods high in fat and sugar and you’ll see your weight loss stall – if you start losing it at all. But what about WHEN you eat? There’s been less attention focused on the issue of meal timing. Does the timing of your meals have any impact on weight control?

One of the few studies to look at this issue was a recent study involving 420 obese Spanish men and women selected to take part in a 20-week weight loss program. The participants were divided into two groups based on when they ate their main meal of the day. “Early” eaters ate their main meal before 3:00 P.M. while “late” eaters enjoyed their primary meal after this time. For these groups, their primary meal was lunch as is customary in Mediterranean populations.

At least in this study, there were advantages to eating the biggest meal earlier in the day. The early eaters lost more weight and lost it at a faster rate than late diners. In fact, the early eaters averaged 22 pounds of weight loss over the 5-month study while those that ate lunch after 3:00 P.M. lost 17 pounds on average. They also had greater insulin sensitivity, a positive when it comes to weight control.

Interestingly, calorie intakes, the amount of energy they expended and the amount they slept was similar between the two groups. Levels of leptin and ghrelin, two hormones that regulate appetite, were also the same in both groups of participants. One characteristic that distinguished the early eaters from the late eaters was the late eaters skipped breakfast more often or ate a less substantial breakfast.

Eating Breakfast is an Issue Too

Why is breakfast an important part of the equation? Several studies show that people who skip breakfast have a more difficult time controlling their weight. There are several reasons for this. For one, people who skip breakfast overcompensate by consuming more calories in the day. Another study showed that skipping breakfast negatively impacts insulin sensitivity. That can be a problem if you’re trying to lose weight. Plus, insulin resistance can lead to metabolic changes that increase the risk of type 2 diabetes. One study showed that insulin levels were significantly higher in subjects on days they skipped breakfast. In addition, skipping breakfast has been linked with higher BMI. Eating breakfast and eating the main meal early in the day may have its advantages when it comes to your waistline!

Interestingly, based on this recent study, meal timing appears to impact weight independent of calorie intake. One theory, based on animal research, is eating later in the day negatively affects the body’s internal clock, disrupting its natural timing and altering metabolism and energy storage. Some studies show that nocturnal mice that normally eat at night gain more weight when they eat during the day. In addition, people with a syndrome called night-eating syndrome that eat most of their calories in the evening are at higher risk for obesity.

It’s hard to draw conclusions based on a single study but there is some evidence that “frontloading” calories, eating more earlier in the day and dining lighter in the evening makes it easier to control weight. Eating a healthy breakfast is also part of a successful weight control formula. Also, it appears that eating at “odd” times of the day – late in the evening or in the middle of the night, for example, might have downsides if you’re trying to lose or control your weight. In this case, you’re interfering with your body’s natural “rhythms.” This could affect energy expenditure and insulin sensitivity.

One bit of evidence to support this is shift workers are at greater risk for metabolic syndrome, suggesting that they have problems with insulin sensitivity. One study looking at shift workers found those who ate breakfast and light meals spaced over the day were less likely to develop metabolic syndrome while those that ate a heavy dinner were at highest risk.

Eat regular meals, don’t skip breakfast, don’t “save up” your calories for the evening and eat a bigger lunch than dinner. Pay attention to when you eat. It seems to matter.