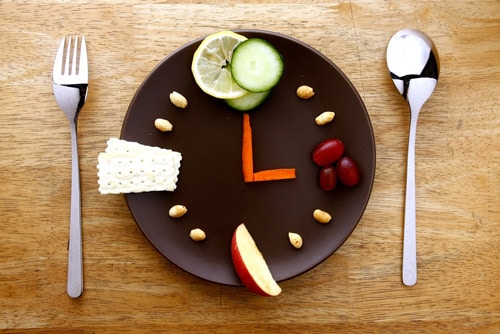 When do you eat dinner? Do you dine on a late lunch/early dinner and then shut down the kitchen for the evening – or do you eat dinner at 9:00 P.M. and then fall asleep? Sometimes you don’t have control over when you eat. Based on your schedule, you might eat late or even top off dinner with a pre-bedtime snack. The question is whether meal timing matters. You may have heard dietitians and other experts say that eating a meal or snacking before bedtime makes it harder to lose weight. Is there any truth to this?

Meal Timing: Does Eating Late in the Day Make It Harder to Lose Weight?

By now, you’re probably wondering what science says about the issue of meal timing and eating late in the day. In animal studies, eating a big meal late negatively impacts metabolism and leads to weight gain – but what about humans?

To address this issue, researchers at the Pennington Biomedical Research Center carried out a small study. They asked 11 overweight men and women to eat during different time periods for 4 days. In one case, they ate between 8 A.M. and 8 P.M. In the other, between 8 A.M. and 2 P.M. The second schedule would correspond to eating a late lunch and not eating again until the next day. All 11 participants ate during each time-period but at different times and each ate a similar number of calories.

What they found was eating during the shorter time-period (8 A.M. to 2 P.M.), equivalent to eating a late lunch and not eating dinner, was better for keeping hunger in check than eating over a 12-hour time period. (8 A.M. to 8 P.M.) It was also linked with greater fat burning during the night. Not eating after 2 P.M. also increases metabolic flexibility, the ability to better switch between fuels (carbohydrates or fat) based on what’s in your diet. For example, if you eat a meal high in fat, your body is better able to use that fat as a fuel source when you have greater metabolic flexibility. People who are more metabolically flexible are less likely to have metabolic issues, like insulin resistance.

What’s less clear is whether eating in a shorter time frame and earlier in the day leads to actual weight loss. However, it does appear that eating earlier increases fat-burning during sleep and keeps hunger in check. That works in your favor when you’re trying to lose body fat. However, if you subscribe to the “calorie is a calorie no matter when you eat it” philosophy, you still might be skeptical. If you’re eating the same number of calories, why should it matter WHEN you eat them?

Are All Calories Created Equal?

Increasingly, the concept of all calories being equal is being questioned. There’s growing evidence that your body processes calories differently based on the composition of that calorie. Factors like hormones, the composition of what you eat, how active you are, and, yes, even when you eat impacts the processing of your meals and snacks as well as the likelihood of those calories being stored as fat. If you buy into the “all calories are equal” theory, then a 500-calorie brownie and a 500-calorie plate of broccoli have the same impact on your bottom line. Intuitively, that doesn’t sound right, does it?

If you burn an equal calorie quantity of broccoli and brownie in a calorimeter, they would each yield a similar amount of energy as heat. Yet when you put these foods into a complex system, like the human body, things get more complicated. You have the effects of hormones like insulin, leptin, cortisol, growth hormone and other key players that get turned on and off in response to what you’re eating and, potentially when you eat it.

In terms of diet composition, what if you eat a meal very high in fiber? Your digestive tract doesn’t absorb fiber well and some of the fat calories you’re eating get sucked out with the fiber. So, one food can affect the absorption of others and the calories your body absorbs. What you eat can subtly affect your resting metabolism as well. Your body expends more energy to process dietary protein than it does carbs or fat.

Then there’s the impact food composition has on hunger. Suppose you eat a meal of processed carbs and another meal with a lean protein source and vegetables. Both are roughly equal in calories. Chances are that processed carb meal will make you hungry in a few hours while the second meal will not. The composition of the calories you eat affects hunger, blood sugar, feelings of satiety, metabolic rate, and hormones. So, all calories are NOT created equal in the complex environment of your body. Yes, you can lose weight by reducing your calorie intake, but the composition of what you eat can still make it harder or easier to stick to a calorie restricted diet. If you’re eating mostly processed carbs, hunger will be a problem that even willpower might not overcome.

Back to the topic of WHEN to eat. Is eating late at night more likely to cause weight gain? According to Kelly Allison of the University of Pennsylvania School of Medicine’s Center for Weight and Eating Disorders, the answer is “yes.” She points out that the body processes nutrients in foods differently later in the day. The ability to burn fat declines as does insulin sensitivity. So, the carbohydrates you take in are more likely to stay in your bloodstream and cause a rise in blood sugar and insulin.

Why does meal timing matter? One theory is that your internal biological clock that responds to light and darkness orchestrates factors like glucose control and fat burning. When you eat late at night, your body simply isn’t primed to burn off the extra calories you take in. Plus, most people are also less active later in the day. However, not all sources agree. The U.S. Department of Agriculture’s Weight Control Site states that it doesn’t matter when you eat. It comes down to how much you eat and how many calories you expend – it’s the old “calorie is a calorie” concept.

If you’re trying to control your weight and protect your metabolic health, eating earlier in the day may serve you better. This issue isn’t completely settled but, based on some studies, eating late simply isn’t good for your waistline. But what’s more important is to make the right dietary choices – whole foods, of course.

Science Daily. “Eating dinner early, or skipping it, may be effective in fighting body fat”

The Washington Post. “Why eating late at night may be particularly bad for you and your diet”

Late-Night Eating: Does It Increase Your Risk for Weight Gain?

3 Causes of Late-Night Eating and How to Correct Them