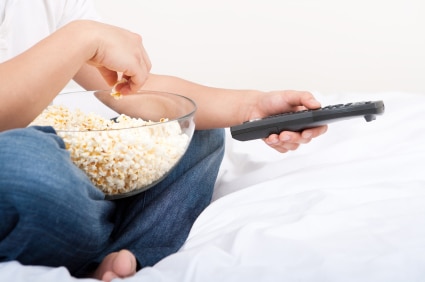 Do you head to the refrigerator for a late-night snack before hitting the sack? Whether or not late-night eating leads to weight gain has been a subject of debate for many years, and the issue still isn’t resolved. One recent study showed no link between eating late at night and weight gain. But before you head to the fridge at 10:00 P.M. for a late-night snack, consider this. A recent study showed that eating after 8:00 P.M. at night can add inches to your hips, thighs, and waistline.

So should you or shouldn’t you snack after dinner? There’s no consistent evidence that late-night eating causes weight gain, but people who eat late at night often choose the wrong foods and are less mindful of how much they eat. Let’s face it. Most end of the day snackers aren’t chewing on broccoli spears or devouring a bowl of salad. It’s more likely they’re noshing on pretzels, ice cream, and other high-carb comfort foods. Is there a way to stop late-night eating?

Ask Yourself Why You’re Eating

Many people snack after dinner because they’re bored rather than hungry. If you’ve gotten enough calories during the day, hunger shouldn’t be an issue in the late evening. Chances are you’re mindless snacking out of boredom. But before you grab that handful of chips, ask yourself if you’re really hungry. If you find you’re munching because you’re bored, make a list of other boredom-relieving activities. Take the dog for a brisk stroll around the block, take a warm bath or sip a cup of caffeine-free tea. Don’t make food a form of entertainment if you want to keep your waistline trim.

If you’re skipping breakfast and not getting enough calories during the day, you may be late-night snacking because you’re legitimately hungry. Keep a food diary for a few weeks, and record everything you eat along with its calorie content. Make sure you’re not under-eating for your height, weight and activity level.

Under-eating and eating late at night is a bad combination. Your body tries to hold onto every one of those late-night calories when it’s underfed, and there’s a good chance you’re not making the best food choices after dark.

Start the day with a healthy breakfast that contains protein and complex carbohydrates. Get some lean protein with each meal and snack you eat during the day to stay full and to stabilize your insulin levels so you’re less likely to experience late-night cravings that’ll send you strolling to the refrigerator.

Reduce Stress in Your Life

Stress is another common cause of late-night snacking. Some people turn to food for emotional comfort. Before reaching for the ice cream container, do some yoga moves or other light exercises, then take a warm shower. Brush your teeth with mint or cinnamon toothpaste to subdue your appetite. Make sure you’re not using food as a way to relieve stress.

If All Else Fails

If you’re legitimately hungry and really need a late-night snack, choose it wisely. Some good options are air-popped popcorn, a container of low-carb yogurt, a small bowl of oatmeal, a plate of edamame, a cup of miso soup, or raw fruits and vegetables with tasty, low-fat dip. These late-night snacks won’t give you a muffin top or make you feel guilty the next day. Don’t make late-night eating a habit, and if you eat after dinner on occasion, make the right food choices.

The New York Times. “Does Late-Night Eating Cause Weight Gain?”

Late-Night Snacking: is It Linked with Weight Gain?