Can the Scent of an Enticing Food Reduce a Craving?

Can the Scent of an Enticing Food Reduce a Craving? 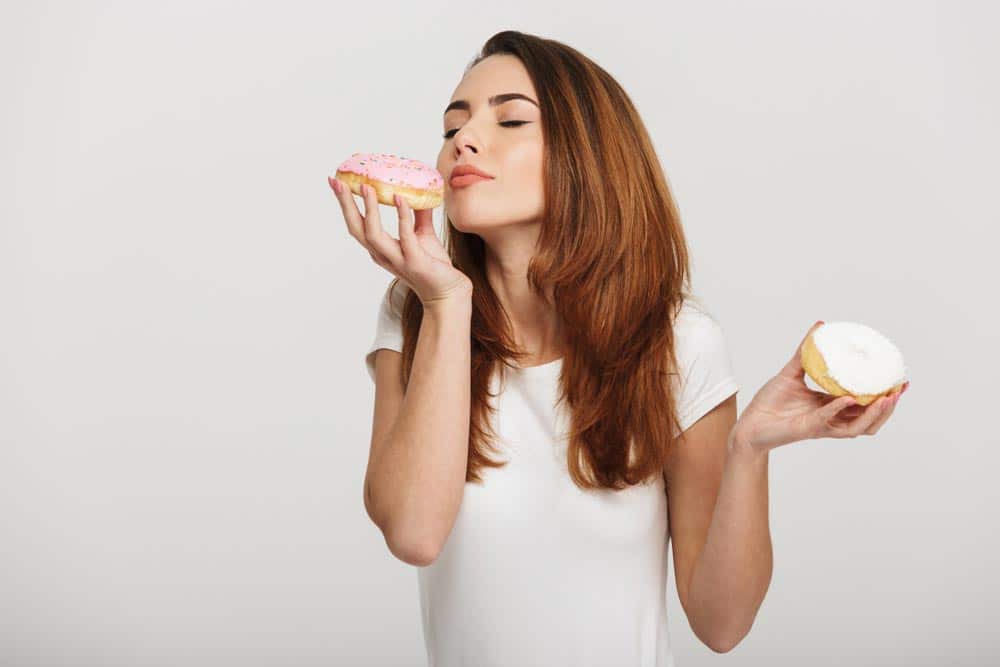 You smell the scent of freshly baked doughnuts as you walk past a trendy, pastry shop on the way to work. For a few minutes, you’re drawn to that doughnut shop and the irresistible aroma of freshly baked flour and sugar with colorful icing and sprinkles on top. It’s true that whiffing the aroma of something enticing makes you want to eat it. But surprisingly, a study suggests that inhaling those tempting aromas may reduce the cravings to eat that unhealthy dessert if your timing is right.

In the study, published in the Journal of Marketing Research, researchers exposed subjects to the aroma of various foods. They didn’t tempt them with the actual foods themselves but spritzed a nebulizer that filled the air with the scents of various healthy and unhealthy foods. Some of the foods the participants were exposed to were the aroma of apples, pizza, strawberries, and cookies, foods we can all relate too!

As the participants inhaled the aroma of unhealthy food, like cookies, they initially wanted to bite into that cookie. During the first 30 seconds of exposure, the desire to munch on the cookie was strong. But, after 2 minutes of inhaling the cookie aroma, they no longer craved the cookie and wanted strawberries instead! Researchers got similar results when they gave the subjects whiffs of pizza. Less than 30 seconds after sniffing the aroma, the desire to eat pizza was strong, but at the 2-minute point, the participants no longer wanted pizza and desired apples instead.

Can a Whiff Satisfy a Craving?

The best way to avoid eating something indulgent is not to expose yourself to it in the first place, but if you do catch a whiff, keep sniffing. At this study showed, repeated whiffs and more exposure may curb the desire to indulge. It might even boost the desire to eat something healthy like a piece of fruit instead!

Why does inhaling the aroma of an enticing food for a brief period boost the desire to eat it but you don’t feel like eating it 2 minutes later? Your senses habituate to the aroma. When you first smell a fragrant, but unhealthy food, the scent is novel. But, just as the first bite of something is always the best, your senses become tolerant to the taste and aroma and it doesn’t elicit as strong of a response. Brain pathways that were initially excited by the novel scent stop firing with such frequency. The aroma has become old news.

Habituation is a well-described phenomenon and it’s a mechanism by which we adapt to our environment. Here’s another example. When you first walk into a room with a distinct aroma, the fragrance is noticeable, even pungent. But, if you sit in that room long enough, the smell gradually becomes less obvious. By the time you leave the room, the smell may not register at all.

Some researchers believe that we can harness the power of habituation to help with weight control. How can this work for you? Narrow down the food options you eat every day so you aren’t tempting your nose and taste buds with too many novel stimuli. Research shows we eat more when there are more food options available. This explains why an all-you-can-eat buffet is such a waistline destroyer! Too many food options and too many choices. It’s hard to habituate when there is an almost unlimited number of new foods to try.

The Power of Smell

These studies show the power of scent and the impact it has on food choices. For example, catching the scent of freshly baked apple pie might bring back memories of childhood and a parent who baked delicious comfort foods that made you feel safe. Those aromas unconsciously hijack our brain in a positive or negative way. The craving you have for a piece of apple pie isn’t true hunger but the need to feel comforted.

In fact, that’s what distinguishes cravings from true hunger. When you’re hungry, you desire almost any food. When it’s true hunger, you’re not picky about what you eat. Even an apple sounds enticing. In contrast, cravings are directed toward specific foods, often unhealthy ones. They’re also often triggered by stress. Food cravings turn on parts of the brain involved in memories and reward. Researchers have used functional imaging studies to show how reward areas of the brain light up when people crave certain foods.

One of the best ways to distinguish a craving from true hunger is to ask yourself if you’d be satisfied with an apple. If the answer is yes, you’re hungry. But, if only a chocolate brownie or chocolate chip cookie will suffice, it’s a craving.

Other Smell Hacks to Curb Cravings

Other studies show a whiff of dark chocolate may reign in appetite. For example, a study published in Regulatory Peptides found that subjects who whiffed 30 grams of dark chocolate had lower levels of the appetite hormone ghrelin afterward and felt less desire to eat.  In fact, smelling dark chocolate led to as much appetite suppression as eating it. So, the next time you crave dark chocolate, a whiff may be enough to satisfy.

Now you know some of the ways a food smells can impact how much you eat. Use them to your advantage!

Brain World Magazine. “Why Do We Crave? The Science Behind Food Cravings”

Can a Food’s Aroma Affect How Much You Eat?

Changing How You See Food Can Help You Eat Less

Can Foods With a Strong Smell Help You Lose Weight?