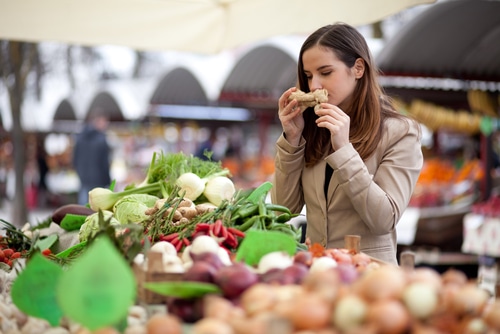 The aroma of certain foods can whet our appetite for them. Who can deny the smell of fresh-baked cookies makes us want to reach for one once they come out of the oven. According to some research, there are differences in how obese and normal-weight people smell food. Since smell is so closely linked with taste and appetite, could this partially explain why overweight and obese people have more difficulty controlling their weight?

Could this heightened smell sensitivity explain why some people keep eating even after they’re full? Researchers in this study speculate that decreased awareness of food aromas over time may be an adaptive mechanism that helps to control food intake in normal-weight people. It’s possible this system doesn’t work as well in overweight people.

Most people are unaware of the influence smells have on their appetite and how much they eat. People with a condition called anosmia, the inability to smell odors, often suffer from loss of appetite and lose weight as a result. Food doesn’t have the same appeal when you can’t smell it. We have taste buds on our tongue that detect sour, salty, sweet, bitter and savory flavors, but taste is also influenced by smell through a process called “olfactory referral.” If you don’t believe your sense of smell is important, try holding your nose while tasting something and notice how the taste disappears.

Some research suggests that smell or aromatherapy may be useful for appetite control. In a small study carried out at Wheeling Jesuit University, researchers asked participants inhale the aroma of peppermint every two hours throughout the day. They carefully monitored their food intake by having the participants keep a food diary and had them rate their hunger. On the days participants inhaled the peppermint aroma they consumed fewer calories, experienced fewer cravings and rated their hunger level as lower. Could sipping a cup of peppermint tea be a way to control cravings and reduce calorie intake? As a bonus, peppermint also appears to boost alertness.

In another study, female college students experiencing chocolate cravings sniffed the aroma of one of three odors – water, jasmine or green apple. The jasmine aroma hit the mark – it reduced chocolate cravings among this group of young, healthy women. The aroma of grapefruit purportedly also has appetite-suppressing effects.

Suppressing the Urge to Eat Through the Power of Habituation

There’s another way you can use the sense of smell to control how much you eat. Smell your food before starting to eat and then eat slowly. According to a study published in the journal Appetite, diners slowly habituate to the odor of a food and its flavor and feel less compelled to eat it. The more you experience the aroma of what you’re eating, the less it satisfies your senses. This explains why the first few bites of a food taste better than subsequent bites. Your senses no longer respond as strongly to it. As the study previously discussed suggests, people who are overweight or obese may remain sensitive to a particular food aroma longer than do people of normal weight.

Why we eat – and overeat – is multifactorial. It’s too simplistic to say that overweight people are overweight because they’re overly sensitive to the smell of food. Obesity and the tendency to overeat is a complex phenomenon affected by external factors like how a particular food looks, tastes, smells and feels in the mouth along with social and cultural cues that influence how food is perceived. Appetite is also influenced by internal factors like appetite hormones, genetics, how much sleep you’ve had as well as your stress level. To complicate matters further, some people munch even when they’re not hungry. Boredom can be a motivator to eat.

Still, there’s no doubt that smell plays a role in how you respond to a food and how much you eat of it. So next time your mouth waters when you catch the aroma of hot apple pie or a tray of warm cinnamon buns coming out of the oven, take a whiff of peppermint instead. It’ll save you some calories.