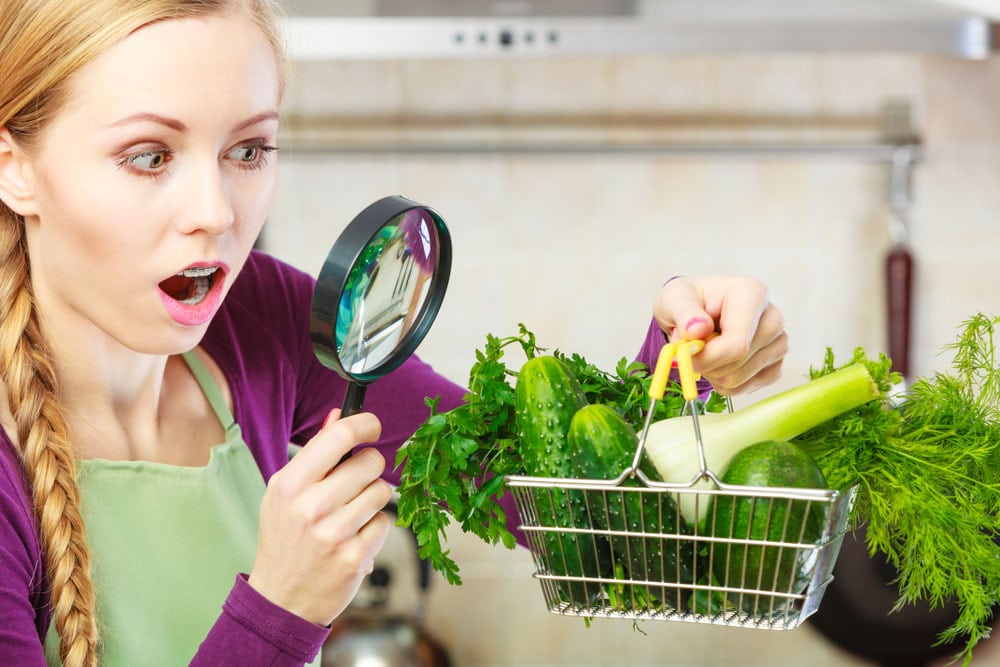 Berries are nutrient-dense, but strawberries may have some less than healthy contaminants. What are strawberries contaminated with? Pesticides. For the fourth year in a row, strawberries top the list of the dirty dozen fruits and vegetables. This distinction goes to produce that contains the highest levels of pesticides based on independent testing. When the environmental working group tested strawberries, 99% contained at least one pesticide. Some contained 81 different types of pesticide residues on a single sample. For the testing, the environmental working group analyzed over 40,000 samples of almost 50 fruits and vegetables for their pesticide content and published the results. However, strawberries are one of the best sources of vitamin C and also packed with a variety of phytonutrients. Don’t give up strawberries, but buy organic.

Protein powder is a convenient way to get a dose of protein when you’re on the go, but it’s not the cleanest way to get this macronutrient. When a non-profit called the Clean Label Project analyzed over 100 protein powders, all contained one or more heavy metals. Other independent testing groups like Consumer Report confirm these findings. Buying organic isn’t a way to avoid heavy metals either. Organic protein powders had up to twice the number of heavy metals that non-organic had and plant-based protein powders fared worse than dairy-based. It’s enough to make you want to get your protein from other sources like whole foods–and maybe you should!

Rice is a crop that absorbs inorganic arsenic from the soil, and this toxic trace element stays in the rice even after it reaches supermarket shelves. The problem of soil-based arsenic is growing because of a worldwide increase in pollution. Although arsenic is in water and other foods such as seafood, the highest levels of inorganic arsenic, the worst kind from a health standpoint, are in rice and rice products.

The real risk may lie with people who consume a gluten-free diet. Many gluten-free packaged products contain rice flour and use sweeteners like brown rice syrup. Other sources of arsenic from rice include rice milk, baby food, and rice cereal. What are the risks? Long-term exposure to inorganic arsenic may raise the risk of cancer, heart disease, and type 2 diabetes. In children, it may impact brain development. The effects are more pronounced in children since they’re still growing and they have a smaller body size.

You can’t avoid inorganic arsenic by buying organic rice since the arsenic comes from the soil. Brown rice is higher in arsenic than white rice. Therefore, it’s best to limit the amount of rice you eat and avoid concentrated sources such as brown rice syrup. Quinoa has a similar texture to rice, is higher in protein, and lower in arsenic.

Turmeric is a spice that contains a compound called curcumin. Some studies suggest that curcumin has anti-inflammatory activity. You might also recognize turmeric as an orange-yellow spice that gives Indian and Thai food its fragrance and taste. It’s a healthy addition to a recipe but be cautious about where you buy it.

A study found that some turmeric powder from Indian and Bangladesh is tainted with lead, a heavy metal that can cause brain damage in children. The source isn’t the soil, as with rice and rice products. Some unscrupulous manufacturers add lead to increase the weight of the product. One way to lower the risk is to purchase spices, including turmeric, domestically. A study by the New York City Health Department and Mental Hygiene tested over 3,000 spices. Over half contained lead and 30% contained more lead than the allowable limit. Samples imported from overseas contained the highest quantities of lead.

Not only does romaine lettuce make the dirty dozen list for pesticide exposure, but it’s also one of the highest risk foods for bacterial food poisoning. In 2018 alone two Romaine lettuce outbreaks sickened 272 people, sending more than half of the people to the hospital and led to the death of five. Two more outbreaks in 2019 impacted hundreds of people.

The culprit in these food poisoning cases is  E.coli, a common bacteria. Not all E.coli strains are harmful. The ones that cause food poisoning come from the guts of animals and enter the soil through feces. One source is undercooked meat, but these bacteria can affect produce through cross-contamination. Most people experience nausea, vomiting, and diarrhea, but pathogenic E.coli can cause more serious illness, including kidney failure or death.

Unfortunately, it’s difficult to wash the offending bacteria off of lettuce. E. coli is tenacious and stick to the crevices of the lettuce. That’s why romaine lettuce tops the list of foods that cause food-borne illness. On the plus side, California growers of Romaine agreed to adopt more stringent standards when producing their lettuce.

Even healthy foods and spices can contain contaminants harmful to health. Be an educated shopper and choose your sources carefully. Also, eat a diverse diet so you aren’t getting too much of any one food.

LiveScience.com. “How Does Arsenic Get Into Rice?”

HealthLine.com. “How to Avoid Lead Exposure from Spices”