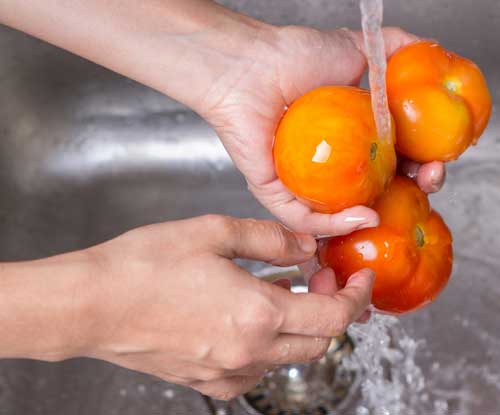 When you’re trying to eat a clean diet, the last thing you want to think about is pesticide residues on the fresh produce you’re eating, but, unfortunately, it’s a concern. Unless you buy organic fruits and vegetables, the yummy veggies and fruits you’re eating likely contain traces of pesticides.

According to an investigation carried out by Consumer Reports, the number of pesticides on produce, once it reaches the supermarket, varies dramatically even on fruits and vegetables grown in the U.S.A. No doubt those pesticides end up in your body. According to the Centers for Disease Control and Prevention, the average person has traces of 29 different pesticide residues in their body.

The good news is Congress passed the Food Quality Protection Act in 1996. Fortunately, this has led to declines in the levels of pesticides on produce. One way to greatly reduce your exposure to pesticides is to buy organic fruits and vegetables – but that’s not always practical. For one, the demand for organically grown foods is outstripping the supply, causing prices on existing organic offerings to rise. What you don’t want to want to do is NOT eat those “oh so good for you” fruits and veggies because of pesticide fears. So, how can you reduce your exposure to pesticides? How about washing?  Does washing fruits and vegetables remove the “bad stuff?”

You should definitely rinse produce thoroughly before preparing it, even organic fruits and vegetables, but it’s unlikely you’ll remove all the pesticide residues. Trace chemicals stick to the nooks and crannies of fresh fruits and vegetables and they’re hard to remove by simply holding produce under running water. Plus, not all pesticides dissolve in water and the ones that don’t aren’t removed at all. On the plus side, one study found almost 75% of the pesticides on produce were REDUCED by washing. Unfortunately, some pesticides can penetrate the skin of the fruit or vegetable and these you can’t remove by washing or rinsing.

Does cooking vegetables remove pesticide residues? The healthiest way to prepare veggies is to steam them. A quantity of pesticides on vegetables enters the steam and is removed, but the amount is small. You’d have to steam vegetables for a long time to substantially reduce the pesticide content and you’d destroy some of the vitamins in the process.

You can remove more pesticides (and bacteria too) by using a soft brush to scrub the outer skin and hard to reach areas of firm fruits and vegetables. It’s probably NOT a good idea to use detergents or vegetable wash to wash produce. You run the risk of detergent residues remaining on the item. A better approach is to soak or clean fruits and vegetables with a vinegar wash – 3 parts water to 1 part vinegar.

You can also reduce pesticide residues on produce by peeling it. Unfortunately, skins and peels are high in fiber and often contain healthy phytochemicals as well and you lose them when you toss the outer skin. Plus, peeling won’t remove pesticides that penetrate the skin of the plant. Interestingly, blanching, boiling, and frying reduce pesticide levels, but frying isn’t a healthy way to prepare vegetables and boiling destroys vitamins. At the same time, drying fruits and vegetables in a dehydrator, a.k.a dried fruit, concentrates pesticides.

Does Eating Organic Produce Reduce Your Exposure to Pesticides?

If you have access and the funds, buying organic produce is the way to go. One study involving 4,500 adults found those who usually ate organic produce had 65% lower levels of pesticide products in their urine relative to those or didn’t eat organic. You definitely can reduce your exposure to pesticides by buying organic fruits and veggies and there are compelling reasons to do so. Most produce contains residues from multiple pesticides, not just one.

Although there’s no guarantee that the organic produce you buy doesn’t have trace quantities of pesticide due to run-off, the quantity should be dramatically lower. Despite the fact that organic produce isn’t necessarily better for you from a nutritional standpoint, it IS healthier from a pesticide perspective.

Kids Are Most Susceptible

The age group that gets the most benefits from eating organic is children. Kids who are actively growing are most susceptible to the effects of toxins, and chemicals from pesticides that stay in a child’s body longer. The younger the child, the more potential there is for health repercussions. As a child’s organs develop, including the brain, cells divide very rapidly, creating more opportunity for toxins to damage the inside of cells. The risk begins early – in utero. A study showed a link between levels of pesticides in a pregnant woman’s body and lower IQ in a child after birth. Some chemicals in the environment alter hormone levels too and this can have widespread health implications.

Buy Organic When You Can

Based on the information that’s out there, it’s best to buy organic when you can, especially if you’re preparing meals for kids. This is especially true of fruits and vegetables on the “dirty dozen” list, those that are most likely to have higher levels of pesticide residues. Here are some that usually make the list:

If you buy one fruit or vegetable organic, make it apples. Although loaded with fiber and healthful phytochemicals, apples always make the “dirty dozen” list and typically have multiple pesticide residues remaining on them. Sadly, apple peels are where many of the healthful compounds are concentrated. For health reasons, it’s best to peel apples if you’re not buying organic or at least soak them in 3 parts water to 1 part vinegar.

Fruits and vegetables are good for you. Don’t avoid them due to pesticide fears. Choose organic produce as often as possible and clean and rinse each item thoroughly using a vegetable brush or soak firm produce in a dilute vinegar solution when you buy conventional. Although unproven, the benefits of eating vegetables, with their abundance of healthy phytochemicals, likely outweigh the pesticide risk as long as you clean your produce properly.