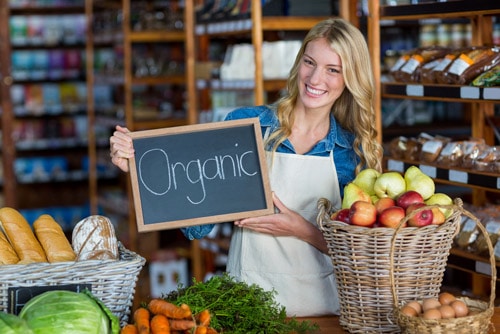 The interest in organic foods has never been stronger. Why is organic so trendy? These days, more people are concerned about what goes into their body and where the food they eat comes from – and organics are thriving in response. In fact, some supermarkets struggle to meet the demand for organic produce when there simply aren’t enough growers. The type of food people are most likely to buy organic are fruits and vegetables. A breakdown of statistics by the United States Department of Agriculture showed that in 2012:

Despite the strong demand for organic food, myths still abound about what organic produce is and the benefits it offers. Let’s debunk some of the most common myths about organic foods.

Organic has a health halo in the eyes of many shoppers. When consumers hear that something is organic, they assume it’s better for them, even if it’s a cookie or a bag of chips. These days, you can buy a variety of snack foods labeled organic, many of which are high in sugar, sodium, or refined carbohydrates. The take-home message? Even if a product proudly displays the USDA certified organic label, read the “fine print” and make sure it meets the other criteria that make a food healthy. Don’t let your guard down because the package says it’s organic. Look at the whole nutritional picture. As an example, there’s a popular organic soda with 43 grams of sugar per can. What’s healthy about that?

A number of studies have looked at whether organic produce is higher in nutrients than conventionally grown fruits and vegetables. Although some studies show organic produce is slightly higher in some key nutrients, most do not. In support of organic, one study found greater levels of vitamin C and antioxidants in organic strawberries. One difference is organic produce has higher levels of chemicals called phenolics that protect food crops against predators. Plants have to make more of these chemicals when they aren’t sprayed with synthetic pesticides to shield them against insects.

While phenolics may have health benefits, not all scientists agree about this. These chemicals have antioxidant activity but it’s not clear whether ALL plant-produced antioxidants are beneficial. Still, overall, you’re probably not getting markedly greater health or nutritional benefits when you eat organic unless you take into account the lower exposure to synthetic pesticides.

Ultimately, the nutritional content of produce depends on the soil it was grown in and how far it had to travel to reach you. If fruits and vegetables set around or travel long distances, they lose nutrients, particularly vitamin C. That’s why it’s best to buy local and watch the countries of origin when you shop at the supermarket. The organic produce you buy at your local grocery store may be from Mexico or China and have traveled quite a distance.

The USDA allows food to carry an organic label if at least 95% of its components were grown or raised organically. To be entirely organic, the label must read 100% organic. What they also don’t tell you is some ingredients are exempt from the organic classification because they’re hard to find in organic form. This might include certain flavorings or oils. So, organic isn’t always completely organic.

Most studies comparing the taste of organic produce to conventional in blind taste tests show people can’t perceive differences in taste. In one small study, tasters preferred conventionally grown tomatoes to organic ones, finding them to be sweeter and more flavorful. On the other hand, in studies where researchers TOLD participants coffee was organic or eco-friendly, they said it tasted better than non-organic coffee. They were also willing to pay more for the coffee and believed it had fewer calories than conventional coffee. It’s the health halo again.

Surprisingly, organic produce may have been exposed to pesticides, just not synthetic ones. Farmers can spray natural pesticides on crops as long as they don’t use equipment that was previously used to apply synthetic pesticides. Here’s the kicker. For years, scientists assumed that natural pesticides were safe – but are they? According to the University of California at Berkeley, half of all organic pesticides are likely carcinogenic. So, just because a pesticide is natural doesn’t mean it’s innocuous.

Organic Produce is Less Likely to Make You Sick

One concern about eating produce is exposure to bacteria that cause food-borne illness. Unfortunately, buying organic offers no greater protection against food poisoning. In fact, the risk may be higher with organics. In lieu of synthetic pesticides, farmers use more manure and that manure may be contaminated with bacteria from animals. So, don’t assume that an organic bag of lettuce is free of bacteria that cause illness.

So, is there any reason to buy organic? In one study, researchers measured the urine levels of organophosphorus pesticides in the urine of children. They found that kids who ate the most organic produce had lower levels of these chemicals. We’re exposed to too many toxins from the air we breathe already. Why add more? As mentioned, you aren’t completely eliminating pesticides when you buy organic since organic farmers can use certain approved, organic pest killers.

When you consider the loss of nutrition that happens when produce travels long distances, it makes sense to buy fruits and vegetables local rather than produce imported from other countries, even if they are organic. If you can’t afford to buy all organic produce, choose organic for the “dirty dozen,” the most heavily sprayed produce. This will significantly reduce the number of synthetic pesticides you’re exposed to. However, natural pesticides may still be an issue. Most importantly, keep eating your fruits and veggies!