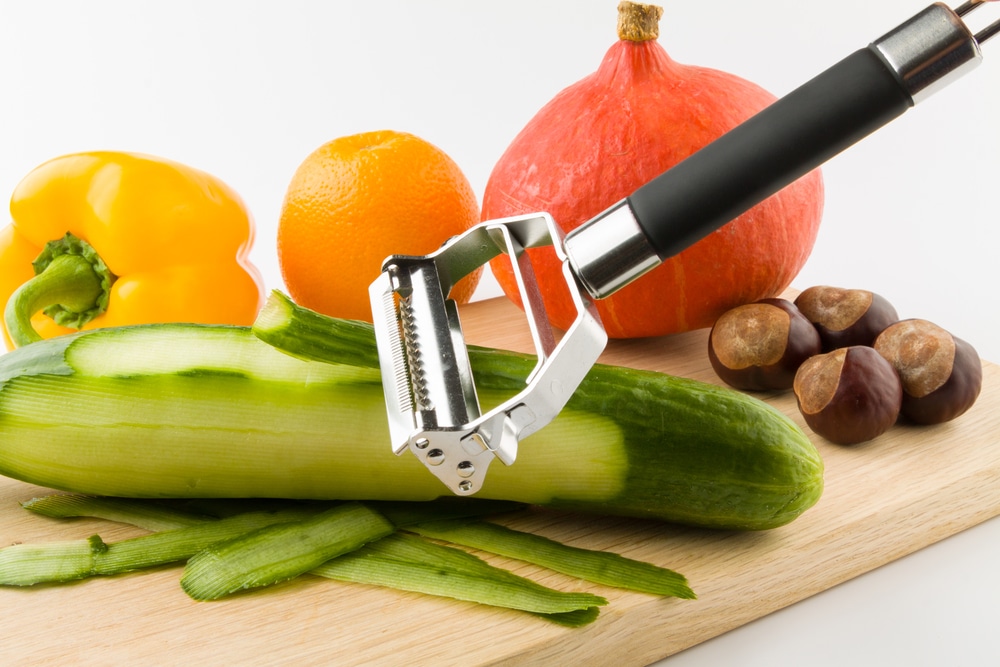 Even chowing down on five servings of produce per day may not be optimal. Recent research suggests that we might best be served by eating double that amount, 10 or more servings per day. In fact, a study showed that if people consumed 10+ servings daily, almost 8 million deaths could be prevented around the world.

One concern people have about eating fresh produce is the pesticides they’re sprayed with. How much of a problem is this? A survey carried out by Consumer Reports found that 85% of American are concerned about pesticides on produce. Yet, it’s more expensive to buy organic produce and it’s sometimes hard to find. If you’re consuming the recommended quantity of fruits and vegetables, the pesticide residues you’re taking in may be significant. Of course, you have the option of washing and peeling vegetables and fruits. Is that enough to remove most of the pesticides?

Washing Fruits and Vegetables: Does It Remove Pesticides?

There is some good news on the pesticide front. Research shows that since Congress passed the Food Quality Protection Act in 1996, pesticide residues on produce have declined, yet testing still shows that half of the conventionally grown produce has at least traces of pesticides still on it. What impact does washing and peeling produce have?

Unfortunately, research shows that peeling alone is not enough to eliminate pesticides. Pesticides can penetrate into the underlying flesh of the fruit or vegetable and not be accessible to peeling. Even washing a piece of produce thoroughly doesn’t remove all traces of pesticides. For example, a study carried out in the U.K. found that after thorough washing, a chemical linked with birth defects persisted on the skin of apples. Washing doesn’t always remove pesticides even from the surface of a fruit or vegetable.

Surprisingly, cooking may have an impact on pesticide levels. For example, a study found that residues of insecticides used on apples were not completely removed by washing the fruit but were reduced by cooking them. Because the peel is where most of the pesticide residue is concentrated, a number of sources recommend removing the skin unless you buy organic.

Peeling isn’t optimal for health either. That’s because antioxidants and much of the fiber of a fruit or vegetable resides in the skin or peel. Removing the skin eliminates some of the health benefits you get when you eat a fruit or vegetable. According to one source, the peel of an apple has between 2 and 6 times the fiber that the flesh does and contains more antioxidants as well. Yet, apples almost always make the list of fruits and vegetables you should buy organic due to the heavy use of pesticides. So, what’s the solution?

Ideally, buy organic produce since it’s clear that washing and peeling isn’t a surefire way to remove all traces of pesticides. Plus, the skins and peels offer health benefits that the flesh doesn’t. Also, be aware that organic doesn’t necessarily mean pesticide-free either. Organic farmers are allowed to use natural pesticides and there’s evidence that these pesticides, too, have health risks. That comes as a surprise to people who have visions of organic produce being completely pesticide-free. That’s why you should wash ALL fruits and vegetables before preparing them. Plus, washing may remove some potentially harmful bacteria.

Are There Other Options?

If buying organic is cost prohibitive, visit your local Farmer’s market and learn about the farming practices of the vendors. Ask about the types of pesticides they use. Most are forthright and often feed the produce they grow to their family, so are more concerned about the use of pesticides than larger farms. Some even farm organically but simply don’t have the money to become USDA certified organic. It’s a long and lengthy process that’s cost prohibitive for some small farmers.

What about frozen veggies and fruits? Buying frozen may lower the pesticide load as well. When fruits and vegetables are frozen for distribution, they’re prepped extensively and this process seems to remove more of the pesticides residues. In most cases, frozen fruits and vegetables are just as nutritious, in some cases, even more so since they’re frozen just after harvest. Freezing locks in the nutrients.

Tips for Reducing Your Exposure to Pesticides

If you buy conventional fruits and vegetables, here are some tips for reducing your exposure to pesticides:

·       Wash produce using water before preparing. Don’t use detergent or cleaners since these may leave harmful resides of their own. Studies show that plain water is as effective as produce washes. A produce brush will also help you get into the nooks & crannies.

·       Use a knife to remove bruised areas before eating or preparing.

·       If you can’t buy organic, buy produce grown in the United States or fruits and vegetables grown locally.

·       If possible, choose organic for fruits and vegetables on the “dirty dozen” list.

·       Frozen fruits and vegetables are not only convenient – they may be lower in pesticides too.

Most experts still agree that it’s important to eat your fruits and vegetables and believe that the beneficial phytochemicals in produce outweigh the exposure to traces of pesticides. Still, do what you can do reduce your exposure. The greatest harm may be to children since they have faster metabolic rates relative to adults. So, for kids, be especially mindful of prepping fruits and vegetables to reduce pesticide residues. But keep in mind – it’s important that kids get their fruits and veggies!

Centers for Disease Control and Prevention. “Data and Statistics”
United States Department of Agriculture. “Food Availability and Consumption”
The Telegraph. “Eat 10 fruit and veg a day for longer life, not five”
Consumer Reports. “Eat the Peach, Not the Pesticides”
The Telegraph. “How those pesticides persist even when you wash your fruit and veg”
Genetic Literacy Project. “Myth Busting on Pesticides: Despite Demonization, Organic Farmers Widely Use Them”

6 Tips for Making Healthier Choices at the Grocery Store