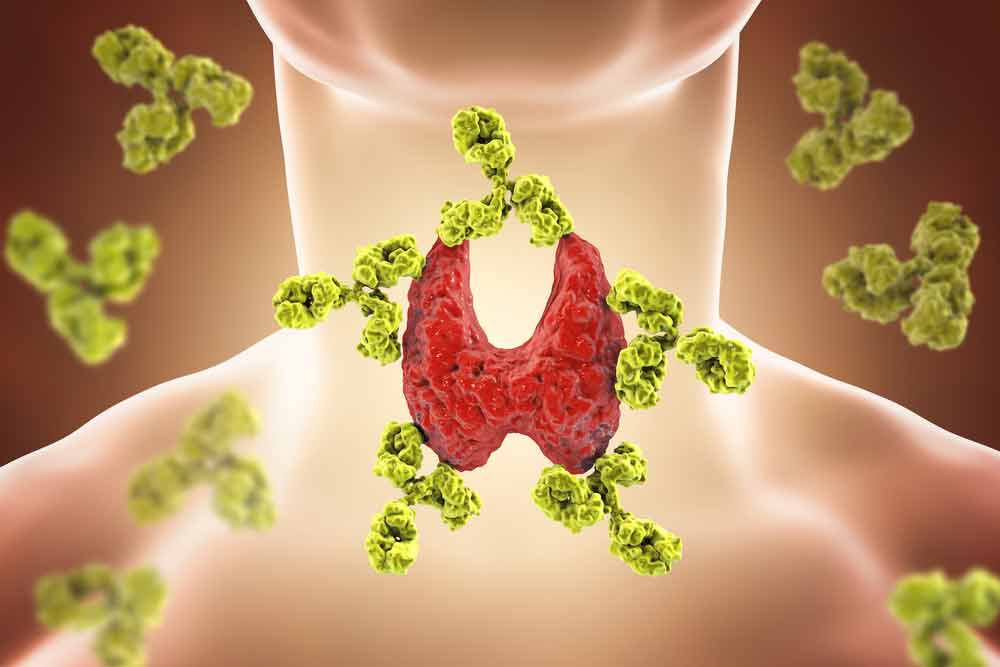 The thyroid is the master gland that sets your metabolic rate, which means it determines how rapidly your body burns energy. This butterfly-shaped gland in your neck is a key regulator of energy metabolism, acting as a thermostat of sorts, that responds to input from your brain. Unfortunately, a lot can go wrong with your thyroid gland and thyroid irregularities are more common in women than men. In fact, one in eight women will experience a thyroid problem during a lifetime.

Unfortunately, thyroid disease is on the rise, partially because the incidence of autoimmune diseases are increasing as well. Remember, the most common form of thyroid disease is autoimmune Hashimoto’s thyroiditis. According to the American Association of Clinic Endocrinologists, as many as 27 million Americans have some form of thyroid disease and almost half are undiagnosed. So, obviously, thyroid health is an issue and some experts believe the reference ranges for what’s normal on a thyroid profile is too wide and should be revised. If these “normal” ranges were revised, as many as 60 million Americans would fall outside the normal range.

By now, you’re probably wondering what you can do to protect YOUR thyroid gland. You might also question the role that nutrition plays in thyroid health. What CAN you do from a nutrition standpoint to keep your thyroid healthy?

As mentioned, the most common cause of an under-active thyroid is autoimmune but you can also develop a sluggish thyroid gland if you consume too much or too little iodine, a mineral your thyroid needs to make thyroid hormones for healthy thyroid function. Some medications also impact thyroid function. As far as autoimmune thyroid disease, experts believe that environmental factors may play a role in thyroid problems, especially exposure to endocrine disruptors, factors in the environment that disrupt healthy thyroid function. Endocrine disruptors behave like a hormone but actually interfere with normal hormonal signaling.

Unfortunately, we’re exposed to potential endocrine-disrupting chemicals from the environment almost every day and they’re in the food supply as well. For example, industrial chemicals, flame-retardant chemicals, and triclosan in anti-bacterial products, including hand sanitizers and toothpaste, have been linked with thyroid dysfunction in some studies. In fact, triclosan closely resembles thyroid hormone in structure, meaning it can potentially bind to the very receptors where thyroid hormone binds and block its activity. In animals, exposure to triclosan is linked with a reduction in thyroid hormone levels.

As mentioned, iodine is important for healthy thyroid function but too much can actually block the production of thyroid hormones. Although you sometimes hear that we should be consuming more iodine, in developed areas of the world, iodine excess is more of a problem than insufficient iodine. For example, commercial salt contains added iodine. Sea vegetables are another concentrated source of this mineral and are also rich in other minerals, but it’s probably not a good idea to eat sea vegetables every day due to the risk of getting too much iodine.

Soy is another controversial dietary component as some experts believe it can reduce thyroid hormone activity if you eat a lot of it. A dietary component that reduces thyroid function is called a “goitrogen.” Goitrogens disrupt thyroid function by blocking the uptake of iodine by thyroid cells, making it less available. Surprisingly, even some highly healthy foods, like cruciferous vegetables, may have some ability to act as goitrogens if you eat enough of them, especially if you eat them raw.

Should You Avoid Foods That Are Potential Goitrogens?

Soy is a good source of plant-based protein – but is it harmful to your thyroid? While it does contain goitrogenic compounds, particularly genistein, getting enough iodine in your diet should offset any negative effects from consuming soy. Since most of us get iodized salt in our diet, iodine deficiency isn’t typically a problem. Plus, cooking soy changes the structure of the goitrogens and makes them less active. So, cooking soy is a way to reduce any goitrogenic effects. Fermenting soy, to produce tempeh or miso, has a similar effect. The same applies to cruciferous vegetables, like broccoli. Steam it lightly to offset some of its goitrogenic potential. Even if you eat it raw, you would probably have to eat a lot to reduce the activity of thyroid hormones. What you want to avoid is taking a soy or isoflavone supplement. The same applies to cruciferous vegetables, eat them in food form and avoid concentrated sources like supplements.

Since we know that compounds in the environment may disrupt thyroid function, eating more organic foods and consuming hormone-free sources of meat and dairy may lower your risk of thyroid problems.

Also, make sure you’re getting enough selenium, a trace mineral, in your diet. In a study, supplementing with selenium (200 micrograms/daily) decreased TPO antibodies in people with an under-active thyroid due to Hashimoto’s thyroiditis. You can get TOO much selenium, especially if you take a supplement. The best food source is Brazil nuts and you can get enough by eating 1-2 Brazil nuts daily.

Thyroid problems are common in women, especially an under-active thyroid due to Hashimoto’s thyroiditis. Now, you know a bit more about how diet impacts the thyroid and what you can do to potentially lower your risk.

Thyroid Health: How to Keep Your Thyroid Gland Healthy

Problems Controlling Your Weight? It Could Be Your Thyroid

4 Powerful Hormones and How They Impact Your Weight

Not Losing Weight? Here 6 Are Possible Reasons Why

2 thoughts on “What Role Does Diet Play in Thyroid Health?”