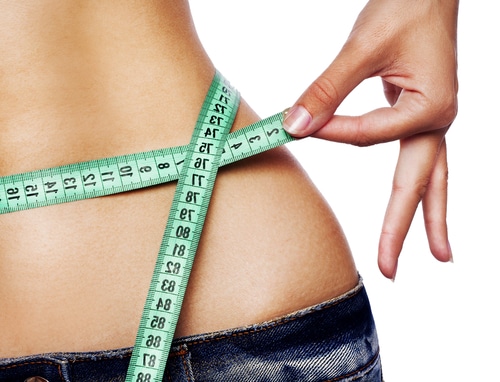 Once you’ve changed your eating habits and reached your ideal body weight, there’s a new challenge, keeping it off. The reality is most people who successfully lose weight gain it back. Not that you’re destined to regain the weight you lost but there are physiological factors that work against you after losing weight including the effects of hormones that control your appetite and metabolism. Here are the key hormones that make it harder to maintain your weight after losing it.

You’re probably already familiar with leptin, a hormone produced by fat cells that tells your brain what your energy status is. When there’s plenty of fat energy stores around, leptin sends a signal to a portion of your brain called the hypothalamus. This signal says you’re well fed. As a result, your appetite is subdued and you aren’t tempted to raid the refrigerator or the nearest vending machine.

Why does leptin make it easier to put weight back on? Leptin levels drop when you take in fewer calories, skip a meal and when you lose weight as your body senses low energy stores. When this happens, you wage a battle with hunger. To make matters worse, leptin affects your metabolic rate too. When leptin levels are low, your metabolism slows down. So you have two things conspiring against you when your leptin levels drop – increased hunger and a slower metabolism. Not a good combination.

Once you’ve lost weight and resumed a less restrictive diet, do your leptin levels return to normal? Not necessarily. Researchers at the University of Melbourne found a group of obese people who lost an average of 14% of their body weight still had low leptin levels a year after stopping a low-calorie diet. Other bad news. The participants gained back half of the weight they lost even though they followed a maintenance diet.

Leptin isn’t the only major hormone that controls your appetite – there’s ghrelin too. Ghrelin might best be called the “hunger hormone.” It’s secreted by the lining of the stomach and small intestine and plays a role in controlling hunger on a short-term basis. When you haven’t eaten a meal for a while, ghrelin levels rise and they fall after eating. But ghrelin has a longer-term impact on weight control too. Research shows that ghrelin levels over a 24-hour period are higher after a person loses weight. That leads to an increase in appetite and makes it hard to avoid overeating. Ghrelin is another player that works against you when you’re trying to maintain your weight after losing it.

Hormones produced by your thyroid, T4 and T3 control your metabolic rate. T3 is the active form of thyroid hormone and it goes down with calorie restriction and after you’ve lost weight. As you might expect, this slows down your metabolic rate so you burn fewer calories. One reason thyroid hormone levels drop is your body adapts to a lower calorie diet by slowing down the rate it uses energy. That kind of adaptation can make your life harder.

A study showed another possible reason thyroid hormone levels drop after weight loss. You have toxins safely sequestered inside your adipose tissue. Here, it’s stored without harming your body. When you lose body fat, these toxins are released into the bloodstream. Researchers found that organochloride compounds released from fat cells with weight loss seem to decrease levels of T3, the active form of thyroid hormone. This causes a drop in metabolic rate that makes it easier to regain the weight you worked so hard to lose.

How Do You Fight Your Hormones?

Even though appetite hormones like leptin and ghrelin make it more difficult to control your appetite, you’re still in control. The best-kept secret for weight maintenance is exercise – both aerobic and resistance training. Research consistently shows that people who exercise are more successful at maintaining a lower weight once they lose it. When you resistance train you get the added benefit of increasing your lean body mass. This helps to offset any slowdown in metabolism as a result of the weight loss. Some studies also show that exercise helps with appetite control, especially high-intensity exercise.

Here’s another suggestion. Keep a food journal so you become aware of mindless eating and snacking. It’s easy to let down your guard after you’ve reached your goal weight and go back to your old eating habits. As a result, the pounds slowly creep back on.

It’s also important to weigh twice a week, first thing in the morning, and make modifications to your diet based on your weight. Take a proactive approach – respond quickly to weight changes, exercise regularly and keep a food journal to keep you on track. You can be a successful loser and keep it off. It takes discipline, motivation, and self-awareness but it’s worth it.

Sumithran, K. P. (2012). An investigation of physiological adaptations to weight loss. The University of Melbourne.

Ghrelin and Regulation of Body Weight.

4 Powerful Hormones and How They Impact Your Weight

What Role Does Diet Play in Thyroid Health?

Problems Controlling Your Weight? It Could Be Your Thyroid

Why Decreasing Calories Too Much Makes It Hard to Lose Weight