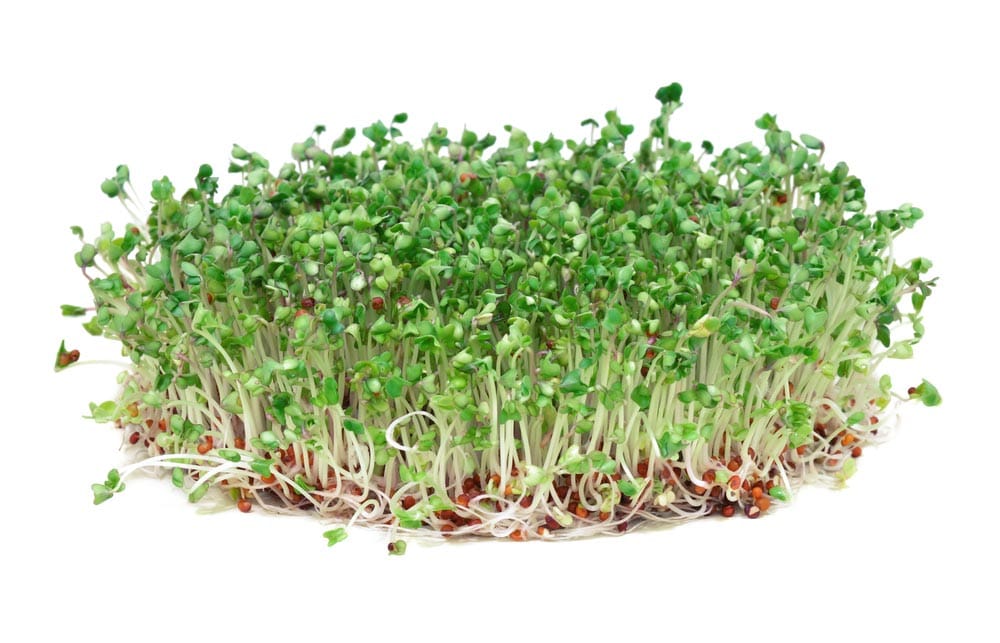 Do you top your salads with sprouts? These days, you have an abundance of sprouts to choose from. Some of the most popular are broccoli sprouts, alfalfa sprouts, clover, and mung bean sprouts and they’re readily available in little plastic packages at many grocery stores. Unlike the mature plant, sprouts are immature versions of the plant. Yet, despite their tiny size, they’re surprisingly nutritious. Sprouts are also a good source of vitamins A, C, and K, and some B-vitamins as well as minerals, like magnesium, iron, and potassium.

You can put sprouts to work for you in a variety of ways. Add them to a salad or toss them into a wrap, sandwich, or soup for more nutrition.  Plus, sprouts are loaded with antioxidants. So, what’s not to love about them? According to the FoodSafety.gov, there have been at least 30 food-borne illness outbreaks related to sprouts. Foodborne illness can cause more than tummy upset. In some cases, foodborne illness can lead to kidney failure and even death.

Foodborne illness, from contaminated food, is particularly dangerous for the very young, the very old, pregnant women, and those with a suppressed immune system. These groups of people are at higher risk of developing serious complications from eating a bad batch of sprouts or other food contaminated with pathogenic bacteria. The most common bacteria associated with food-borne illness is salmonella and E.coli.

Why Eating Raw Sprouts is Risky

The problem with sprouts is they grow in a humid environment. Humidity creates the ideal environment for bacteria to grow and flourish. The bacteria that contaminate the sprouts can come from a variety of sources. For example, animals can deposit waste around the sprouts and the growers can mishandle the sprouts when they harvest them. Water is another source of contamination. Water can run off from areas where livestock lives and the irrigation water can be tainted with harmful bacteria too.

When sprouts are contaminated, masses of people can be infected with potentially devastating consequences. For example, a sprout outbreak in 2011 in Germany made over 3,000 people ill and killed 30. It’s frightening to think you can actually die from eating sprouts, a food marketed as good for you.

What can you do to protect yourself? Washing the bacteria off in the sink or even soaking isn’t enough.  The bacteria hide in the crevices of sprouts and it’s difficult to wash them away. Plus, it doesn’t take a lot of bad bacteria to cause illness either. One way you can lower your risk is by cooking sprouts before you eat them. Some sources say you can remove bacteria by soaking the sprouts in a dilute solution of vinegar, but this hasn’t been thoroughly tested. So, cooking is the safest option. Don’t let sprouts hang around in the refrigerator either. The longest you should keep them is five days.

Among the healthiest of sprouts is broccoli sprouts. These immature sprouts, from the broccoli plant, are rich in glucosinolate. Plus, they contain myrosinase, the enzyme your body uses to convert the glucosinolate into compounds called sulforaphanes. It’s sulforaphanes, based on preliminary research, that have potential anti-cancer activity. According to Memorial Sloan Kettering Cancer Center, components in broccoli sprouts also help cells detoxify and may protect against some viruses and bacteria. Although mature broccoli has these healthful compounds, 3-day-old broccoli sprouts have 10 to 100 times the potential anti-cancer compounds that mature broccoli does.

Unfortunately, cooking sprouts to kill bacteria also destroys some of the enzyme, myrosinase, that protein that activates the anti-cancer compounds in broccoli sprouts. So, you won’t get the full benefits if you cook broccoli sprouts before eating them. Also, be aware that legume sprouts, including alfalfa, chickpea, mung bean, lentil, and chickpea sprouts contain low levels of toxins that may damage the immune system in some people. Johns Hopkins Medicine recommends that people with lupus avoid alfalfa sprouts as they contain high levels of a toxin called canavanine. A study found that it may worsen the symptoms of lupus, an autoimmune disease.

How about Sprouting Your Own?

A way to control what the sprouts you eat are exposed to is to grow your own. You can buy kits online to do this. The problem is the seeds can be contaminated with bacteria too. The seed itself is an ideal environment for bacteria growth as well. Even if the seed is contaminated with only a few disease-causing bacteria, the number can increase rapidly during sprouting and can even be drawn into the flesh of the sprout. So, it’s still safest to cook sprouts before eating them.

If you want to grow your own, University of California has instructions on their website that shows you how to disinfect the seeds beforehand. They recommend buying seeds certified to be free of pathogens and soaking the seeds in 3% hydrogen peroxide for 5 minutes at 140 degrees F. Then, rinse the seeds in running tap water for at least one minute. For growing the sprouts, use a sanitized container. They give instructions on their site for how to sanitize the container using bleach. It’s worth taking these extra precautions when you consider the downsides of becoming ill!

Sprouts are nutrient dense, but the risk of food poisoning increases the risk to reward ratio to the point that you might want to reconsider eating them, especially if you fall into a high-risk category. High-risk categories include being elderly, having a suppressed immune system, or being pregnant. Don’t give raw sprouts to young kids either. If you do add sprouts to your dishes, cook them first. Doing so could save you or someone in your family from an unpleasant or even deadly case of food poisoning.

Food Safety.gov. “Sprouts: What You Should Know”

The University of California. “Growing Seed Sprouts at Home”

4 Unexpected Ways to Add More Green to Your Diet