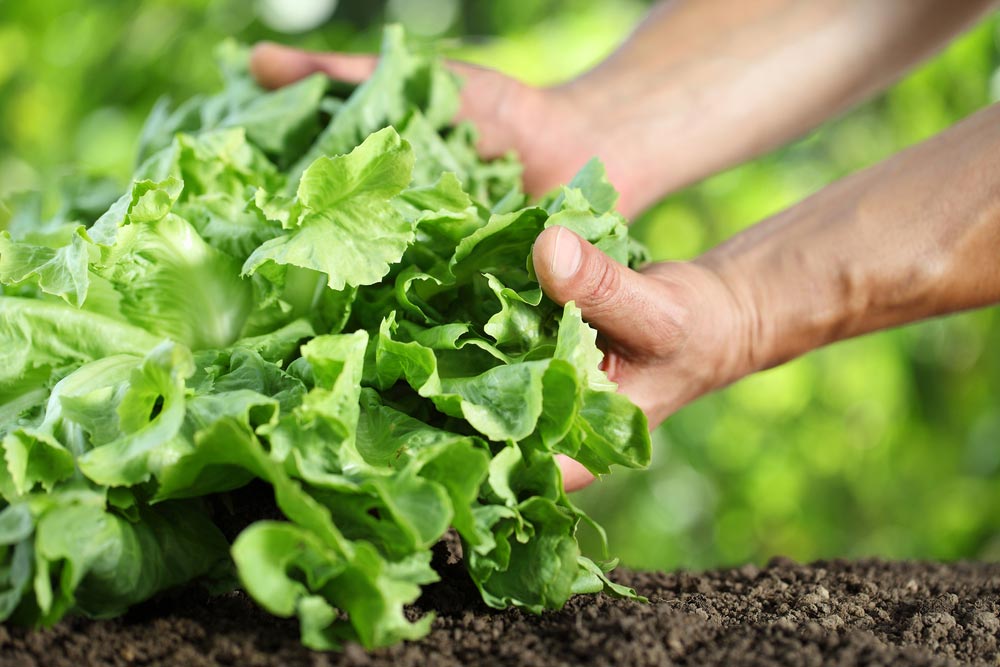 Lettuce is a basic ingredient of a salad and you have so many varieties to choose from! Once you’ve made your selection, add an array of fruits and vegetables, toss them in dressing, and get your five a day in short order. Yet, there’s something about that salad that might surprise you and take your appetite as well. Lettuce is the most common food linked with foodborne illness. In fact, leafy greens have been linked with 22% of the outbreaks of food poisoning in the last ten years.

It hasn’t always been this way. Years ago, leafy greens were involved in far fewer outbreaks of food poisoning. If there is a bright spot with regard to greens and food poisoning, leafy vegetables, including lettuce, aren’t linked with the most deaths due to food poisoning. Poultry holds that distinction. Still, falling ill after eating veggies, even if they don’t die, isn’t something most people want to experience.

Just recently, a national outbreak of food poisoning was traced to romaine lettuce. During the outbreak, about 200 people became ill and 5 died. The source of the outbreak was irrigation water contaminated with bacteria.

Is Bagged Lettuce a High Risk?

Why are lettuce and leafy greens a potentially high-risk food? The biggest risk comes from bagged lettuce, the type neatly packaged into clear cellophane bags and sold as ready to serve. Often these packages contain a variety of types of lettuce and some are mixed with other ingredients like herbs.

According to British researchers, lettuce in bags may be at particularly high risk for harboring bacteria that cause food-borne illness – but why? Once you cut and chop lettuce leaves and place them into plastic bags, the damaged leaves continue to release moisture and the moisture accumulates in the bag. The researchers found after testing the liquid in these bags that, over time, the water becomes a breeding ground for Salmonella bacteria. What’s more the water coats the lettuce leaves, and this creates sticky conditions that make it harder to wash off the bacteria.

You sometimes see packages of lettuce and leafy greens that say “triple washed.” These give a false sense of security that you’re getting lettuce that’s free of harmful bacteria. Even if the lettuce was washed beforehand, the water released from the damaged leaves encourages the growth of any bacteria that are remaining. It’s almost impossible to remove all bacteria even if the lettuce was washed before it was packaged.

The problem with lettuce and leafy greens is there are so many opportunities for it to become contaminated with bacteria. Lettuce can pick up bacteria from the soil, the water used to irrigate it, or during harvest. While still on the farm, animals, birds, and farmers themselves can contaminate it.

Once lettuce arrives at the factory and workers prepare it for packaging, there are other opportunities for contamination.  As the lettuce is cut, prepped, and packaged, water is released and some of it sticks to the inside of the packaging, creating a fertile environment for bacteria to grow and flourish.

What about those “triple washed” packages? Some sources say you should wash them again at home, despite the triple washing, but the FDA recommends NOT doing that as they’ve already been washed in an approved facility that’s likely cleaner than the inside of the average kitchen. Washing them in an unclean environment might contaminate them if they weren’t already.

Tips for Lowering Your Risk

Avoid buying pre-packaged leafy greens and lettuce whenever possible. The risk is higher with these than with loose leafy greens. If you buy pre-packaged greens, look for ones that have no moisture in the bag and aren’t damaged or discolored.

Keep leafy greens dry and refrigerated, although this won’t necessarily stop the growth of all bacteria. If the package has a “use by” date, toss it at that time if you haven’t eaten it. Even better, eat it before its expiration date, so there’s less of a chance for bacteria to grow.

Take measures to prevent cross-contamination. If you prepare salad and meat in the same area, it’s easy for bacteria from the uncooked meat to get into the salad you’re making. Always use a separate chopping board and utensils for each.

Be as cautious with organic greens as with conventional ones. Just because something was grown organically doesn’t mean it’s not contaminated with bacteria. Many people somehow think organic food is “cleaner” but the evidence doesn’t support this.

If you’re pregnant, over the age of 65, pregnant or have a weakened immune system, avoid buying bagged lettuce and greens as your risk of developing food poisoning complications is greater.

Also, keep your gut microbiome as healthy and diverse as possible. Some studies suggest that a diverse microbiome may lower the risk of food poisoning. Healthy gut bacteria compete for the same resources as bacteria that cause food poisoning. If you have a large population of “good guys” in your gut, bacteria that cause food poisoning are less likely to gain a foothold in your gut. The best way to keep your gut microbiome healthy and diverse is to eat a variety of foods high in fiber, particularly non-starchy fruits and vegetables.

Avoid eating lettuce from salad bars and at restaurants where you don’t know how the greens were handled or whether they came from a package or not. Also avoid eating sprouts, as they’re a common cause of food poisoning outbreaks. If you become ill after eating lettuce or greens, report it to your local health department, so they can trace the source.

Keep eating those leafy greens! They’re too healthy not too. But, take precautions to lower your risk of food poisoning. A brush with food poisoning can do more than make you sick to your stomach. Some people develop serious complications or die. So, be cautious about where the greens you’re putting on your plate come from.

The Healthiest Salad Greens You’re Not Adding to Your Salad