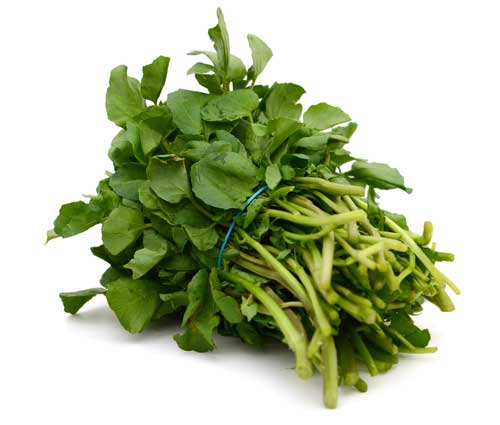 Ever noticed how some fruits and vegetables are elevated to “superfood” status while others are relegated to the backburner? According to dieticians, this has more to do with what’s hot and trendy than objective nutritional data. For example, look at kale’s meteoric rise to fame. Is it really healthier than other leafy, green vegetables like spinach?

William Paterson University in New Jersey looked at this issue. After much research, they published a list of the 41 most nutrient-dense vegetables and fruits. When you scan the list, you might be surprised. No one can deny the health benefits of kale, but it didn’t even make the top 10 list of most nutrient-dense produce. On the other hand, another lesser-known green, leafy vegetable left kale in the dust, ranking as the number one most nutrient-dense fruit and vegetable. What is it? Watercress.

What makes watercress such an elite vegetable is its abundance of “detox” and anti-cancer chemicals. It’s the richest source of a dietary component called nasturtium, which is readily converted to phenylethyl isothiocyanate (PEITC). This anti-cancer compound enhances the liver’s ability to eliminate carcinogens and toxins. It also belongs to the cruciferous family of vegetables, a veggie family known for its anti-cancer benefits. Research shows chemicals in watercress help protect DNA, a cell’s genetic material and blueprint, against damage.

The Top 5 Fruits and Vegetables

In the top five most nutrient-dense fruits and vegetables, you’ll find other green, leafy veggie options, including Chinese cabbage, chard, beet greens, and an old standby, spinach, most of which get little air time or acknowledgment as superfoods. Mustard greens, turnip greens, parsley, endive, and even romaine lettuce ranked higher than kale in terms of nutrient density.

Despite its reputation as being a cancer fighter, broccoli only scored 34 on the nutrient scale, compared to watercress at the top of the list, which ranked 100. Cauliflower, the trendy vegetable of the moment, had a relative nutrient density of 25. Don’t assume that because broccoli ranks lower than a variety of other vegetables in terms of nutrient density that it doesn’t have significant health benefits. It does.

Despite the list being a profile of most nutrient-dense fruits AND vegetables, few fruits made the cut. Among fruits, red pepper stood out with a nutrient dense score of 42, while pumpkin (32), tomato (20) and lemon (18) made the list but didn’t rank very high. Strawberries, blackberries, oranges, limes, and grapefruit were included but ranked relatively low in terms of nutrient density.

Again, this was a chart looking at nutrient density and didn’t look at other beneficial phytochemicals like antioxidants. It’s easier to analyze nutrients than it is to compare phytochemicals from one fruit or vegetable to another. The rankings also considered how diverse the nutrient content of each fruit and vegetable was. A fruit or vegetable with a high density of only one or two nutrients wasn’t as highly rated as one that had a multitude of nutrients.

The Key is to Eat More Vegetables

The Centers for Disease Control and Prevention publishes a report on the fruit and vegetable eating habits of Americans every few years. Sadly, the 2013 report showed Americans consume fruits about 1.1 times per day and vegetables around 1.6 times. This falls well short of the 5 to 9 servings of fruits and vegetables daily currently recommended for health. The message is to increase the QUANTITY of vegetables you eat, emphasizing non-starchy ones in a variety of colors. Here are some tips for adding more fruits and vegetables to your diet:

.   Add broccoli sprouts to your next salad.

.   Skip the pasta, rice and noodles and substitute spaghetti squash or cauliflower “rice,” or use a mandolin tool to make noodles out of other vegetables.

.   Use lettuce or kale leaves as a sandwich wrap instead of bread.

4. Get more nutrient value out of the vegetables you eat by eating them with avocado. It will enhance the absorption of the fat-soluble nutrients.

.   Turn fruit into dessert. Discover some of the many healthy dessert recipes you can make with fruit.

.   “Hide” vegetables in other foods. One of the best ways to do this is to make a green smoothie.

.   Experiment with veggie fries using vegetables like sweet potatoes, carrots or squash, and veggie chips. Kale chips are a popular potato chip alternative you can make at home.

.   Try baby vegetables, like baby carrots. They tend to have a sweeter taste.

.   Add microgreens to salads. Microgreens have a higher nutrient density than mature ones. They’re available at some natural food markets or you can grow them yourself indoors in a pot.

.   Visit a Farmer’s market and get inspired.

.   For convenience, get them from the freezer case. Frozen vegetables retain more of their nutrients because they’re frozen at the peak of freshness. Fresh produce often has to travel long distances and set on store shelves longer where it can lose some of its nutritional value.

Enjoy a variety of non-starchy vegetables and more of them. Don’t just go for the trendy vegetable of the moment. Veggies are low in calories and high in nutrition, so make them a priority in your diet.

Oregon State University. “Beyond prevention: sulforaphane may find possible use for cancer therapy” 1-12-15.

Centers for Disease Control and Prevention. “State Indicator Report on Fruits and Vegetables 2013”

Nutrient Profiling: What Fruit or Vegetable Tops the List?

Veggie Fast Track: Simple Ways to Get Vegetables on the Table Fast