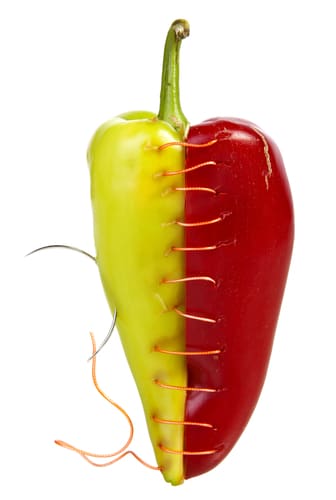 At one time when you wanted to serve a cruciferous vegetable for dinner, you made a trip to the supermarket and picked up a head of cauliflower or broccoli. These days it’s more complicated. Should you choose traditional cauliflower, purple cauliflower, regular broccoli or broccolini? Years ago, broccolini and purple cauliflower wouldn’t have been an option, but the world of fruits and vegetables is expanding rapidly as more hybrid fruits and vegetables enter the marketplace. Some people shy away from eating these unfamiliar forms of produce for fear they’re eating something genetically-modified. Fortunately, that’s not the case. Hybrid fruits and vegetables are manipulated by man, but not in the same way genetically-modified foods are.

What Are Hybrid Fruits and Vegetables?

Hybrid produce is produced by cross-pollinating two fruit or vegetable plant species within the same genus to give birth to a fruit or vegetable that has the features and nutritional benefits of both parents. The process of cross-pollination is nothing new – it happens all the time in nature. Without cross-pollination, there would be no new or novel plant species. The difference is hybridization is planned and takes place under controlled settings rather than in the open air. Some feel that this manipulation is not the same as what has happened naturally over millions of years by pollination from wind, insects, and animals and should be studied further to determine if this manipulation causes any unintended health concerns.

Genetic modification to produce new species of fruits is a different process. It uses artificial cloning and engineering techniques to change the DNA or genetic material of a plant or animal. Unlike hybridization that takes place without altering a plant’s DNA, genetic modification physically changes a plant’s genetic material by adding or deleting genes. Hybridization is more like an “arranged marriage” where two different plants are brought together and encouraged to reproduce in the usual way.

Plants may be genetically modified for a variety of reasons – to improve their nutritional profile or to make them more resistant to predators or disease. Needless to say, changing an organism’s genetic material in this manner could have unforeseen health and environmental consequences. Because hybrid fruits and vegetables haven’t had their genetic material physically altered, they don’t carry the same risks. One drawback to hybrids is seeds from the next generation won’t retain the same characteristics as the parents, so gardeners have to keep buying new seeds every year to grow the same hybrid fruits and vegetables.

Ever heard of a tayberry (a cross between a blackberry and raspberry), a rabbage (cross between cabbage and radish) or a pluot (cross between apricot and plum)? They’re just some of the hybrid vegetables that are available at supermarkets these days. If you like a diverse diet, hybrid fruits and vegetables are a way to enjoy eating more fruits and vegetables and get their nutritional benefits. Who can argue with the health benefits of brokali, a cross between kale and broccoli? Don’t be afraid to give purple cauliflower a try. The purple color comes from the higher levels of antioxidants called anthocyanins that are also found in abundance in blueberries and red cabbage. Anthocyanins may reduce the risk of heart disease and some types of cancer as well as be important for brain health. Plus, purple cauliflower certainly adds color to the dinner plate. You have more options than ever when it comes to “coloring” your dinner plate.